The "Being Charlie" director excoriates Scarborough & Co. for their refusal to acknowledge Trump's racist appeal 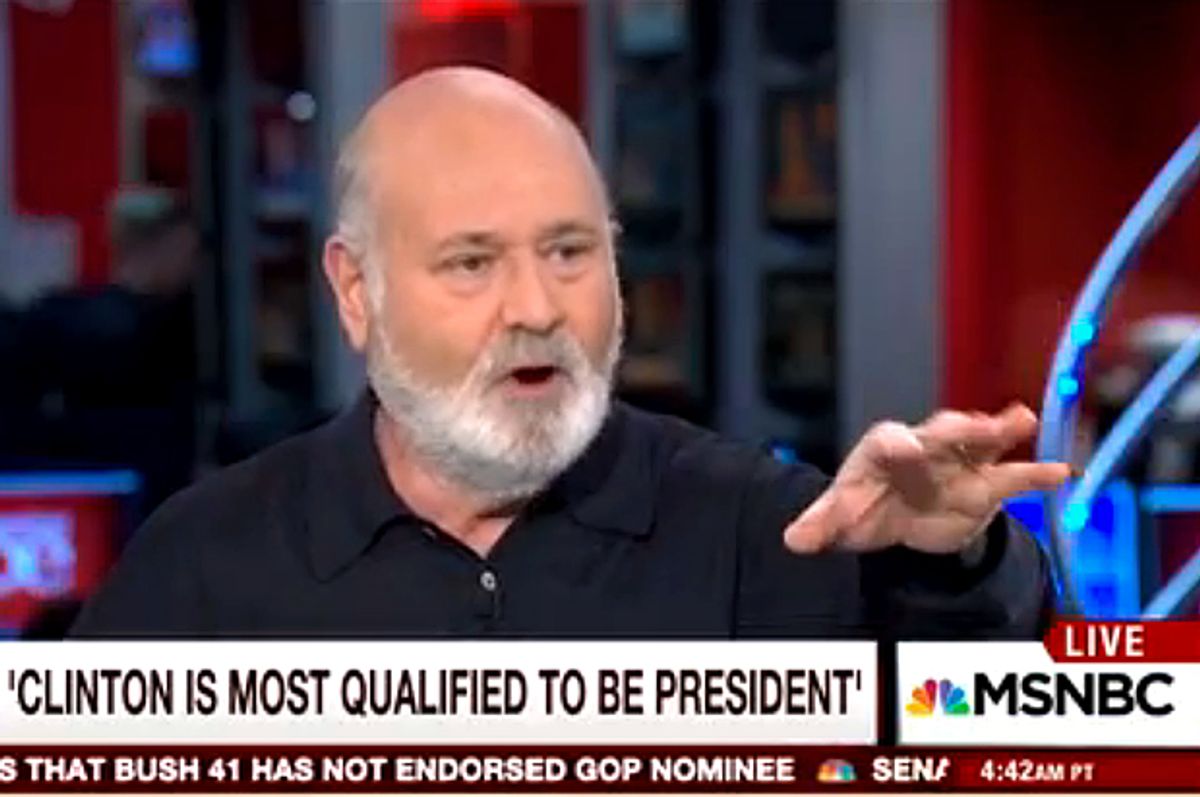 Joe Scarborough and Mika Brezenski may still be a little raw from the brutal burn they received at the White House Correspondents' Dinner from comedian Larry Wilmore, but less than a week later they were given an epic tongue lashing from another Hollywood celebrity criticizing their sycophantic coverage of Donald Trump.

"'Morning Joe' has their head so far up Trump’s ass they bump into Chris Christie," Wilmore quipped to a silent crowd at the Washington, D.C. Hilton and thunderous applause in living rooms nationwide Saturday.

Channeling the same sense of viewer frustration on Thursday, "Being Charlie" director Rob Reiner called out the media for failing to hold the reality TV star turned "presumptive" Republican presidential nominee accountable for the lies he repeatedly tells.

"He's not pinned down," Reiner argued. "We have to hold these people accountable."

The news is presented more like Hollywood entertainment, Reiner argued, a point made evident by Fox News' Chris Wallace on Wednesday's edition of "The Five." Calling it a “vicious cycle” or “virtuous cycle” depending on one’s view of Trump, Wallace admitted that television news appeared to oversaturate Trump coverage because “every time we did, it spiked the ratings. We were in a sense following what the ratings were.”

"Who cares" about ratings, Reiner demanded. "What we have to care about is, 'What does this man say?!'"

"Since the late 60s, when '60 Minutes' became a hit, all of sudden networks realized there was a profit center in news," Reiner explained. Reiner told the "Morning Joe" hosts that their three hour political gabfest is "a talk show" and "not hard news," pointing out that "the show part of it is getting bigger and bigger -- where show business and news have blurred."

"We have to ask those tough second, third and fourth tier questions," the comedian insisted of the hosts.

A frustrated Brezenski quickly shot back: “Maybe I should stick my heel down [Trump’s] throat and tell him he’s not answering my question. Would that make you feel good? What planet am I on?”

"Chris Matthews held Trump accountable on his position on abortion. He didn't let him up. He kept going at it and it was the most revealing thing that happened this entire campaign season, " Reiner argued.

"If Donald Trump was not a celebrity," Reiner posited, "the words that come out of his mouth, you'd see a guy, a lunatic in the park on a soapbox and you'd walk right by him."

"If he is held accountable and the press do their due diligence," Reiner argued, "he will lose. Because there is nobody in America that would agree that we should ban all Muslims from America."

In an earlier segment, Princeton professor Eddie Glaude Jr. appeared to allude to Trump's racist appeal without explicitly calling out Republican voters' racial animus, only for Scarborough to hijack his argument and insist that Trump is actually just making a simple economic argument to disillusioned working class voters. Reiner, however, did not hesitate to specifically call it out as racism.

"There are a lot of people who are racists in this country," Reiner stated matter-of-factly when co-host Willie Geist asked about Trump's appeal.

"Oh my god," an incredulous Scarborough let out. "Did you just say that?"

Watch the rest of the interview to see how the "Morning Joe" set dealt when faced with the feelings of frustrated viewers as vocalized by Rob Reiner: