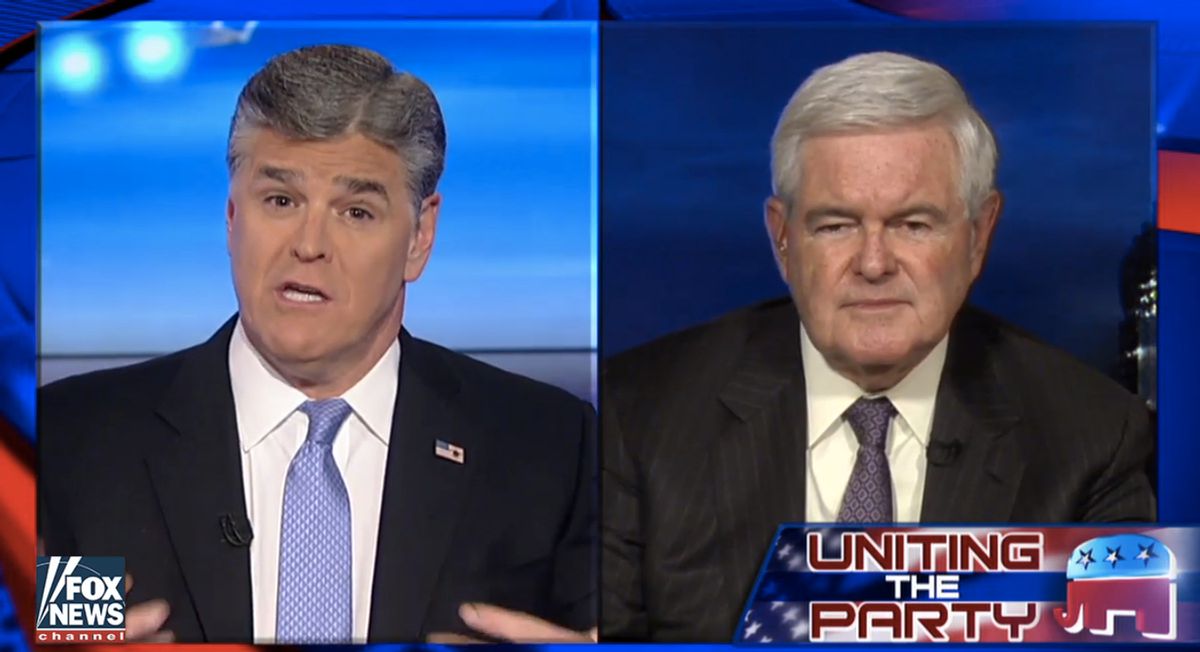 While Erick Erickson is demanding that Republicans apologize for impeaching Bill Clinton 20 years ago for lying about his philandering only to nominate a "a pathological liar and womanizer,” Fox News' Sean Hannity has vowed to lead a revolt to "stop the circular firing squad" aimed at his preferred presidential candidate, Donald Trump, accusing Republican House Speaker Paul Ryan of leading the assault against Trump.

"It seems almost coordinated. Both Bushes have declined to endorse Donald Trump, Mitt Romney saying that he will not go to the convention this year, and then we have Paul Ryan saying the following when asked if he would endorse Donald Trump," Hannity said on his Fox News show Thursday night, after the failed vice presidential nominee and current House Speaker said that he had no plans to endorse Trump following his clinching of the GOP presidential nomination.

“I’m just not ready to do that at this point. I’m not there right now,” Ryan told CNN’s Jake Tapper when asked if would endorse Trump on Thursday.

“I’m not ready to support Speaker Ryan anymore,” Hannity shot back at the outset of his show Thursday. “I’m thinking we may need a new speaker,” a snippy Hannity offered. "Thoughts?" he asked guest Newt Gingrich.

Gingrich told Hannity he thought that Ryan hesitation to embrace Trump was a “big mistake,” arguing that it sets the wrong tone for the rest of the Republican Party:

He is the Speaker of the House. He has an obligation to unify the party. He has an obligation to reach out. Obviously he and Donald Trump are going to have disagreements. Some of them will work out and some of them they won’t. That’s fine. Our constitution provides that speakers and presidents can fight, but I think he sends the wrong signal and a signal which I think endangers the House Republicans and endangers the Senate Republicans.

I think Paul Ryan has some obligation institutionally to be responsive to the fact that the people of the party he belongs to have chosen a nominee. And frankly in the long history of American politics, Donald Trump is not outrageously outside the norm. This kind of vitriol you get does not reflect accurately people who have been nominated for president over the last 200 years.

Earlier in the evening, Hannity targeted Ryan in a series of tweets, saying it was “pathetic” to not get behind the presumptive nominee.

Watch Hannity's hissy fit over Ryan not supporting Trump below: