Al-Qaeda groups like al-Nusra in Syria have exploited the rise of ISIS to grow, warns terrorism scholar Max Abrahms 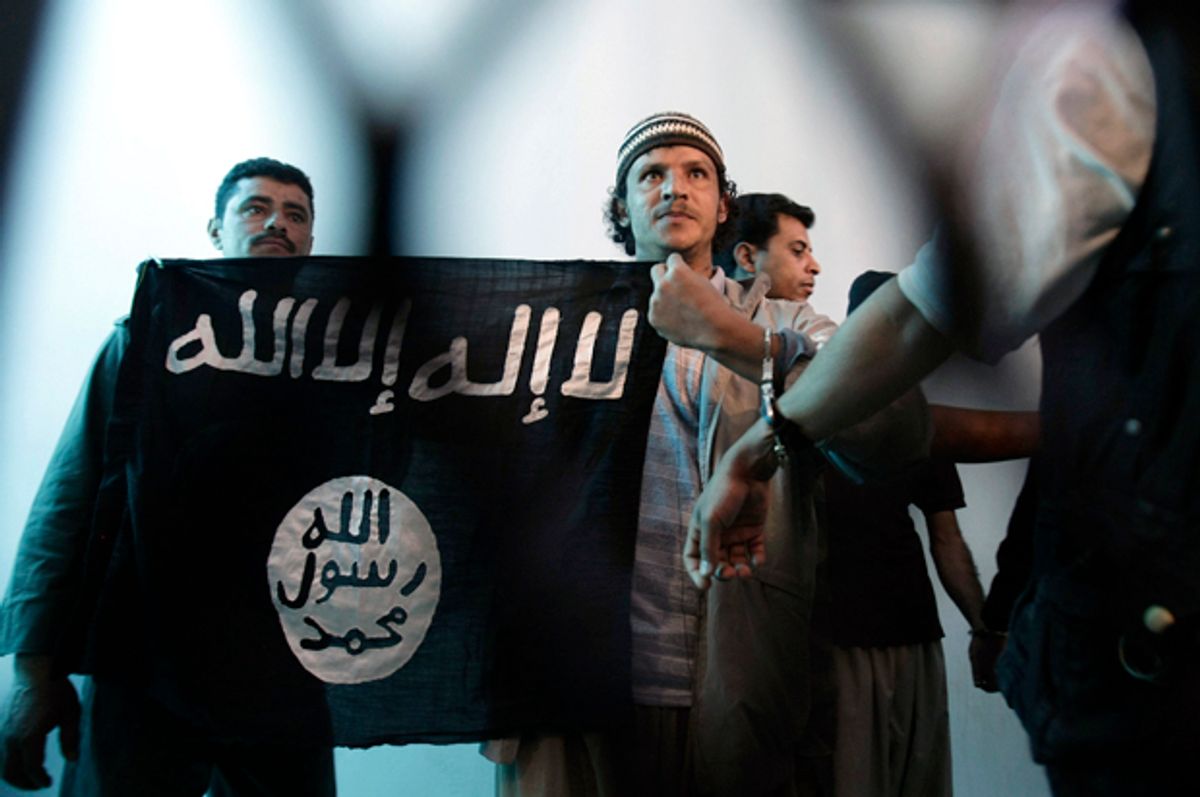 A suspected Yemeni al-Qaida militant, center, holds an Islamist banner as he stands behind bars during a court hearing in state security court in Sanaa, Yemen, April 23, 2013. (AP/Hani Mohammed)
--

Many Western media outlets "made it seem as if ISIS has a big advantage over al-Qaeda because it is even more radical; that because the group uses violence in such a brutal fashion, it will be able to out-recruit al-Qaeda, have a larger membership size, more staying power and greater capabilities."

Yet actually, in the long term, Abrahms says, al-Qaeda is the group that has benefited the most from ISIS' extremism, because it allows al-Qaeda to present itself as the more "moderate" alternative.

ISIS' brutality, and the attention much of the world has paid to the extremist group, has allowed al-Qaeda to grow with much less opposition, and even with support of U.S. allies in some areas, particularly in Syria.

Max Abrahms is an assistant professor of political science at Northeastern University who has closely studied terrorism for more than a decade.

His research challenges a lot of the contemporary literature on terrorism, which fails to account for the fact that the vast majority of terrorist attacks — six out of seven — are never claimed.

Abrahms shows through data that, the question of immorality aside, terrorist attacks have a kind of internally consistent political logic to them, although they are usually ineffective, especially when directed at civilians.

"Indiscriminate violence against civilian targets is reportedly less strategic than more selective violence against military targets," Abrahms explains in a new study. "When they attack civilians, terrorist groups have also been found to risk strengthening the resolve of the target country, lowering the odds of government concessions, eroding popular support and expediting organizational demise."

Because of this backlash, leaders of terrorist groups frequently move toward avoiding targeting civilians over time, and only taking responsibility for attacks on military targets. This is likely the reason so few terrorist attacks are claimed.

"Like all organizations, the members have different specializations within them," Abrahms told Salon in an interview.

"Those at the top of terrorist groups have a better understanding of how violence relates to politics." Civilian attacks are most often led by low-level operatives, and "oftentimes the members end up acting in a way in defiance of the leadership's preferences," he said.

"It should be pointed out that I'm not saying that all leaders of terrorist groups oppose civilian targeting," he emphasized, nevertheless. "I'm looking at terrorist groups probabilistically and trying to come up with trends."

"There are obviously cases, prominent cases, intrinsically important cases, where the leaders seem as every bit as extreme as the operatives," Abrahms said.

ISIS is one of such examples. The relatively new extremist group is very different than most terrorist organizations. Self-proclaimed "caliph" Abu Bakr al-Baghdadi has essentially given his supporters free reign to attack anyone at any time, and ISIS is more than happy to take credit for it.

"But ISIS is very anomalous in all sorts of ways," Abrahms stressed. On the other hand, al-Qaeda, the terrorist group from which ISIS split in early 2014 for not being extreme enough, is a more accurate reflection of average terrorist groups overall.

"I consider Islamic State to be a very immature organization," Abrahms explained. "I expect it to change over time in predictable ways."

Abrahms says this is one of the insights that has been gleaned from the documents seized from bin Laden's compound.

"That was ISIS-style." In the 15 years since, the terrorism expert notes that "al-Qaeda has become more moderate in its target selection."

This does not necessarily mean that al-Qaeda has become more moderate ideologically; it is still an extremist organization with a fascistic view of the world. But by focusing more on military targets, while simultaneously creating programs like welfare services, it has tried to win over local populations in various countries.

Al-Nusra, the al-Qaeda affiliate in Syria, the scholar pointed out, is the most prominent example. Many Syrian rebel groups have aligned themselves with al-Nusra, because it has primarily devoted itself to fighting military targets, namely the regime of Syrian dictator Bashar al-Assad.

With the support of U.S. allies Saudi Arabia, Turkey and Qatar, the extremist group has portrayed itself as a legitimate rebel force. Vice President Biden himself warned about this, but faced harsh backlash for his comments.

This strategy has led military officials as prominent as former CIA Director David Petraeus to pressure the U.S. to use so-called "moderate" members of Syrian al-Qaeda to fight ISIS.

At the same time, however, al-Nusra's fascistic ideology remains. It still carries out horrific sectarian attacks, putting Shia Muslims in cages as human shields and massacring Druze Syrians, which led journalists to warn "they're just as nasty as ISIS."

Al-Qaeda in the Arabian Peninsula, or AQAP, is another example. Like al-Nusra, AQAP is still a fascistic extremist group, but both militias have used these tactics to gain popular support, attacking military targets from oppressive regimes and administering social services.

"Although it may be hard to fathom now," Abrahms added, "I wouldn't be at all surprised if ISIS follows the al-Qaeda model, and at least offshoots of it come to understand that civilian targeting is counterproductive."

In the meantime, al-Qaeda in Syria and elsewhere has exploited the rise of ISIS as an opportunity to grow, establishing itself as what even neoconservatives recognize is a "much more dangerous" threat in the long term.