The government's cold-blooded anti-immigrant scam: How ICE is outsourcing detention and deportation to local police 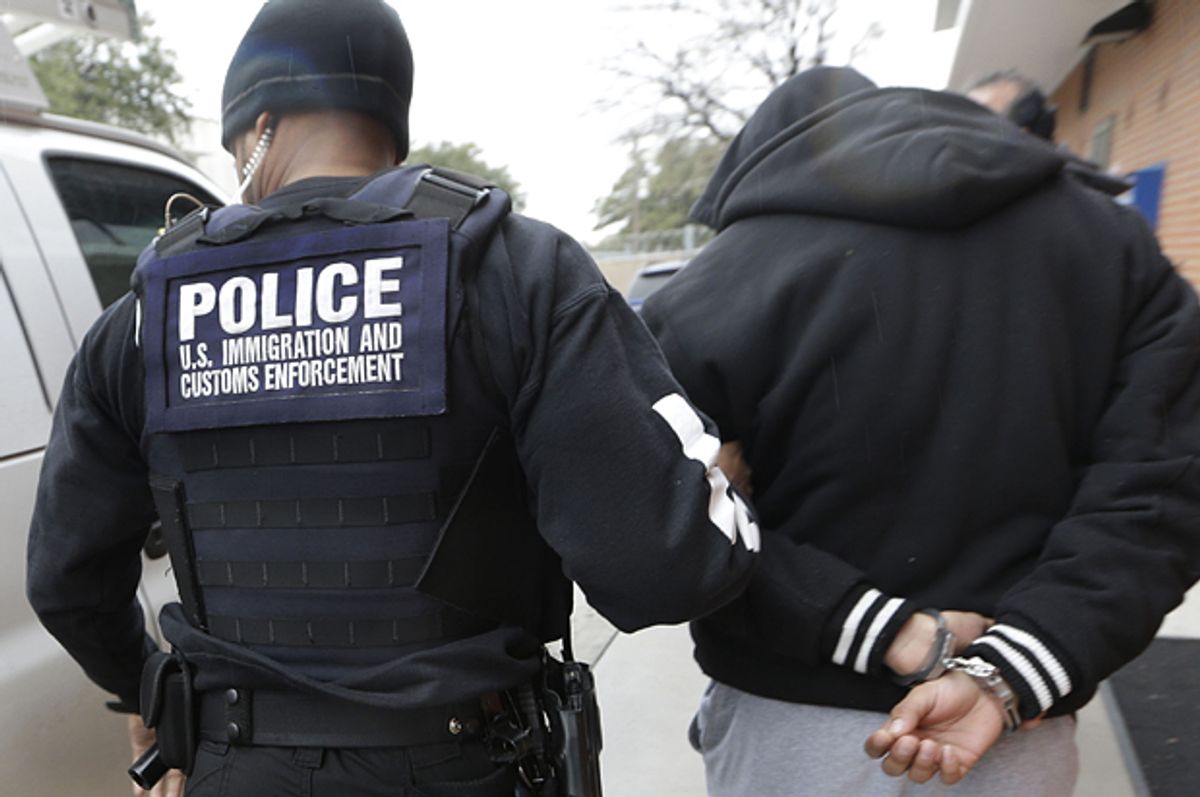 Harris County, Texas, spends about $1 million each year of its taxpayers' money to do a job that should be done by the federal government: immigration enforcement.

Immigration enforcement is a job for the U.S. government, but in Harris County (and 31 other counties across the country), the local police departments have entered into a contract with Immigration Customs Enforcement (ICE) to do the work of detaining and deporting immigrants.

The collaboration between the Houston Police Department, located in Harris County, and ICE is possible due to a federal regulation known as 287(g), which allows state officers and employees to serve as immigration officers. Thus, ICE can enter into agreements with state and local law enforcement agencies, and local law enforcement can serve as agents of the U.S. government.

Harris County is one of the most deeply entrenched localities entered into this agreement. It deports close to 300 people every month, more than Arizona’s notoriously anti-immigrant police department in Maricopa County, led by Sheriff Joe Arpaio.

Eddy Arias is a teacher in the Houston Independent School District and an undocumented immigrant. He spent 45 days in Harris County jail for driving through a yellow light. In an op-ed for the Houston Chronicle, Arias describes what happened:

“The officer asked me if I was from the United States and I honestly replied, 'No.' The officer then laughed and said, 'I knew it.'”

Arias disclosed to county officials that he is gay, and consequently was held in solitary confinement. Due to his immigration status, he was further detained at a Texas ICE detention center, and only released when authorities cleared him of any wrongdoing. The tab for his stay in jail covered by Texas taxpayers.

Let’s take a step back to see how we got here. To do that we have to track back to the origins of the the federal immigration laws, passed in the mid-'90s, that created the possibility for 287(g) in the first place.

The 1994 midterm elections were a pivot point for the Democratic Party and an anchoring moment for the Clinton Administration. Republicans took control of Congress for the first time in a generation, and the Clinton White House was determined to change the story for the upcoming 1996 Presidential election. The strategy: double-down on the Administration’s “tough on crime” image.

The policies that came out of that period, including the 1994 crime bill and the deployment of an additional 100,000 police officers nationwide, have ensured that an anchor of the Clinton legacy will forever be the same laws  that led to America’s position as global leader in mass incarceration.

A lesser discussed legacy of that era is the bill that President Clinton signed in 1996, just months before the presidential election, the Illegal Immigration Reform and Immigrant Responsibility Act. The bill was part of the Clinton administration’s “tough on crime” strategy, and included many provisions that focused on one thing: increasing the penalties on immigrants who had broken the law. The bill included harsher penalties for documented immigrants who had committed crimes, and increased the scope of law enforcement to penalize undocumented immigrants.

The law made the path to legalization significantly more difficult. It encouraged deportation -- making more people eligible for it, and making it easier for authorities to deport immigrants. It eviscerated due process rights for immigrants. And it that allowed for the collaboration between federal immigration officials and local police.

Earlier that year, in April of 1996, President Clinton signed the Antiterrorism and Effective Death Penalty Act, which expanded the grounds for detaining and deporting immigrants, including long-term legal residents. This law was passed in the wake of the Oklahoma City bombing, and was the first law to fast-track deportation procedures.

Frances Valdez, a Houston immigration attorney, expresses exasperation at just how costly 287(g) is, both to the immigrant community and to taxpayers. When asked what might be in it for Harris County to continue the collaboration, she told Salon, “Nothing! Our county spends more than $1 million to provide space and personnel to ICE each year.” County officials are trained to work as ICE agents -- they even wear ICE uniforms -- but it’s the local community that pays the price, both literally and in terms of deported and detained community members. “It’s a drain to our budget,” Valdez says, “and it’s really damaged the relationships between immigrant community and law enforcement. For what? Conservative officials get to say that they are tough on immigrants.”

Last week, on the 20th anniversary of the passage of the Illegal Immigration Reform and Immigrant Responsibility Act, Rep. Raul Grijalva, alongside the Congressional Progressive Caucus, the Congressional Asian Pacific American Caucus, over 30 members of Congress and 84 advocacy groups, got together to call for a Congressional resolution to reform the 1996 immigration law, calling on their leaders to “#Fix96.” Human Rights Watch marked the anniversary by releasing a report, documenting the 20 years of human rights violations made possible by IIRIRA and ADEPA.

In Houston, activists are making the connection. The Houston Beyond ICE Coalition is working to get rid of 287(g) and includes immigrants rights groups as well as Black Lives Matter - Houston,  Fight for 15, and Justice For Janitors, among many others. Citlali Álvarez, Houston organizing fellow for United We Dream told Salon about their strategy to build a broad base of support among diverse communities in Houston who are disproportionately targeted by the police.

“Our collaborations and our approach intentionally bring together these too often separate conversations to build collective power between brown and Black communities in Houston. In other words, to say, we know these systems of oppression are linked and we're going to stand together,” Álvarez says.

The Immigrant Legal Resource Center's Angie Junck reminds us that Houston’s participation in 287(g) is completely voluntary. “Many other localities (more than 350 jurisdictions across the country) have opted to end their relationships with the program” Junck says, with Los Angeles as the most recent, “citing erosion of community trust, amongst other challenges.”

The “tough on immigrants” stance parroted by many local police departments, including Houston’s Sheriff Ron Hickman, harkens back to 1996 almost directly, when Rahm Emmanuel, then a senior advisor to President Bill Clinton, wrote a memo saying the with the passage of the immigration bill the Clinton Administration could "claim and achieve record deportations of criminal aliens.” As reported in Vox, this legislation is a cornerstone of the Clinton legacy, but rarely discussed as such, and the questions remain: If Hillary Clinton wins the White House, what will her goals for immigration reform be? Will they be to continue in the punitive and destructive legacy of her husband’s 1996 immigration law?

In Houston, the 287(g) contract is up, and it’ll be up to Harris County to decide whether to continue or end its partnership with ICE. Last Tuesday, the County Commissoner’s office held a meeting to hear comments from the community. County Judge Ed Emmett remarked at the number of Houstonians who showed up, saying that they’d never before seen so many speakers attend an open public comment session on one topic. Nevertheless, they refused to put 287(g) on the general agenda.