Trump surrogate Jan Brewer sneers at "this woman thing," while Trump paints Clinton as a nagging shrew of a wife 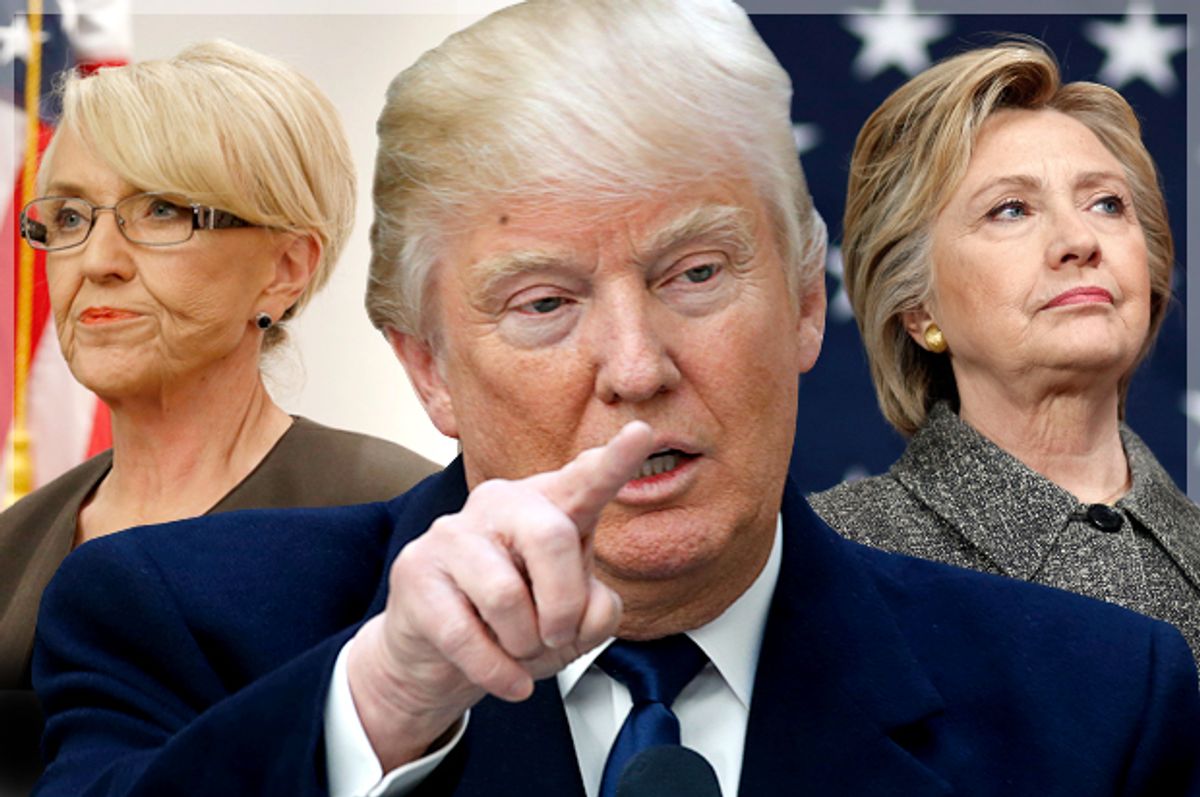 Is Donald Trump trying to get the lowest share of the women's vote since the 19th Amendment? The past week's attempts to pivot to the general election have largely been a failure, but especially when it comes to any attempts to woo female voters. If anything, it seems like Trump and his supporters are engaged in a crazy experiment to see if you can still win an election while losing as many female votes as you can. (Hint: You can't.)

One of the biggest howlers of the weekend didn't even come from Trump himself, but from one of his most prominent surrogates, Gov. Jan Brewer of Arizona. Brewer was asked Sunday on CNN if she would be interested in serving as Trump's running mate, and after indicating interest, she and Jake Tapper had a baffling exchange where Brewer, a bona fide female human being, argued that there are too many women in politics.

“Do you think he needs to pick a woman?” Jake Tapper asked her. “Given how bad his numbers are with women.”

“I don’t necessarily think you need to pick a woman,” Brewer replied. “You know, this woman thing has gotten way out of control I believe."

"This woman thing has gotten way out of control": A better slogan for the Trump campaign than the vague and plagiaristic "Make America Great Again."

"And I think it’s been driven by the left,” Brewer continued. “Because they think that it’s going to bring them over the end. But I think people, when they sit down to vote, they vote for the very best candidate. They want somebody that’s going to represent them.”

This was a clear attempt to soften up her stance, but no one should be fooled. The implication here is that women who are running are not the best candidates, but are charity cases being run in order to bamboozle guilt-laden liberals into voting for them. (Presumably, Brewer sees herself as the exception to the women-generally-suck rule she's invoking here.)

Brewer's comments echo the larger Trump campaign's approach so far to Hillary Clinton, which is to imply that because she's female, you can assume she's unqualified and only getting jobs by playing the "woman card." Most women hear that kind of rhetoric and realize immediately that the implication is that they are also inferior and incompetent and only hold jobs in order to fill some lady quota.

Which is why, no doubt, a recent CNN poll shows Clinton leading Trump by a whopping 26 points, which is double the margin that Barack Obama had over Mitt Romney in 2012.

Instead of trying to close this gap, Trump has decided to double down on spewing misogynist stereotypes, for instance, suggesting that Clinton is a nagging wife.

Here is Trump turning a critique of Clinton's foreign policy positions into a crack about the Clinton marriage. pic.twitter.com/UPMpLtxZMN

And, in one of the more baffling choices, it seems that Trump is really digging into the notion that male infidelity is not the fault of the cheating husbands, but of shrewish wives.

"Hillary was an enabler and she treated these women horribly. Just remember this," Trump said during a campaign event on Saturday. "And some of those women were destroyed, not by (Bill Clinton), but by the way Hillary Clinton treated them after it went down."

This is a common theme he returns to when discussing Bill Clinton's adulterous past: That Bill Clinton was a noble man who did nothing wrong, but that his evil harpy of a wife is the bad guy.

It's a position Trump's held a long time, telling Wolf Blitzer that Bill Clinton's adultery was "totally unimportant". Except, of course, when it comes to how Hillary Clinton acted. Any hurt or anger she expressed about being cheated on is treated, by Trump, as the worst possible thing a woman could do ever.

It's important to remember the context of this, as well, namely that Trump himself is a famous adulterer.  He almost certainly has ulterior motives for his apparent belief that a woman who is being cheated on should suffer in silence.

Add that to Trump's current situation, being married to a much-younger woman who was a fashion model when he met her and who has a habit of bragging about how she's not "needy" or "nagging". Melania Trump, as a bonus, also likes to brag that she does all the domestic work, without expecting him to dirty his hands with such lowly women's tasks, like child-rearing.

Howard Stern "once asked Trump what he would do if Melania were in a terrible car accident" that mutilated her body, Julia Ioffe of GQ explained in a recent profile of Melania Trump. "Would Donald stay with her?"

Trump replied by asking, “How do the breasts look?”

Only after ascertaining that the breasts survived, Trump said he would stick by her, arguing, "Because that’s important."

This is the 21st century. Even many conservative women get offended at the idea that women exist solely to be silent servants to men, with no ambitions or feelings of our own. Trump wants to run these misogynist scripts — painting Clinton as a shrew for not wanting her husband to cheat and as an impostor for having ambition — without insulting women as a group. But that's basically impossible to do. There's no way, for instance, to castigate Clinton's anger at being cheated on without suggesting any woman who feels anger in that situation is failing as a woman.

In one way, therefore, Brewer was right. Trump doesn't need to a pick a female running mate. But not because there are too many women in politics right now, but because it probably wouldn't work anyway. There's just no way to overcome this relentless stream of sexist abuse aimed not just at Clinton, but every woman who dares have an opinion, an ambition, or a feeling that Trump considers inconvenient to men.