Meghan Trainor fights back against toxic body standards: "They photoshopped the crap out of me and I'm so sick of it" 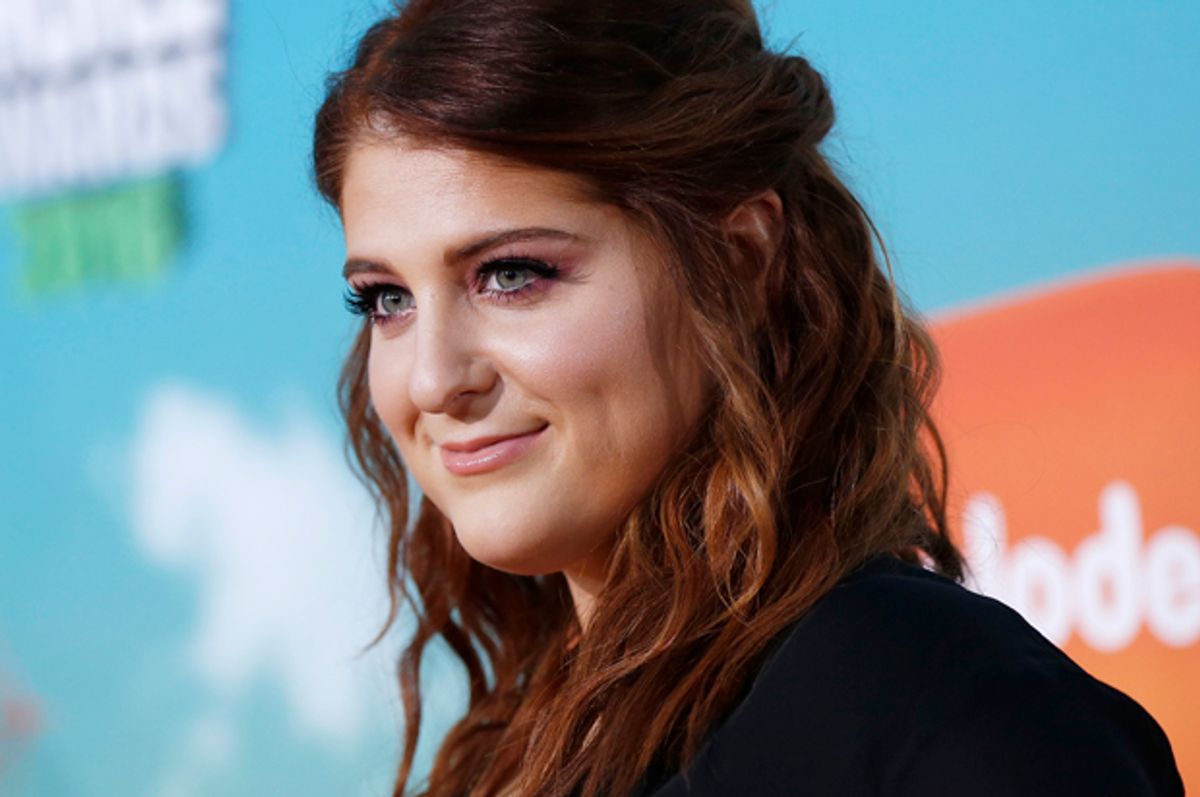 The work of bringing booty back never ends, and it doesn't just stop with booty, either. If anyone should know that, it's Meghan Trainor. Keep fighting the good fight, lady.

The 22 year-old Grammy winner first rose to fame two years ago with her omnipresent, song of the summer anthem to curves, "All About That Bass." So when a woman who gave us the lyrics, "I ain't no size 2" released the video for "Me Too," the new single from her forthcoming album "Thank You," do you think it's a lock that her creative team went about making a clip that accurately reflected her body? In the words of Trainor herself, nah to the ah to the no, no, no.

Just one day ago, Trainor was posting images from the video on Instagram, showcasing stills of her rocking a giraffe onesie and dancing in a form-fitting, royal blue ensemble. But as Trainor told USA Today Tuesday, soon after the video debuted Monday morning, fans began publicly commenting that her body looked like it had been digitally altered to appear slimmer. As one person on Twitter observed, "The people who edited the Me Too video photoshopped @Meghan_Trainor. That's so stupid. I hate body standards. It will still look good!"

Trainor said, "I saw fans posting it and was like, 'Why are fans ruining my waist? Are you kidding?' Then I went to the video and was like, 'Oh my god.' I texted the editors like, 'I never asked you to touch my waist. I want my waist back.'"

In the video for her last single, March's "No," she looks like herself — a grown lady, one who has boobs and a butt — and a waist that is entirely in proportion to those first two. I would like to further enter into evidence the video for last fall's "Better When I'm Dancing." Look at her in the red dress — that's what she looks like. Yet with innovative technology making it increasingly simple to digitally alter performers to look younger, taller and narrower, radical shape shifting is becoming the new normal. So maybe someone in editing got a little overexcited?

On Snapchat Monday, Trainor released a message saying clearly, "I took down the 'Me Too' video because they photoshopped the crap out of me and I'm so sick of it and I'm over it. So I took it down until they fix it. My waist is not that teeny. I had a bomb waist that night; I don't know why they didn't like my waist. But I didn't approve that video, and it went out to the world, so I'm embarrassed…. And I am sorry about this."

The video has indeed since been pulled, and Trainor says another will be released soon.

Trainor told USA Today that when she saw the clip, "I screamed in my hotel room. I was like, ‘Why would they do this?’ I cried." She adds that "I wrote a song called 'Curves' that didn’t make the album because it’s so doo-woppy, but I want to save it for some big campaign. It’s too good to not be heard." No doubt she'll make sure that when it does, her video team is the first one listening.