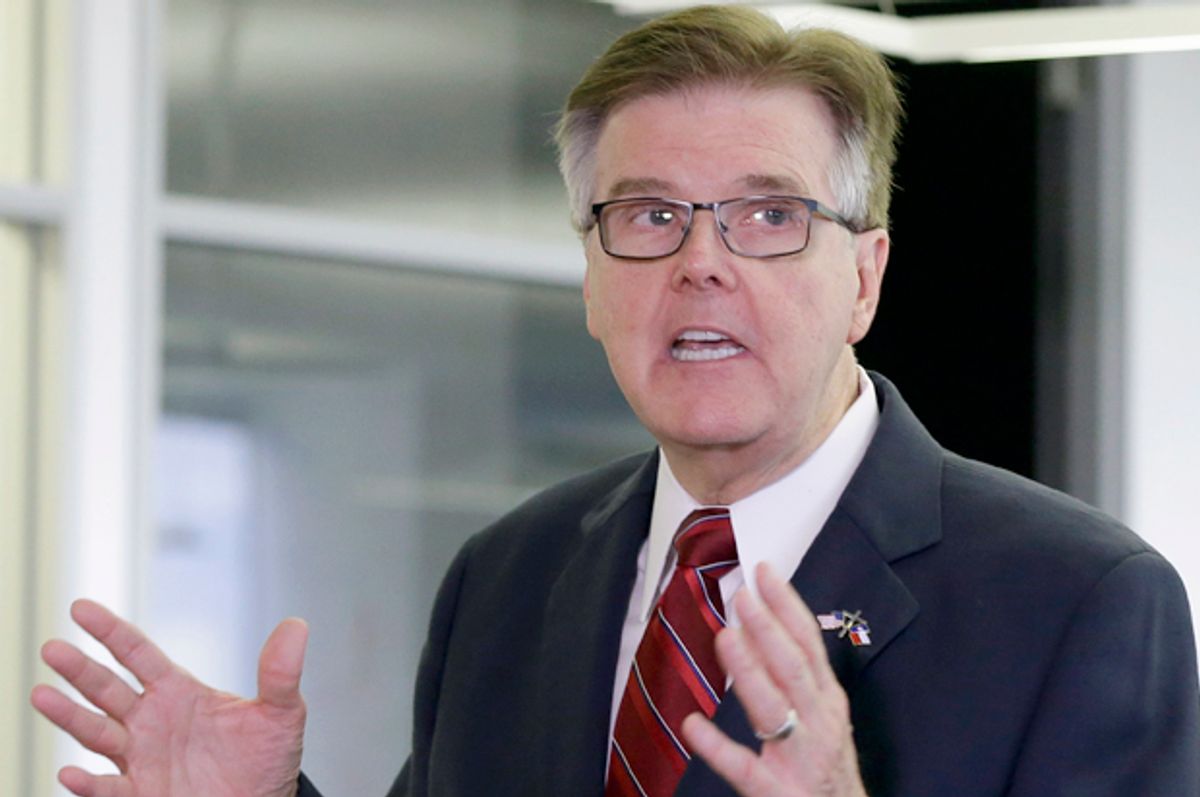 Yes, bigots, we get it — the world is changing and that terrifies you. But kind of special throne in hell are you vying for that you could be so callous, so threatened, by kids and the people trying to protect them? I'm asking, Texas Lt. Governor Dan Patrick.

As America continues its embarrassing freakout over the rights of trans people to use public restrooms in peace, down in the Lone Star State, Dan Patrick has come out swinging this week. On Monday, Patrick issued a statement calling for the resignation of Fort Worth Independent School District Superintendent Dr. Kent Paredes Scribner, for adopting a tolerant, common sense set of "Transgender Student Guidelines."

Scribner has come under fire ever since announcing the policy at a board April 19 meeting. As the Star Tribune reports, "There was no discussion at the meeting and it was not included as an action item on the board’s agenda" — and this raised some people's hackles. Trustee Judy Needham told the paper that "The community should have gotten the opportunity to speak." Because believe it or not, there really are those who believe that a policy with a directive to district personnel to "show respect for the student’s desires and wishes to the extent practical so as to foster a productive educational process for all," one that wants students and administrators to have a "more respectful and trusting relationship," should be up for any discussion beyond, "Yup."

On Monday, the "Texas Values" site, clearly not comprehending how gender actually works, announced that "Fort Worth ISD Allows Boys in Girls Bathrooms," stating that "These new guidelines would threaten the safety and privacy of children in all Fort Worth schools by opening little girl’s bathrooms and locker rooms to boys." It added, "No medical or mental health diagnosis is required in order to have a student claim an identity and therefore, have full rights to the opposite sex locker rooms, bathrooms, etc."

Hot take: People who don't understand the difference between the words "transgender" and "opposite sex" are literally arguing about issues that don't exist. It's precisely the kind of dumbass vitriol spewed by people like bafflingly still famous "Duck Dynasty" patriarch Phil Robertson, who this week proclaimed, "Men should use the men’s bathroom and women should use the women’s bathroom. Just because a man may 'feel' like a woman doesn’t mean he should be able to share a bathroom with my daughter, or yours. That used to be called common sense. Now it’s called bigoted."

You can read the whole new Fort Worth schools policy document online; it's full of crazy ideas like "support" and "inclusiveness." School board president Jacinto Ramos, Jr. said this week that "We are focused on creating a strong, safe, and productive learning environment for ALL students."

And this radical indoctrination talk is what has led to Patrick's demand for Scribner's removal. In his statement, Patrick affirmed, "Campus safety should be of paramount concern for anyone in his position. Every parent, especially those of young girls, should be outraged." Guys, can you please stop hiding behind girls as an excuse to flaunt your transparent ignorance? It's embarrassing.
But since apparently you still don't get it, let's go over this again — giving trans men and women, boys and girls safe places to pee and wash their hands has zip to do with men who want to hurt girls. It's about giving kids like 16 year-old Jessica, a transgender Fort Worth high schooler, an alternative to her current system of waiting out the school day so she can go the bathroom at home.  Scribner, meanwhile,  says he won't step down, saying this week, "Children shouldn’t have to wait for their schools to feel safe and full of respect."

And as a mother of two daughters, let me try to add something else. My kids go to a public school full of straight, gay, bisexual, questioning and trans students. Their transgender classmates are not predators. They're peers. They're friends. The trans girl my daughter's been friends with since sixth grade is not a threat to her or to anyone else. She's just a person who sits with her in class and on school trips. Only someone with the noxious combination of malice and stupidity would advocate against her right to be treated like any other kid, down to her right to be as much herself in the bathroom as she is in the classroom. But if you think mothers should be outraged, Dan Patrick, don't worry, because I am furious. Just not at my children's awesome, strong, funny, smart, beautiful friends. No, I'm outraged at the idiots who'd stand in their way.