Americans need to pay attention to the U.K.: The relationship between the next prez and future prime minister is critical

Cameron's successor will have a massive impact on U.S. — but how will he or she get along with Clinton or Trump? 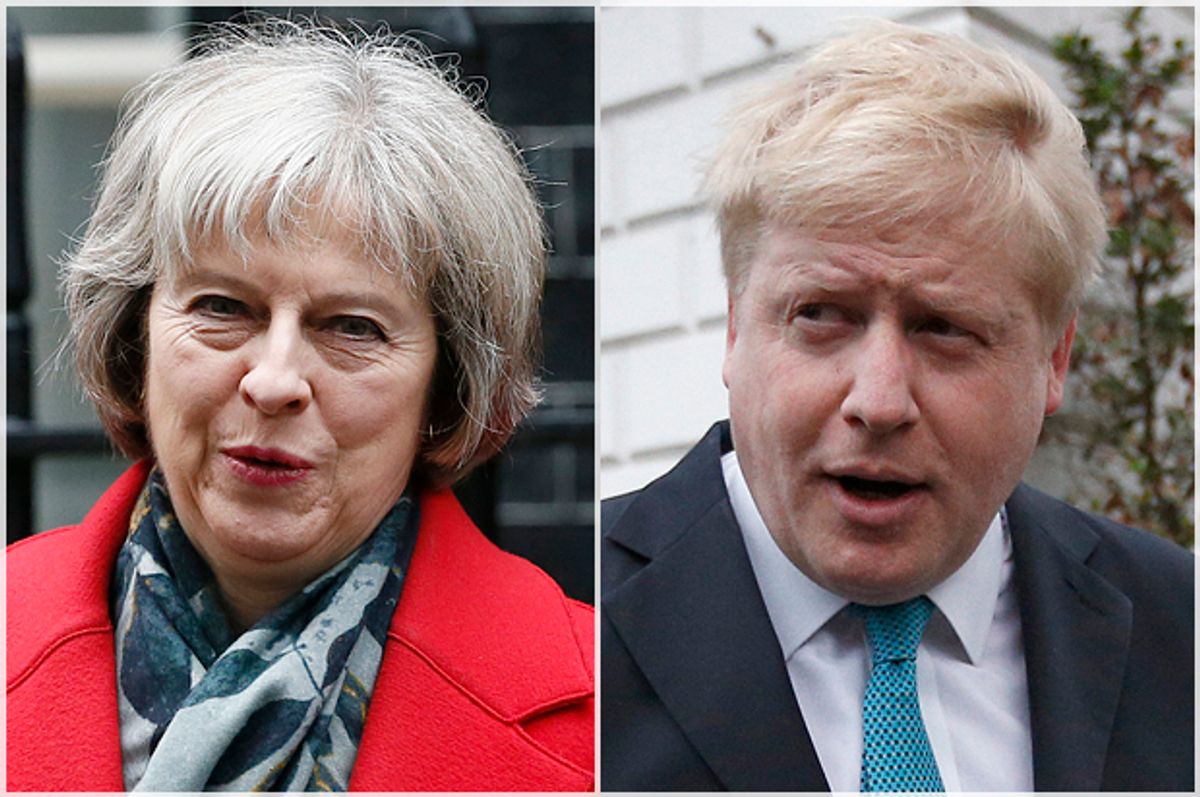 Here’s a quick breakdown of the current state of U.K. politics. In the U.K. as in the U.S., until there are significant changes, only one of two parties is realistically going to be elected to govern. Unlike in the U.S., however, smaller opposition parties in the U.K. can receive so substantial an amount of the vote that it may knock one of the two ‘main parties’ out of the running. And right now, the Labour party is the one taking the biggest hit. In 2015, with the Scottish National Party, UK Independence Party and the Green party increasingly taking many left and working-class votes that might once have gone to Labour, the Conservative party returned to power with its first majority in almost two decades.

Now, it’s been said, David Cameron’s government is using its powers to try and render the Labour party “completely dead” as a viable opposition, namely by wiping millions of (largely Labour) voters off the electoral register, redrawing the voting map and attempting to cut off funding to the party. Add in the most biased and right-wing media in Europe and a new Labour leader that’s wildly unpopular nationally, and you’re looking at the likelihood of the British electorate keeping it a Conservative PM until at least 2025. This is important to understand, because it means that whoever succeeds David Cameron could help shape both Britain and US-UK relations for potentially the next decade or more.

For six years, the ties shared by David Cameron and Barack Obama have been – if you’re to believe the official line – strong. It was said earlier this year that the PM “has been as close a partner” as Obama has had during his presidency, indicating that the “special relationship,” first enjoyed by Winston Churchill and Harry Truman some seven decades ago, remains intact. By the end of 2016, however, the dynamic will have changed. There will be a new president, and depending on the outcome of the EU referendum and rising divisions within the Conservative party, there might be a new Prime Minister as well.

It’s deemed likely at this point that Hillary Clinton will be the next POTUS, but there are currently two main contenders to take over from Cameron as PM, and their success could depend entirely on whether Britain votes to Leave or Remain in the European Union on June 23. (Currently, according to the most recent poll, voters are split literally 50/50.) Heading up the Remain camp is Cameron favourite George Osborne, the Chancellor who vowed to erase the national debt but, in administering austerity measures and making sweetheart deals with corporations, has actually doubled it to £1.56 trillion and driven up poverty and homelessness in the process. Campaigning to Leave is Boris Johnson, the former mayor of London who once conspired to have a journalist beaten up and thinks nothing of calling black people “picaninnies” with “watermelon smiles.”

One of these, ladies and gentlemen, will likely be the next Prime Minister of the U.K. If it’s the Clinton-backing Osborne, an influence on and close ally of Cameron, working with Clinton, who apparently wishes to continue in the vein of Obama, the special relationship may remain largely unchanged. If it’s Johnson, however, that probably means the U.K. voted to leave the European Union, and the special relationship would be set to take a hit (potentially further exacerbated by the fact that Johnson has been highly critical of Clinton in the past, referring to her as a “sadistic nurse” representing “everything I came into politics to oppose”). John Major, the Tory PM prior to Cameron, has said that US-UK relations would “wither” if the British people vote Leave, while Obama has said the UK would no longer receive preferential treatment and would find itself at the “back of the queue” on trade.

Even if the U.K. votes ‘In’ on June 23, and it’s Prime Minister Osborne or another Cameronite who ends up leading the U.K. , the special relationship might be in trouble. There will still be necessary common ground between the U.S. and U.K. , in terms of intelligence sharing and more. But while the Obama administration, which Hillary Clinton has effectively promised to extend, has been courteous on the surface for the past six years, in reality Obama has been distancing himself from David Cameron and the Tory government for some time. The president has criticized Cameron and his team on defence spending and their handling of the Libya situation, while declaring that America’s strongest ally is, in fact, France, not Britain. Privately, the White House now “snickers” about the concept of the special relationship.

According to Washington, the special relationship as enjoyed by Margaret Thatcher and Ronald Reagan, by Blair and Bush, is already in decline. A recent Congress memo suggested that organisations such as the G20 group have diminished the relationship’s “influence and centrality.” A vote for Brexit would undermine it further. Clinton also has her own reasons to remain cool on the current U.K. government: Back in 2010, Clinton was warned by an aide to be wary of the Conservatives, with special mention given to “Tory clown prince” Boris Johnson. Clinton’s emails also revealed that she retains close ties not with the Tories, but with the Blairite wing of the now struggling Labour party.

Ironically, the U.K.’s next PM might have a better relationship with the next POTUS if the Brexit-backing Donald Trump is the one in charge in 2017. Though it seems unlikely, Donald Trump having a clear path onto the ballot in November means there is now at least a chance he could be the 45th President. And though the challengers to Cameron's throne have all slammed Trump in their own way – Osborne called him a peddler of “nonsense”; Johnson declared him “unfit” to be president – it's difficult to imagine they would have a hard time working with him. Already the UK government is backpeddling on previous comments by declaring that Donald Trump “deserves respect,” and Trump, as a conservative, might make more of a natural ally to the Tory leadership than the more liberal Clinton would.

Johnson most obviously would make a good fit with the Donald. Where Osborne is hell-bent on forming close ties with Trump’s buzz-enemy China (something that has apparently already caused a rift between Cameron and the Obama administration), Johnson has been described as Britain's Trump, a wealthy eccentric with signature whacky hairdo that, like Trump, thinks nothing of publicly making vulgar or racially insensitive remarks. He may have opposed Trump's recent disparaging comments on the British Muslim community, but Boris like Trump has stoked the fire of anti-immigration sentiment himself. He also, like Trump, has shown a leniency towards Vladimir Putin that most Western leaders don’t seek to emulate, while often idolizing his own nation’s tricky past. It's not hard to imagine these two would get along, both professionally and personally.

Which way would Trump and Johnson lead us? Ironically, these two isolationists could bring the U.S. and U.K. closer together again, with both nations left looking for similar-minded friends as they close doors with other former allies. This is all speculative of course. By some miracle the Labour party could resurrect itself and install Jeremy Corbyn as the PM in 2020. Perhaps both Osborne and Johnson will be outflanked by Theresa May, the ambitious current Home Secretary who wants to push through the most invasive surveillance laws in the western world (so says Snowden) and, in her quest to outlaw every ‘high’ – legal or otherwise – going, might have legally banned tea. May together with Hillary Clinton would be a landmark: the most significant leadership pairing in the Western world, 100% female for the first time in history. Such a pairing might be little more than symbolic, but increasingly it seems the “special relationship” doesn’t qualify as much else.