The Benghazi farce deepens: The GOP's conspiracy hunt is undermined from within 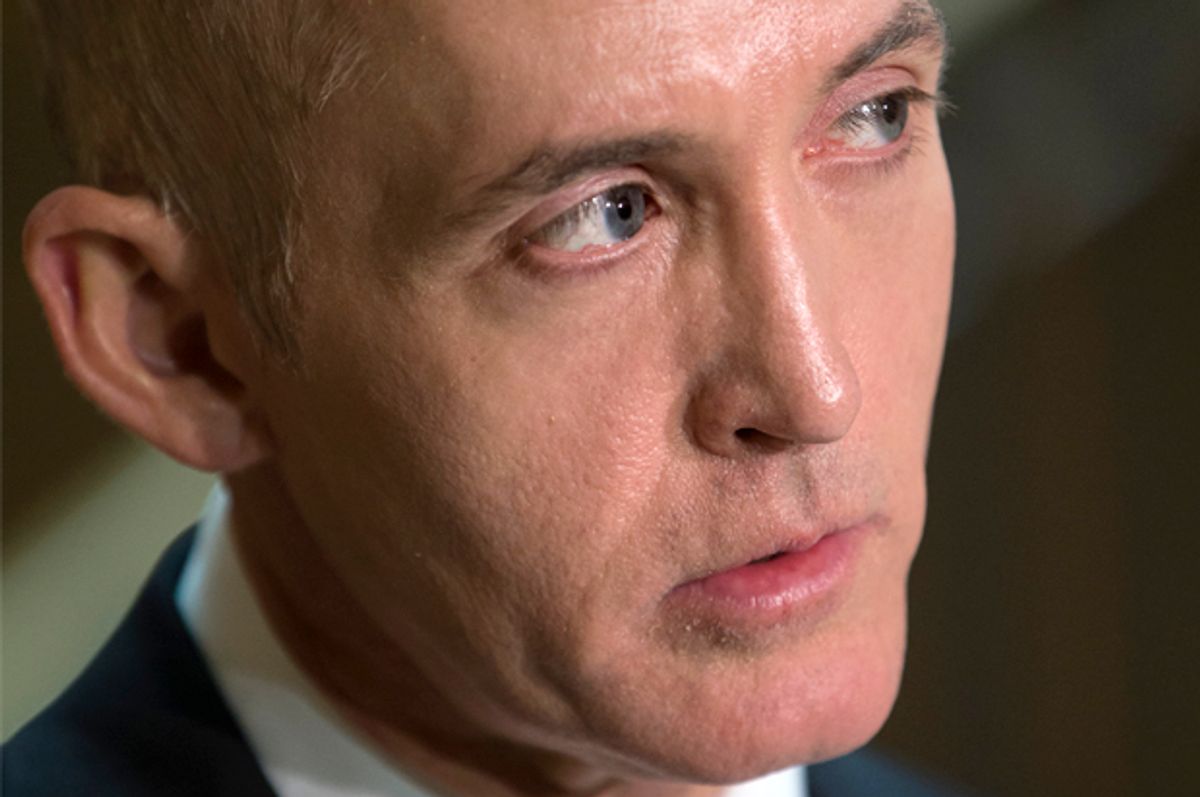 The allegedly impending release of the House Select Committee on Benghazi’s final report – two-plus years in the making – is generating some renewed attention for some of the well-worn and many-times-debunked conspiratorial allegations surrounding the 2012 terrorist attack. If for some reason you’ve forgotten, the primary thrust of much of the conservative Benghazi freak-out deals with the idea that the Obama administration made a deliberate decision to withhold military assets that might have otherwise rushed to rescue the Americans under attack in Libya. The darkest, least logical, and thus most popular interpretation for why the administration allegedly did this is that the White House somehow wanted to make the deadly attacks a non-story, and scrambling a military response would have clued people into the fact that something bad had happened.

This is the avenue of inquiry that Benghazi committee chairman Trey Gowdy and his Republican colleagues are focusing on as their investigation winds down, even though multiple inquiries (including the Republican-led House Armed Services Committee’s investigation) have found there was nothing that could have been done militarily to alter the outcome of the attacks. According to the Pentagon, Gowdy’s committee has been inundating the defense agency with interview and document requests that are either duplicative or of seemingly little importance. The committee Republicans have asked the Defense Department to track down pilots who allegedly could have been deployed, an anonymous Facebook poster claiming to be a mechanic at a European air base, and drone operators who were active in the area during the attacks. Gowdy himself is issuing defensive statements to the press justifying these lines of inquiry, “I appreciate fact that they made generals available to me. They have a perspective,” Gowdy said of the Defense Department. “But so do people who were on the ground receiving orders.”

The obvious concern that arises from all this is that the committee Republicans are fishing for a narrative to align with the conspiracy theory conservatives have already decided is true. That’s clearly what committee Democrats are thinking, which is why they released a letter this morning undermining their Republican colleagues’ investigation into the military response.

Per the Democratic letter, retired Lt. Gen. Dana Chipman, who was until recently the Chief Counsel for the Benghazi committee Republicans, “repeatedly commended the military’s actions on the night of the attacks during closed interviews with Defense Department officials.” The quotes they dug up from transcripts of interviews are presented without context, so take that as a caveat. But some of them do seem like fairly unequivocal assessments from one of top Republican staffers on the committee that nothing more could have been done militarily to alter the outcome of the Benghazi attacks.

For example, the committee Democrats quote Chipman from a January 2016 interview saying “I would posit from my perspective, having looked at all the materials over the last 18 months, we could not have affected the response to what occurred by 5:15 in the morning on the 12th of September in Benghazi Libya.” While interviewing former Defense Secretary Leon Panetta, Chipman said, according to the committee Democrats: “I think you ordered exactly the right forces to move out and to head toward a position where they could reinforce what was occurring in Benghazi or in Tripoli or elsewhere in the region. And, sir, I don’t disagree with the actions you took, the recommendations you made, and the decisions you directed.”

That seems significant! Chipman, according to a recent profile in Stanford’s alumni magazine, is a no-nonsense kind of guy who doesn’t exhibit any sort of overt partisan leanings. “The idea of a conspiracy isn't one I'd default toward for anything,” he told the magazine regarding his work on the Benghazi committee. “If there are claims that a conspiracy was done, I want to be sure we've fully addressed them and run them to the ground as best we can.” The quotes provided by the committee Democrats make it seem like he was pretty satisfied that there was no conspiracy or malfeasance afoot regarding the military response. Gowdy and his Republican colleagues, however, remain stubbornly unconvinced, and they’re diving down every rabbit hole they can turn up to find something politically useful.