The "Madman Theory" of Donald Trump: What's the GOP supposed to do about a lying, authoritarian demagogue?

Nixon used to say he wanted his enemies to think him a "madman." For Trump, the problem is everyone thinks he's mad 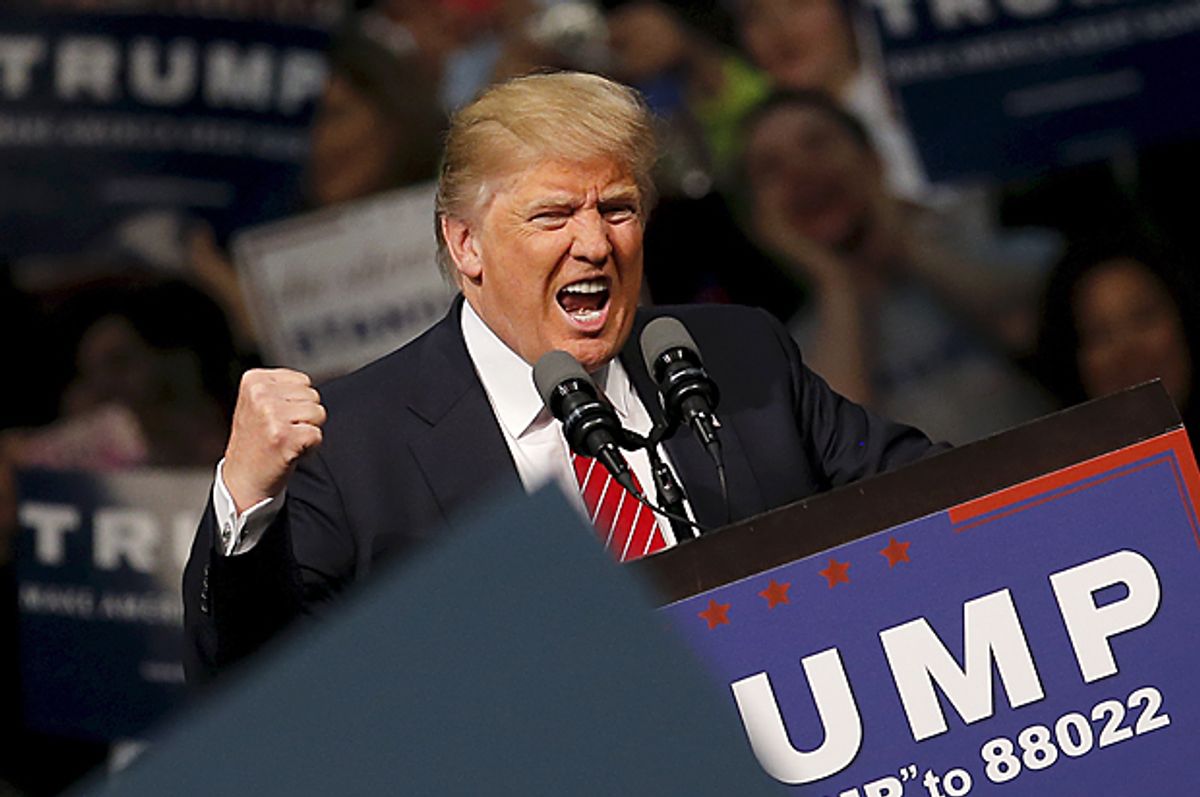 Back in the day, liberals used to always wonder why Warren Beatty didn't run for president. Nowadays, you'll hear the same thing about George Clooney. After all, these are people with 100 percent name recognition, fabulous good looks, brains, charisma, money and political contacts. They have an obvious knowledge and interest in government and achieved the very highest pinnacle of success as actors, directors and producers.

The reason they won't do it is simple. As world-class movie stars, they understand fame in a way that a mediocre tabloid star cannot and they know that the glare of the press is unrelenting and brutal when you reach a certain level. They opted to pursue politics as private citizens because they were smart enough to know that every detail of their lives would be seen through a different prism if they ran for office and that many things people accept in a celebrity will look different in a politician. (Just ask Arnold Schwarzenneger who would probably be a U.S. senator right now if not for his sex scandals catching up to him.)

Over the weekend we had a storm of Trump tabloid news -- from the fallout over the revelation that he had been a sock-puppet public relations man back in the '90s who pimped his own sexual exploits to reporters and tabloids under the pseudonym "John Miller"; to his white supremacist butler; to a front page story in the New York Times about his years of sexually harassing women; to using the same pseudonyms to cheat illegal immigrants out of their wages. This was on top of his continued refusal to show his tax returns amidst rumors that it's because his fortune is vastly over stated.

It was quite a run of personal news about the The Donald, and he seemed uncharacteristically off-balance. He snapped at George Stephanopoulos for pressing him about his taxes. He blatantly lied when confronted with a recording of himself pretending to be his own PR person, even though he'd previously admitted doing it. He hung up on reporters when they brought it up later. He wasn't even his usual swashbuckling self on Twitter over the weekend, merely taking a few flaccid swipes at the New York Times and retweeting a couple of women who say they like him. As he himself would put it, he "had a tough weekend."

There has been some talk that this sock-puppet charge could be one that sticks to him more than others, because it denotes someone who is mentally unstable. Personally, I think it's been fairly obvious from the beginning that the man has some serious issues of temperament and judgment that make him unfit for the job. Indeed, after hearing Trump's alter ego on tape going on about his prowess with the opposite sex, the first thing that came to mind was the letter his physician allegedly dictated but suspiciously seems to have been written by a very grandiose layman instead:

To Whom My [sic] Concern:

I have been the personal physician of Mr. Donald J. Trump since 1980. His previous physician was my father Dr. Jacob Bornstein. Over the past 39 years, I am pleased to report that Mr. trump has had no significant medical problems. Mr Trump has had a recent complete medical examination that showed only positive results. Actually, his blood pressure, 110/65 and laboratory test results were astonishingly excellent.

Over the past twelve months he has lost at least fifteen pounds. Mr Trump takes 81 mg of aspirin daily and a low dose of a statin. His PSA test score is 0.15 (very low). His physical strength and stamina are extraordinary.Mr Trump has suffered no form of cancer, has never had a hip, knee or shoulder replacement or any other orthopedic surgery. His only surgery was an appendectomy at age ten. His cardiovascular status is excellent. He has no history of ever using alcohol or tobacco products.

If elected, Mr Trump, I can state unequivocally, will be the healthiest individual ever elected to the presidency.

Dr. Bornstein does exist, unlike Trump alter ego "John Miller." But his style certainly bears more than a passing resemblance to his patient's.

Whether his "issues" are of a clinical nature or are a matter of character is unknown, but it really doesn't matter. He's got issues. And if he thought he wouldn't be under a much more intense spotlight as a presidential candidate than he ever was as a mediocre TV celebrity and rich playboy, he was extremely naive.  In fact, in some ways, he's almost childlike about it, which makes RNC chairman Reince Priebus's statement to the AP on Friday even weirder than it seems at first glance:

"He's been trying very hard to be presidential and gracious and I think he's actually done a nice job of that lately. I expect him to continue working at it an getting the job done."

That's not the kind of comment you expect to hear about someone who is running for the most important job on the planet. It's the comment you see on a third grader's report card.

On "Face the Nation" yesterday, former Bush official Michael Gerson tried to grapple with this problem. After listening to various GOP officials twist themselves into pretzels trying to explain what it is Trump has to do to gain their favor, Gerson wonders if Trump can properly represent the United States at all:

I think politicians are used to dealing with splitting differences on issues. They're used to their best of, you know, two bad alternatives. But the question is here whether the Republican candidate for president is fit to be president. Whether he has pursued a division, a nativism at the center of American politics that could really change our public life in destructive ways, fundamental and destructive ways? And under those circumstances, you're not talking about this issue or that issue. You're talking about fitness. You're talking about, can this man represent America in the world? Can he represent all our citizens in -- in -- in this process. And those are open questions right now given the way that he has gotten to this point.

That's not an open question. Of course he is unfit. He is an authoritarian demagogue who lies as a matter of course. The day he becomes president, the world will view the United States as a rogue superpower bound by no rules or norms or law. He seems to sincerely believe that "unpredictability" is a positive attribute in an American leader.

"I call it the Madman Theory, Bob. I want the North Vietnamese to believe I've reached the point where I might do anything to stop the war. We'll just slip the word to them that, "for God's sake, you know Nixon is obsessed about communism. We can't restrain him when he's angry—and he has his hand on the nuclear button" and Ho Chi Minh himself will be in Paris in two days begging for peace."

As it turned out, Nixon may not have technically been a "madman" but he was a pathological liar with a whole bundle of issues that made him make some extremely destructive decisions.  It would be a tragic mistake to elect another one.