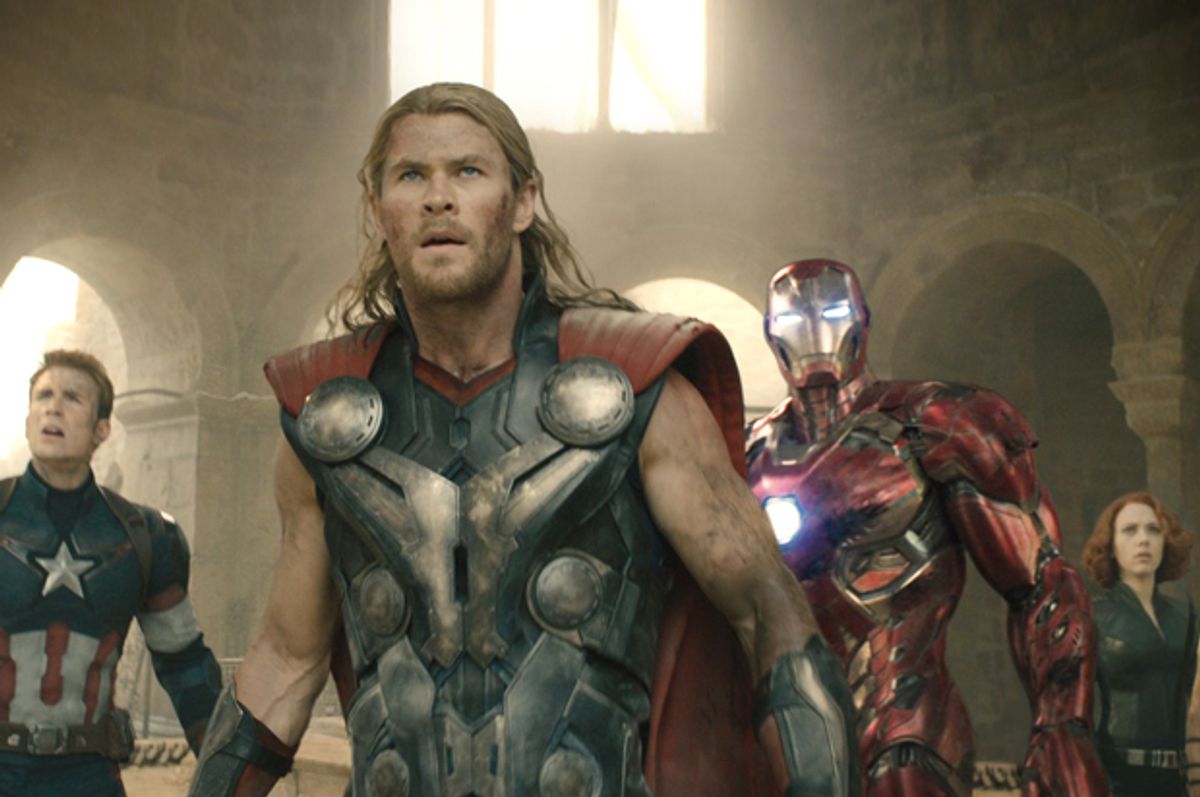 “Batman v Superman: Dawn of Justice” might be the biggest disaster to ever make $870 million. Those numbers would be unspeakably enormous for any other franchise (the folks behind “Divergent” would be dancing in the streets), but they were a huge disappointment for Warner Bros. The final entry in Christopher Nolan’s Batman trilogy, “The Dark Knight Rises,” grossed over $1 billion, while Zack Snyder’s “Man of Steel” took in $668 million at the box office. With their powers combined, the heroes’ first onscreen meeting should have flown much, much higher.

As it stands, the movie’s grosses have to be extremely embarrassing for WB and DC Comics, who had been hoping to mount a Cinematic Universe to compete with Marvel’s successful “Avengers” franchise. Although “Captain America: Civil War” was released less than two weeks ago, it has already made more money ($966 million at the time of writing) than “Batman v Superman” has in two months. That’s not even the worst of it: Snyder’s film has also been bested—both internationally and domestically—by Disney’s “Zootopia,” which is threatening to cross the billion-dollar threshold. Another children’s movie is also on the verge of surpassing “BVS:DOJ”: Jon Favreau’s live-action remake of “The Jungle Book” has earned $829 million—and counting.

Reports of a massive shakeup at Warner should then be surprising to absolutely no one. According to The Hollywood Reporter, the studio has tapped Jon Berg, the executive vice president of WB, and Geoff Johns, the chief creative officer at DC, to head up DC Films. “With Berg and Johns, Warner Bros. is attempting to unify the disparate elements of the DC movies with a seasoned film exec and a comics veteran that together hopefully can emulate the way Marvel Studios has produced its films under the vision of president Kevin Feige,” THR reports.

In the past, Warner Bros. has lacked a cohesive strategy when it comes to the studio’s superhero products, and rumors of reshoots on “Suicide Squad” to “lighten the tone” of the David Ayer-directed film (which WB denied) did little to assuage those concerns. This announcement, however, is very good news for the future of the studio’s men-in-tights canon: While solidifying its brand, Warner Bros. claims that it will remain committed to putting filmmakers first. Notably, WB canned Seth Grahame-Smith, who was set to direct the Ezra Miller-starring “The Flash.” The “Pride and Prejudice and Zombies” writer had never directed a film before, and THR reports that WB is seeking a “more seasoned filmmaker who can not only handle a large $150 million-plus movie but who can also have an authoritative stamp.”

What that means is that Warner Bros. will be allowing name-directors to continue to shape the studio’s films with their own unique creative vision. That decision is in direct contrast with the Marvel template: Aside from Joss Whedon, Feige is known for tapping hired hands, usually up-and-comers, who won’t get in the way. When re-launching “Spider-Man” for the third time in 15 years, Marvel went with Jon Watts, whose only previous credit was “Cop Car,” the modestly received 2015 indie about two kids who steal a police vehicle. Scott Derrickson, best known for directing “The Exorcism of Emily Rose,” will take the reins on “Doctor Strange.” Peyton Reed, the man behind “The Break-Up,” replaced Edgar Wright when he dropped out of “Ant-Man.”

The Wright debacle is extremely telling about the state of Marvel’s brand strategy, in which directors often have very little control over the final product. The “Cornetto trilogy” director had been developing “Ant-Man” since 2006, before Marvel was a Hollywood titan. (Those were the days of “Ghost Rider,” after all.) “It’s… important to consider that, in the extended period of time Ant-Man spent gestating,” ScreenRant’s Jeff Carter explains, “the Marvel Cinematic Universe expanded and morphed into an integrated, cohesive world, and Wright’s stylistic, irreverent concepts may have no longer functioned within Marvel’s vision.” When “Ant-Man” was finally set to begin shooting, Marvel presented Wright with script changes “without his input,” as THR reported at the time, and the director parted ways with the project.

Those changes would have likely made “Ant-Man” into less of an Edgar Wright movie—in the style of his “Shaun of the Dead” and “Hot Fuzz”—than what Marvel always does. That included a scene that would have established links with the other Marvel Cinematic Universe franchises by throwing in cameos from other superheroes. In the end, Marvel got what they wanted: Anthony Mackie’s Falcon (who appears in the “Captain America” movies) popped by to play pattycake with Scott Lang. Even Whedon himself suggested that parting ways with Wright was a huge mistake for the studio, calling Wright and Joe Cornish’s screenplay the “best script that Marvel had ever had.”

Wright’s departure loomed large over the eventual release of “Ant-Man,” which was the second-lowest grossing MCU entry yet (when adjusting for inflation). The studio has had similar issues with other auteurs: After kickstarting the “Captain America” and “Thor” franchises, both Kenneth Branagh and Joe Johnston declined to shepherd their sequels. The beloved Ava DuVernay (who directed the Oscar-nominated “Selma”) was in talks to direct “Black Panther” before bowing out of consideration due to “creative differences” with the studio. In a diplomatic response, DuVernay told Essence of her exit: “I think I’ll just say we had different ideas about what the story would be. Marvel has a certain way of doing things and I think they’re fantastic and a lot of people love what they do.”

Marvel’s insistence on prizing its brand over unique creative vision is arguably holding its movies back. How much can the Marvel Cinematic Universe expand onto itself before its movies begin feel painfully overstuffed? That’s long been the Marvel movies’ Achilles heel: They attempt to shoehorn in too many characters at the expense of telling a simple story well. That complaint plagued both “Iron Man 2” and “Avengers: Age of Ultron,” which simply had too much going on for one movie to contain. In directing the sequel to the most successful superhero movie ever made, Whedon was basically tasked with being an air traffic controller.

This was even true of “Captain America: Civil War,” which was a victim of the studio’s worst tendencies. Directed by Joe and Anthony Russo, “Civil War” contains some of the most eye-popping MCU sequences yet, including action scenes that are thrillingly lightning-paced. Every single blow in their second film under the Steve Rogers banner feels punishingly real. However, many of the supporting players in “Civil War” simply didn’t need to be there, given very little to do. Don Cheadle, playing War Machine, looked actively bored. As nice as it was to see Spider-Man join the Marvel universe, was it all that necessary when Peter Parker is due for yet another franchise? At times, the overabundant ensemble felt more like an Agatha Christie movie than a worthy follow-up to the wonderful “Winter Soldier,” still Marvel’s finest effort.

What made “Captain America: Winter Soldier” such an astonishingly good action film is that at a time when Marvel movies keep getting bigger, the Russo brothers dared to think small. Long stretches of the film are a nimble two-hander, giving Chris Evans and Scarlett Johansson some of their finest material to date. (It’s also the only time Black Widow has felt like a human person, rather than a narrative afterthought in a skin-tight leather suit.) The taut film took its cues from paranoid political thrillers of the 1970s, including “The China Syndrome” and “Three Days of the Condor.” It wasn’t happenstance, after all, that “Winter Soldier” co-starred Robert Redford, who appeared in the latter.

The “Captain America” sequel is perhaps the closest thing that Marvel will see to a true auteurist vision, as the studio continues to move away from the singular to the focus-grouped. Their loss could be DC’s gain. After Patty Jenkins was dropped from “Thor 2,” the director—who helped Charlize Theron win an Oscar for “Monster”—found her way to “Wonder Woman.” Slated for release in 2017, the long-gestating film will finally give Diana Prince the franchise she deserves. Gal Gadot, who is set to fly the superhero’s invisible plane, was a standout in the rancid dumpster fire that was “Batman v Superman,” despite the actress’ limited screentime.

Audiences will have to wait another year to see if Warner Bros. learned anything from its brand synergy facepalm, which amounted to two terrible movies for the price of one. But in the meantime, there’s hope the studio could do right by Bruce Wayne and Clark Kent in the future. Ben Affleck has reportedly written the script for the WB’s attempt to relaunch the Batman franchise, and the actor has certainly proven himself a force to be reckoned with behind the camera. He co-wrote the screenplays to the acclaimed genre films “The Town” and “Gone Baby Gone,” while directing “Argo” to a Best Picture trophy. Affleck will also sit in the executive producer’s chair on “Justice League.”

DC and Warner Bros. have a long way to go in crafting a cinematic universe to rival the empire Marvel has amassed. But for now, they appear to doing the one thing the MCU never has: giving talented directors the creative freedom to help them build it.