The 1 percent's most dangerous weapon: Donald Trump and the global acceleration of income inequality 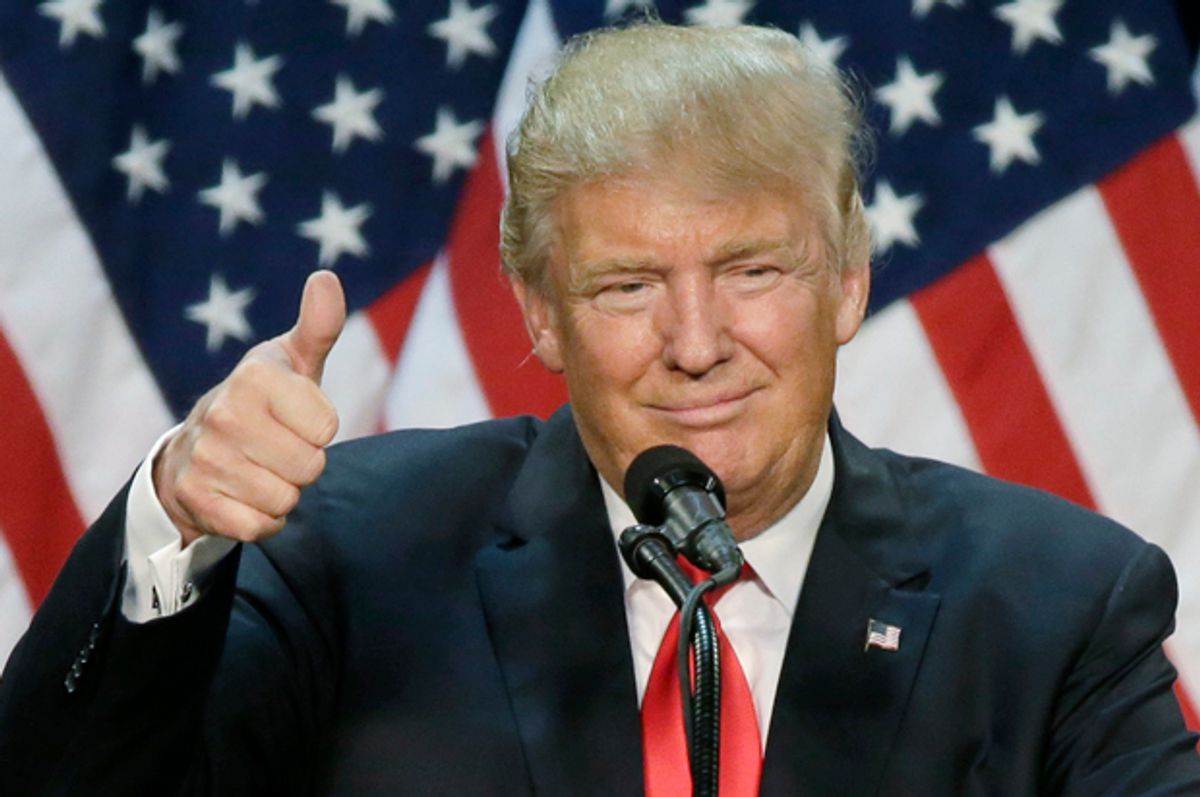 No shocker, Donald Trump is once again defying conventional political wisdom and refusing to release his income taxes publicly. So far, his gut instincts have served him well in the first successful hostile takeover of one of America’s two major political parties by an individual. Trump knows better than most, great wealth, like mushrooms, flourishes best in darkness and with a steady stream of excrement to nourish  it, which thanks to the corporate news media, 2016 has already supplied in ample quantities.

Perhaps the candidate was emboldened by the lack of news media blow back on his stunning reversal on his pledge to “self-finance” his presidential campaign.  The original story line was so Capraesque; the last great white hope billionaire willing to put his fortune at risk to redeem the Republic sullied by elites that had sold out the national interest to feather their own nests. But now with Trump’s selection of Steve Mnuchin, a hedge fund founder and second generation Goldman Sachs alum, as his finance chair, Trump is back in proper alignment with the hedge fund pirates of the Caribbean who to this day continue to profit from the 2008 Wall Street’s heist of the Main Street economy.

Of course, with much of the billion dollars that Trump committed to raise likely to go to television ads, we can hardly expect the corporate news media, that’s already made a killing on the sensational GOP primary, to hold him accountable for a spectacular flip-flop that’s very much in their interest. As reported on Democracy Now  last week,  CBS CEO Les Moonves, speaking at a Morgan Stanley conference earlier this year, could not contain his bottom line glee over a Trump candidacy. Oh, but better yet, think of the analytics driving a Trump presidency?

“Who would have thought that this circus would come to town? But, you know, it may not be good for America, but it’s damn good for CBS. That’s all I’ve got to say. So, what can I say? It’s — you know, the money’s rolling in,” Moonves told the crowd. “This is — this is something. I’ve never seen anything like this. And, you know, this is going to be a very good year for us. But—sorry, it’s a terrible thing to say, but bring it on, Donald. Go ahead. Keep going.”

For decades, Donald Trump has used secrecy around his money, like how much he has and how much he is worth, to maintain absolute  control over his billionaire narrative. For Trump, as with so many of his ardent followers, great wealth in of itself, is evidence  of character  and innate superiority. It is after all,  “proof” of Trump’s claim to moral authority and what he contends is his unrivaled business acumen and management skills. Trump knows whats best for America and the world because he is  very rich, that’s his sole qualification.

Trump is hardly alone. As we learned with the multiple bombshells set off in the aftermath of the release of the Panama Papers, the ruling global elites need the cover of byzantine structures like limited liability shell companies in off-shore tax havens to conceal their wealth. No doubt, if the scale of it were to be disclosed, it might impinge on their ability to use the  vast influence their money already buys to insure their capital remains beyond scrutiny or taxation.

Meet the global citizens of nowhere in particular who drive up rent wherever they land for the season.

As I reported earlier this year, increasingly the world is becoming hip to the chicanery involved with devices like the Delaware limited liability corporations and that state’s pro-business corporate registry which permits the wealthiest individuals and corporations to reduce their visibility and their tax obligations with the utility of  a legal address that is little more than an anonymous mail drop. Media corporations are using the sam playbook.

Back in March the Guardian reported that of Trump’s 515 corporations he lists on his Federal Election Commission disclosure form, 378 were domiciled in Delaware. Meanwhile, the Guardian reported that both former Secretary of State Hillary Clinton and former President Bill Clinton have their own anonymous sounding Delaware-based corporations, set up to handle their six figure speaking and consulting fees. By some expert estimates the Delaware scheme results as much as $9 billion in lost tax revenue to other jurisdictions where the business activity actually takes place.

Just as with the U.S. multi-national corporate inversions, where American companies buy foreign firms so they can change their nominal address, these wealth preservation and accumulation strategies have a consequence felt by those who can least afford it, regular working class folks, who have only one address, the one where they sleep at night.  That’s who bares  this shifted  tax burden.

These days big capital spans the world in a nano second with just the click of a mouse. The unprecedented mobility of wealth has the planet's governments, and even states and provinces with in countries, all  in a cutthroat competition.  The goal — offer the lowest tax rates in order to convince the biggest corporations and wealthiest investors that their country is the best place to park their money.

A few years ago, when I was doing a story for WNYC about these issues, Jeffrey Sachs, an economist and professor at Columbia University, observed that since World War Two,  globalization has given the super wealthy and multinationals  all the leverage over the nation-state. ”They each play one government off the other, 'oh you can't tax me the other one is cutting my tax', oh you have to cut the taxes to match this one' what we call the race to the bottom."

"Global capitalism is something relatively new.” said Sachs. ”Over the course of about five decades with a lot of very conscious effort the United Kingdom and the United States and some others have really created a global system, and it is a system, in which huge money is systematically protected."

Sachs says for U.S, multi-nationals the system has made it possible to legally hold on to hundreds of billions of dollars in profits through intricate off-shore arrangements involving places like Delaware and the Cayman Islands. Both the General Accounting Office and the Congressional Research Service have documented the growing trend Sachs has been tracking.

"This is what is happening everywhere and this why our corporate sector, flush with profits, falling all over themselves with money right now, ends up paying the lowest amount of Federal taxation in decades," says Sachs. "And the politicians are driven to meet the corporate lobby interests because the corporations end up paying for the campaigns or the give jobs to the politicians after they leave office."

This is, for the most part what owns and drives our politics which for some time has been nothing more than the alchemy of deceit. They promise peace but make war. They pledge broad based prosperity but deliver a public sector deeper and deeper into debt to the capital interests  for whom patriotism is  just an historical footnote. (Of course, here in the U.S. the  wealthy  can often buy state and local  government debt and collect tax free interest on it. How’s that for a rigged system?)

Sachs, author of  "The Price of Civilization," says this trend is contributing to a widening wealth disparity. This erosion of government tax bases around the world, he argues, undermines the ability to   fund their operations and keep past commitments  made to their people. The result is governments spending  deeper into  debt which than prompts  calls for greater austerity.

Now, 16 years into the 21st century, the people from places as diverse as Detroit, Flint, Puerto Rico,  Atlantic City and Greece are all in some  form of long-term debt bondage where their sovereignty has either been lost, or is endangered, by massive structural debt that forecloses their future. As the New York Times recently reported, this is just the tip of a much more pervasive problem when it comes to mounting public debt.

No doubt systemic public and political corruption have helped rack up public debt world wide. But we can’t ignore this global wealth preservation machine, which permits capital to hide till it can take flight, unbound by any earthly social obligation.