The Republicans want to be conned: Paul Ryan and the GOP are letting themselves be duped by Trump 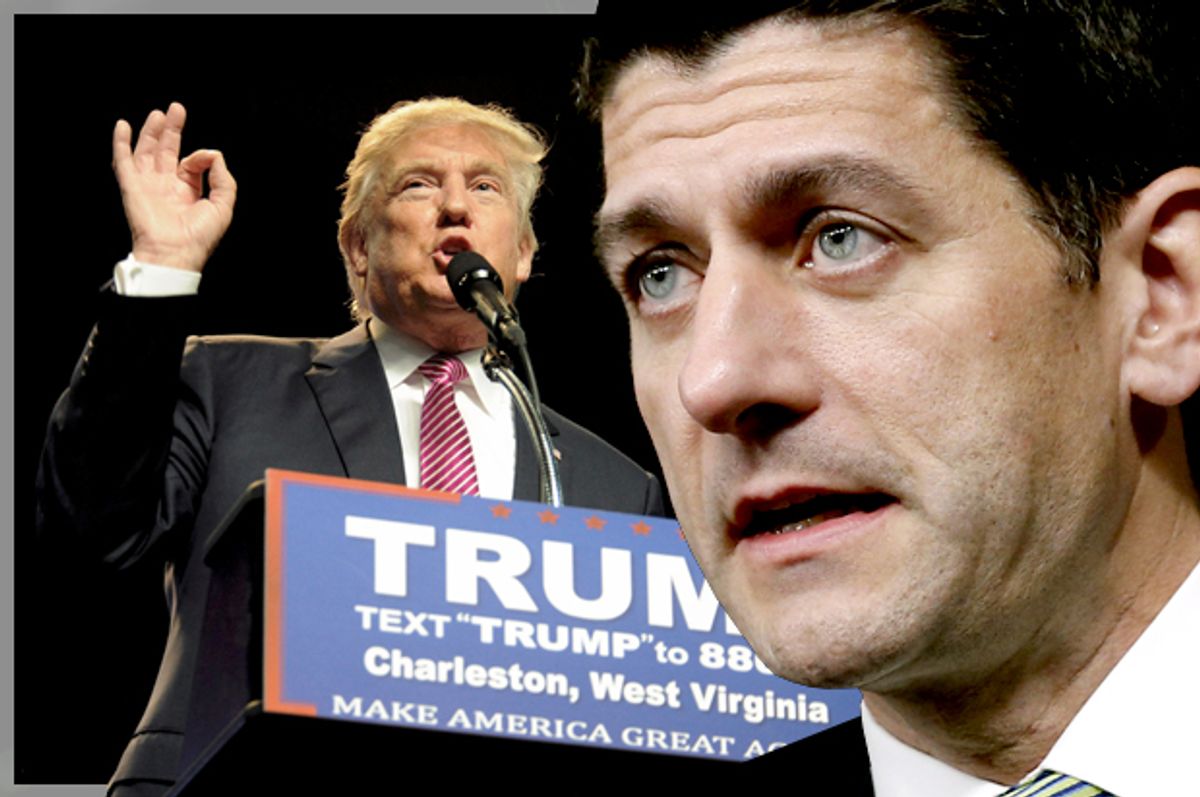 Donald Trump and House Speaker Paul Ryan had a nice little meeting last week in Washington, DC, and afterwards they issued a joint statement declaring how perfectly pleasant it was. “This was our first meeting,” their statement read, “but it was a very positive step toward unification.” Following their little get together, Ryan held a press conference and was sanguine about his budding relationship with Trump, though he remained guarded. “I was very encouraged with this meeting, but this is a process,” Ryan explained. “It takes a little time.” He referred to the unification “process” eight times in the course of his remarks, making clear that while he may be inclined to formally endorse his own party’s presumptive presidential nominee, he couldn’t do it just yet. The “process,” after all, has to be observed.

It’s all garbage and nonsense, of course. But Ryan prefers to put us all through this rigmarole because he needs to cover his own ass politically. The “process,” if you want to call it that, is mainly to buy Ryan some time. He’s caught between his ambitions to remake the GOP is his own image and the demands of the rank-and-file that he line up behind Trump. So for the time being he’s putting on a show of very soft defiance – he’s not opposed to Trump, but he wants to secure some commitments on “shared principles” before he can endorse. He has to “get to know” Trump. So for now he stands on “principle” while leaning towards and endorsement, which will eventually happen because, as McKay Coppins writes, Paul Ryan is nothing if not a good soldier.

The obvious problem with all this is that there is no “getting to know” Donald Trump. He’s an ideologically incoherent cartoon character, an intangible cloud of hair spray and cultural resentment. He flits between policy positions like some sort of bigoted hummingbird. His word is worthless, and his loyalty to the GOP is nonexistent. The only thing you can count on him to do is tell you what you want to hear, then break his promise.

But Ryan and the rest of the House GOP leadership are ready and willing to let themselves be conned by Donald Trump. As CNN reports this week, Ryan is dispatching policy aides to meet with Trump’s team as part of an “intensifying effort to promote a unified message that Republicans hope they can campaign on up-and-down the ticket.” Trump’s team is also apparently reaching out to the heads of key House committees to talk shop and calm the jitters of the Republican establishment.

“Our teams are meeting next week to go over the deeper meaning of the policies that we have been talking about that come from the principles we universally share as Republicans,” Ryan said Saturday at the Wisconsin Republican Convention in Green Bay.

The “disagreements” here are on the issues that are central to Trump’s popularity and appeal among Republican voters: his vicious nativism, his opposition to free trade agreements, and his hardline anti-immigrant posturing. I don’t think Ryan is naïve enough to believe that Trump can actually be coaxed into becoming a good Ayn Randian disciple like himself, he’s just trying to find enough areas of broad agreement that it becomes politically more workable to endorse the nominee. Trying to pin Trump on a specific policy issue is futile – as Trump himself has said, none of the positions he articulates are set in stone, they’re all just “suggestions” that can be renegotiated, abandoned, and reabsorbed as political circumstances warrant. Ryan and crew understand this, and they’re going through the motions. It’s one big con and everyone is in on it.

As Robert Kuttner writes, this slowly firming Trump-Establishment accord is little more than a pageantry of opportunism. The Establishment needs to find a way to make nice with Trump because a large plurality of their voting base rocketed him to the presidential nomination, so they’re looking for “shared principles” in an unprincipled lout. Trump understands that whatever shot he has at winning the presidency rests requires the party to get behind him, and the best way for that to happen is to pretend to get along with the same establishment he’s spent months tearing down as incompetent and corrupt. They’ll find a way to make nice because it’s in both their interests, but before then we have to let Paul Ryan very publicly work through his “process.”