A call for action: Majority of Americans say the U.S. must do more to help refugees

Amnesty's Refugees Welcome Index shows China is most welcoming and Russia is the least. U.S. is just above average 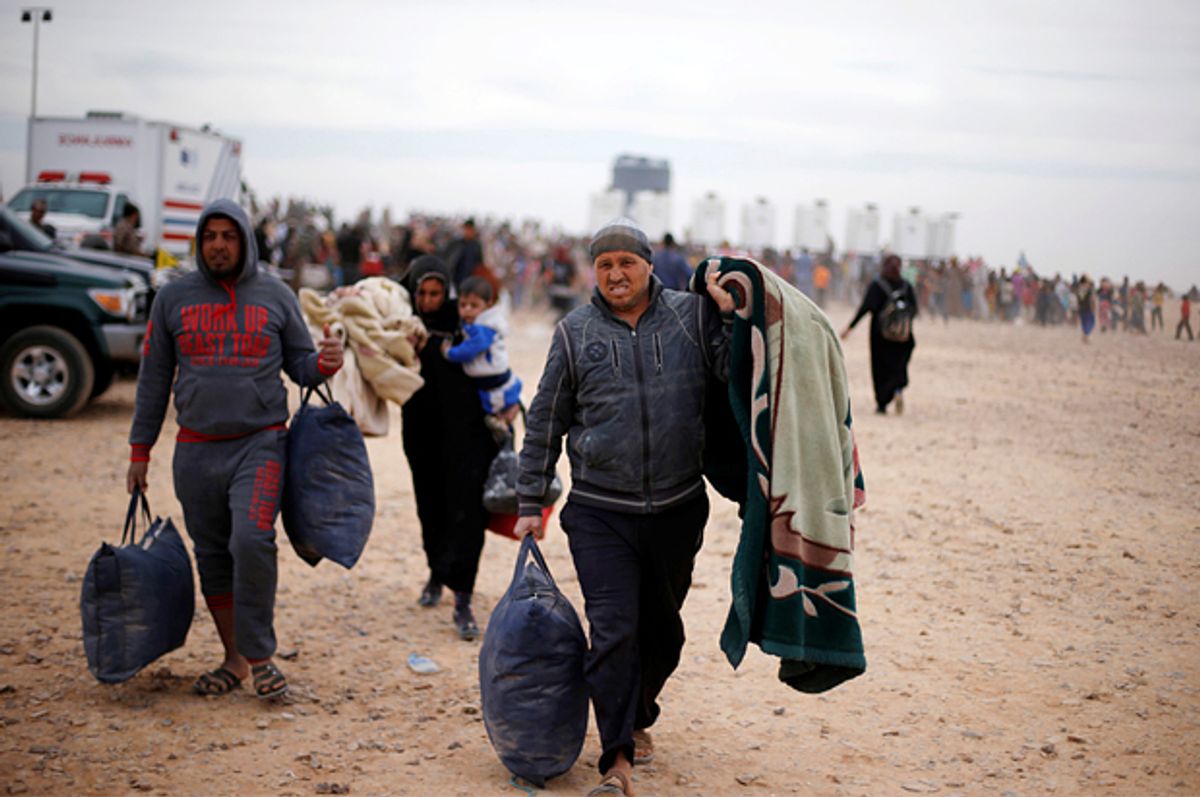 The world is faced with the worst refugee crisis since World War II, and, while racism and xenophobia are on the rise, a new global survey found that average people are much more supportive of refugees than media reports often make them out to be.

In particular, a new research project called the Refugees Welcome Index found that a majority of Americans agree that their government should do more to help refugees, even as the U.S. falls extremely far behind on its pledge to admit just 10,000 Syrian refugees.

The Refugees Welcome Index is a global survey of more than 27,000 people in 27 countries. It was commissioned by leading human rights organization Amnesty International, and was carried out by the renowned public opinion research consultancy GlobeScan.

The vast majority, 71 percent, of Americans would let refugees into the country.

More than one-fourth, 27 percent, of people in the U.S. say they would accept refugees into their neighborhood.

And even 15 percent of Americans are willing to welcome refugees in their own homes.

Only 22 percent of Americans, less than one-fourth of the country, said the U.S. should refuse to let refugees into the country.

The study shows that the anti-refugee sentiment that is widespread among right-wing politicians is in fact out of touch with the majority of the population.

"Americans feel compassion and concern for refugees, and they do not want to turn their backs on people fleeing war and horrific violence," said Margaret Huang, Amnesty International USA’s interim executive director, in a statement.

More than half of U.S. governors have said Syrian refugees are not welcome in their states. Amnesty International USA has documented attempts to block or limit refugee resettlement in at least 16 states.

"This new data sends a clear message to officials in the U.S. to stop the fear-mongering and to do more to help vulnerable refugees," Huang explained. "Those who want to block refugees from coming into the U.S. are completely out of step with the American people."

Today there are approximately 60 million people who have been displaced by war in the world today, according to the U.N. High Commissioner for Refugees. The UNHCR calls this "an all-time high as violence and persecution" are on the rise around the world.

The largest refugee group consists of Syrians. Almost 5 million Syrian refugees are registered with the UNHCR, and more than half of the country's entire population has been displaced since war broke out in 2011.

Although the U.S. has fueled the catastrophic war in Syria, spending billions arming, training and supporting rebel groups, it has failed to take many refugees.

In comparison, Germany, which has one-quarter of the U.S. population, took more than 1 million refugees in 2015 alone.

Canada, which has just one-tenth of the U.S. population, resettled 25,000 Syrian refugees between November and the end of February.

And the tiny Middle Eastern countries Lebanon and Jordan have together taken roughly 2 million Syrian refugees. (One in five people in Lebanon is a Syrian refugee.)

Meanwhile, the U.S. has still thus far failed to live up to this measly 10,000 promise. As of May, seven months into its pledge, the Obama administration had resettled only 1,736 Syrian refugees.

"Amnesty International USA is calling on President Obama to increase the number of refugees the U.S. accepts annually and to push Congress to provide the appropriations necessary to ensure that resettled refugees, and refugees globally, have the support they need," the rights group said in a statement.

“The U.S. can and must do more,” insisted interim Executive Director Huang. "President Obama is already falling short of his own resettlement goals, and refugees are running out of time."

"These people are fleeing horrific human right abuses, and we have an obligation to protect them," she added. "It’s time to live up to our responsibilities and do more – not less – for refugees."

The Refugees Welcome Index also measured public opinion on the refugee crisis in 26 other countries. It found that anti-refugee sentiment is not as widespread as many people may have assumed.

Globally, more than three-fourths, 80 percent, of people would welcome refugees into their country.

One-third, 32 percent, of people said they would accept refugees in their neighborhood.

Almost half, 47 percent, would welcome refugees in their city, town or village.

One in every 10 people said they would even take refugees into their home.

And two-thirds, exactly 66 percent, of people said their governments should do more to help refugees.

The global median score was 52. The U.S. garnered 60, slightly above average.

China, Germany and the U.K. are the most welcoming countries, with ratings in the mid-80s.

And Greece, Jordan and the U.S. trail behind, with scores in the 60s.

Russia was the least-welcoming country, with a rating of just 18.

Only 1 percent of Russians would accept a refugee in their home. In China, the most-welcoming country, by contrast, a whopping 46 percent of people, almost half the population, would take a refugee into their home.

Globally, just 17 percent of people said they would refuse refugees entry to their country. The study found only one country, Russia, in which more than one-third of the population would deny refugees access — in Russia's case, this figure is a shocking 61 percent.

Roughly three-fourths, 73 percent, of people worldwide agreed that people fleeing war or persecution should be able to take refuge in other countries.

“We did not expect to see such strong levels of solidarity with refugees, but the results reflect the inspiring human compassion people feel to those fleeing war,” Amnesty International Secretary General Salil Shetty said in a statement.

“People seem to be more committed to principles set down in international law than many of their governments, who are increasingly tearing up or ignoring commitments that have stood for 65 years,” he added.

One in every 122 people on earth is now either a refugee, internally displaced, or seeking asylum, Amnesty International has emphasized.

The human rights organization's "researchers have been monitoring the abuses refugees have been subjected to as they attempt to flee by land or by sea," Amnesty noted in a statement. "They are facing deplorable and dangerous conditions in camps, chaos at borders, and thousands upon thousands of desperate people kept in limbo awaiting a diplomatic solution that seems illusive."