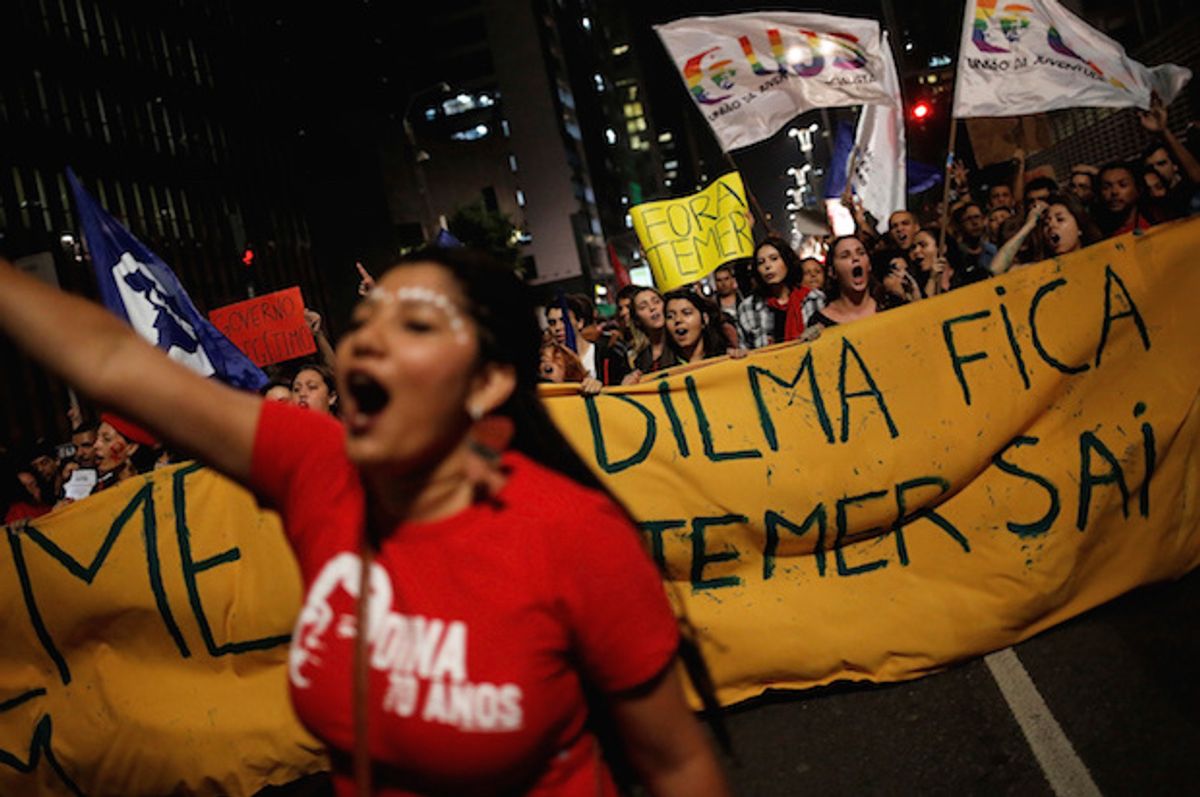 Women shout slogans during a protest against Brazil's interim President Michel Temer and in support of suspended President Dilma Rousseff in Sao Paulo, Brazil, on May 17, 2016. The banner reads "Dilma stays, Temer out" (Reuters/Nacho Doce)
--

Brazil's president says she has been deposed in a "coup," as a dire political crisis is unfolding in the country. The Senate vice president also says the interim head of state has put the elected president "under siege" by the military.

For weeks, the country's right-wing opposition has waged a coordinated campaign against the left-wing President Dilma Rousseff.

Although Rousseff has not been charged with a crime, Brazil's legislature voted to suspend her from office over accusations that she tampered with government accounts in order to hide a budget shortfall — a non-impeachable offense that she says numerous other governments have done.

She is now facing a Senate impeachment trial for a non-impeachable offense.

Meanwhile, Rousseff, who has blasted the campaign as an illegitimate "coup," has been replaced with right-wing interim President Michel Temer, who is himself facing a slew of serious corruption charges.

Temer immediately replaced Rousseff's progressive and diverse cabinet with right-wing, all-white, all-male members — the first time since 1979 that no women have served in Brazil's presidential cabinet.

Renowned scholar Noam Chomsky has characterized the developments in Brazil "as a kind of soft coup," stressing that Rousseff is "being impeached by a gang of thieves."

The U.S. has remained remarkably silent about the chaos, although it quietly said it will recognize the interim government, leading to accusations that it approves of the right-wing slow-motion coup.

Thousands of Rousseff's supporters have rallied across the country, protesting what they are calling a coup. Demonstrators are emphasizing that the right-wing interim president and many of his allies face actual corruption charges, while the suspended elected president has not even been charged with a crime.

Brazil's media is dominated by a few right-wing oligarchs, and there has been "a lot of fake news" going around in Brazil, NPR explained in a recent broadcast.

A University of Sao Paulo study found that 60 percent of the most-shared articles on Facebook in the run-up to the lower house's vote to impeach Rouseff were false.

Ecuador, Venezuela and El Salvador recalled their ambassadors from Brazil this week in protest of Rousseff's suspension.

Senate Vice President Jorge Viana said on Thursday that troops were deployed by interim President Temer to surround the Palácio da Alvorada, the president's official residence in the capital, Brasilia.

Viana, who is part of Rousseff's left-wing Workers' Party, said he and other senators had to go through a militarized checkpoint and were forced to wait a long time to see her.

His comments were reported by Brazilian media outlets. They were also reported by major Latin American news network TeleSUR.

"Dilma is under siege. I just visited her, along with other parliamentarians, and we had to identify ourselves, [and] wait a long time for phone calls we made to connect, to see if we could have a simple visit with President Dilma," Viana said in a speech in the Senate on Thursday.

"Does that mean that the elected president is under siege? What country is this? What provisional government is this? This is a full democracy? This is the full functioning of the institutions?" he added.

A Brazil-based journalist who recently visited Rousseff's residence told Salon, "We had to go through two checkpoints, which I thought was odd but not crazy." They also had to identify themselves twice, but said it did not seem unusually militarized.

The journalist said that a guard had a shotgun at the second checkpoint, yet qualified, "Heavily-armed is normal for a presidential guard in a country where military police patrol tourist beaches with assault rifles and black-and-grey camo uniforms."

Sánchez Cerén, president of El Salvador, has insisted that Rousseff’s ouster has "the appearance of a coup d’état."

In an interview with Democracy Now this week, Chomsky likewise dubbed the chaos a "soft coup."

He noted that the Workers' Party has indeed been involved in some corruption, even while it "did make some considerable positive changes." But "as even The New York Times pointed out, Dilma Rousseff is maybe the one ... leading politician who hasn’t stolen in order to benefit herself," Chomsky stressed.

Rousseff is "the one leading politician who hasn’t stolen to enrich herself, who’s being impeached by a gang of thieves, who have done so," he repeated.

"She’s being charged with manipulations in the budget, which are pretty standard in many countries, taking from one pocket and putting it into another," Chomsky explained.

"It’s a kind of a soft coup. The elite detested the Workers’ Party and is using this opportunity to get rid of the party that won the elections," he continued. "They’re not waiting for the elections, which they’d probably lose, but they want to get rid of it, exploiting an economic recession, which is serious, and the massive corruption that’s been exposed."

Chomsky also pointed out that there have been at least three U.S.-backed coup attempts in Latin America in the 21st century — in Venezuela in 2002, in Haiti in 2004 and in Honduras in 2009.

An interview Rousseff conducted with Pulitzer Prize-winning journalist Glenn Greenwald, who lives in Brazil, was also released this week by The Intercept. In it, the suspended elected president blasted the new coup regime.

"It seems to me that this interim and illegitimate government will be very conservative in every aspect, one of which is the fact that it is a government of white men, without blacks, in a country that in the last census in 2010 — and I think this is very important — more than 50 percent of the population self-identified as being of African origin," Rousseff said.

She stressed, "I think that not having any women or black people in the government shows certain lack of care for the country you are governing."