A road map to freedom: What the world could learn from Ireland's fight for LGBT rights

On May 23, 2015, Ireland became the first country to legalize gay marriage by popular vote—here's how it was done 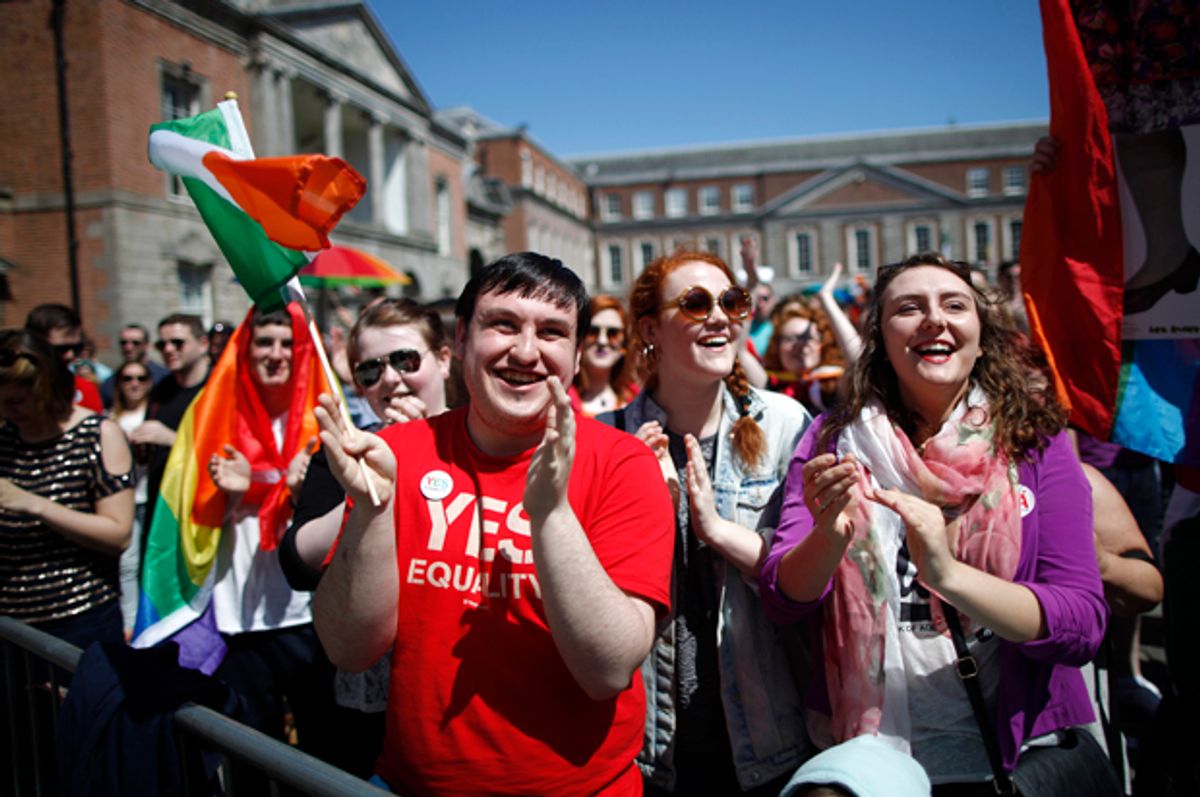 Yes supporters celebrate as first results in the Irish referendum start to come through at Dublin castle, Ireland, May 23, 2015. (AP/Peter Morrison)
--

Most communities who have been oppressed have had every opportunity to work out the implications of the oppression in their early lives. As children, they hear the stories; they have the books around them or the ballads. Gay people, on the other hand, grow up alone. There are no ballads about the wrongs of our past; the martyrs are all forgotten. It is as though, in the words of the gay American poet Adrienne Rich’s phrase, ‘you looked into the mirror and saw nothing’. Thus the discovery of a gay history and of a gay tradition and a sense of gay heritage has to be done by each individual as part of the road to freedom.

Gay history is a set of lonely shadows, dotted lines, stories not told, isolated suffering, silences and marginalisations. Thus the idea of individual witness and the idea of each gay person having a story to tell go beyond the personal into the political. It moves our lives from shadow into substance. It creates a sense of community and joins the dotted lines of history. It offers us not only an image of others, but of ourselves.

As with all stories of slow, gradual liberation, there have been some unlikely enabling spirits and some odd and ambiguous heroes on the road towards acceptance of gay people in Ireland. In the early 1980s, it would have seemed absurd to claim that gay people in Ireland would move into the light courtesy of the Irish Constitution of 1937, since it was that very document that allowed the Supreme Court, in a three-two judgment, to dismiss the case which David Norris brought as an Irish citizen and a gay man who sought to have his rights vindicated.

Yet these stories collected by Charlie Bird (in "A Day in May," coming June 1), filled with bracing honesty and heart-breaking personal revelation, make clear that being gay in Ireland was perhaps a more essential aspect of Irish history and Irish reality than anyone was aware. These stories tell of an anguish that arises from silence and intolerance and fear. This was a feeling experienced also by many women in Ireland, and indeed by children. It was a feeling shared by those who belonged to the travelling community, by immigrants and by other who were treated as an underclass or outcasts.

On reading these gay histories and testimonies, in all their clarity and intensity, it is obvious that only a national referendum on the right of gay people to be equal in Ireland could have come close to repairing the damage that was done and setting a new agenda in Ireland. We needed a discussion that would make its way into every town and county in the country, every home and every individual conscience. An act of parliament might have been helpful, but it would not have had the same overwhelming effect as a referendum campaign that would depend on individual witness and personal stories.

The central idea behind the ‘Yes’ campaign was to show civility rather than anger, to use a soft tone. The campaign wished to make clear that we, as gay people, wanted to belong, that we are Irish as well as gay, and members of families who love us before we are anything. We had suffered enough, in any case, from incivility.

In a way, we took the word love from those who had belittled our love, and we reclaimed it. This meant that the people who spoke in the campaign did not propose anything abstract or philosophical, but instead adopted a tone that was honest, personal, true. The campaign just asked its canvassers to tell particular, concrete stories, or let others do so. The aim was to make things personal rather than political, to make the campaign local rather than national, to ask for votes one at a time.

Gay people in Ireland wanted to offer the electorate both excitement and stability. We wanted to ask some people to have the imagination to change their minds, which is itself an exciting process, but we also wanted to emphasise that we wished to enhance what was already there in the best aspects of Ireland – tolerance, easy-going attitudes, caring for your neighbour. While the campaign was modern and slick, it was also old-fashioned and traditional as people went from door to door or used local forums to make their arguments. Central to its success was the working with parents and grandparents, the allowing of gay people to be seen with their loving families.

In the euphoria of winning the referendum campaign, it is important to remember the amount of suffering which rejection and marginalisation caused to gay people in Ireland. And it is important to bear in mind also, in listening to the voices assembled here, that there has been a great deal of prejudice, that many people among us have been willing to be cruel. Discrimination seemed to be almost everyday, almost casual, part of the fabric of the society. It will take more than a single campaign or a single referendum to change things fully in Ireland.

The importance of this book is to show how rich and interesting and utterly individual each gay voice is, and how unique and different each experience of being gay in Ireland has been. Yet there are certain things that stand out and seem to have been part of a pattern. Mainly fear and silence. But also bullying and a deep sense of aloneness. Both the referendum and this collection of voices themselves will help and empower anyone who is starting out their lives as gay citizens in Ireland, but the tone of some of these voices here, and the texture, will make clear that maybe what we have now is only a beginning, a road-map to freedom. There is much work still to be done to make Ireland a more relaxed and equal place for its gay citizens.

Excerpted from "A Day in May," by Charlie Bird, with foreword by Colm Tóibín. Published by Merrion Press. Copyright © 2016 by Colm Tóibín. Reprinted with permission from the publisher. All rights reserved.

Colm Tóibín is the author of eight novels, including "Blackwater Lightship," "The Master" and "The Testament of Mary," all three of which were nominated for the Booker Prize. His most recent novels include "Brooklyn" and "Nora Webster."