A presidential nominee who sees America as a “Third World country,” “nightmare,” “embarrassment” and “hellhole”? 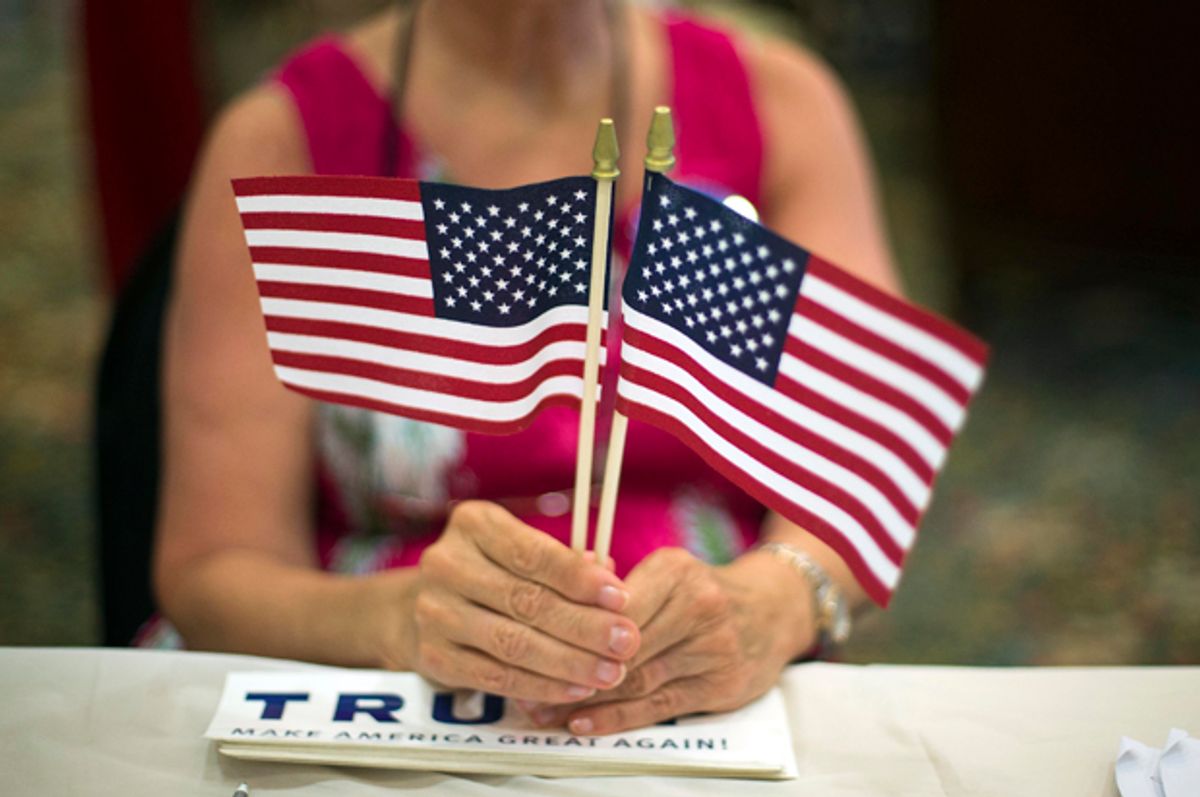 Does the right wing hate America? It has become a legitimate and important question to consider.

Ambrose Bierce, in The Devil’s Dictionary, defined “patriot” as “the dupe of statesmen and the tool of conquerors.” Reasonable people should always view appeals to patriotism with skepticism, and even suspicion. When a political constituency emerges, however, that consistently demonstrates hatred for the essential spirit and character of a country, responsible citizens must collaborate to eradicate the influence of its members, and to minimize its political power.

It seems like ancient history, even though in practical terms it was merely a moment ago, that the right wing appointed themselves as defenders of the flag and keepers of the American creed. Following the 9/11 attacks, supporters of the Bush administration, and even some of its smarmiest officials, created an environment of shame, threat and hostility for anyone critical of the “war on terrorism,” the PATRIOT Act, and the invasion of Iraq. Bill Maher lost his program on ABC after questioning the societal consensus that terrorists are “cowards,” and Ari Fleischer – then press secretary for President Bush – said that the post-9/11 era was one in which people had to “watch what they say.”

When the Dixie Chicks ridiculed Bush’s foreign policy during a concert performance in London, right wing pundits organized a boycott, and many country radio stations cooperated. Filmmakers, writers, college professors, and even mainstream Democratic senators found themselves facing accusations of “anti-Americanism” for expressing dissent against the Iraq War. Phil Donahue, despite having the highest rated program on MSNBC, received an unceremonious dismissal from television, because his anti-war position presented “a difficult public face” for the network, especially given that its competitor, Fox News, was taking every opportunity to “wave the flag,” in the words of an internal memo leaked to the New York Times.

The right wing would never accept anything less than triumphant declaration that the United States is the “greatest country in the world.” American superiority was the default doctrine, taken on faith, without any evidence or analysis necessary.

In 2016, the right wing has elected as its party nominee for president a vaudevillian freakshow who routinely bashes and brands America as a “Third World country,” “nightmare,” “embarrassment,” and “hellhole.” The most significant change to occur in the interim period separating Bush jingoism from Trump anti-Americanism is the ascension of a black man with an Arabic-sounding name to the White House. Suddenly, in the eyes of right wing paranoiacs, America transformed from an Edenic paradise to an open-air torture chamber. Anyone so optically challenged as to not see the racist motivations for the extreme dislike of President Obama is intellectually blind, and likely an unhelpful citizen.

The distortion of Obama – a moderate Democrat – into a monster has morphed into resentment toward the country that twice elected him. Dennis Miller, in his insipid remarks on the Bill O’Reilly show, regularly announces that “the country is gone.” The idea that an America worthy of love and respect has vanished – in a mere eight years – is a continual theme of conservative commentary. It is also the gust of flatulence that lifted Donald Trump into political prominence. His slogan, “Make America Great Again,” implies that the country is not great, but once was. Blacks, Latinos, women and gays – all of whom enjoy more opportunity and liberty now than ever before – would disagree, but their disagreement is largely irrelevant to the Trump movement. Making America great again is a nostalgic signal to feeble white voters, emotionally unequipped to deal with the reality that their story matters less and less to an American culture and economy where racial, ethnic and sexual minorities continue to gain power and authority.

In their opposition to immigration, mockery of diversity and advocacy of theocracy, the right wing demonstrates that it not only hates what America has become, but has no understanding or appreciation for what America has always been.

What has always made America great is its promise of freedom expansion and enlargement, its integration of various people with different beliefs and behaviors into a shared community, and its foundation as a secular republic with the ability to adapt to new information and make ethical improvements.

The philosophy of the American Revolution was beautiful, but the brutality and hypocrisy of its implementation made the words of the Constitution seem like a cruel joke to those who could not vote, could not live in safety and freedom, and who could not even find a government willing to recognize their humanity. Martin Luther King saw those words not as cynical, but as a “promissory note,” and he, more than most, gave legitimacy and credibility to the American experiment in self-governance.

America triumphs whenever it succeeds in extending freedom and opening opportunity. While still far from perfect, it has made magnificent progress in the expansion of freedom for women, blacks, Hispanics, gays and a variety of other people once locked in the basement of American institutions and culture. It is this exact measure of progress – the fulfillment of the American promise – that frightens and angers much of the right wing constituency. Consistently derisive toward women, supportive of voter suppression and indignant over the protection of rights for gay and transgendered Americans, the right wing illustrates nostalgia for an America that was still in the process of evolving into America.

Walt Whitman believed that America was a new country in need of new poets. It was the first nation to make the possibility of human diversity, and unity through individuality, real and actionable. In Leaves of Grass, he writes that he “speaks the password primeval” and “gives the sign of democracy.” It, like he, contains multitudes, and includes the voices of slaves, prostitutes, deformed persons, the diseased, thieves and dwarfs.

The egalitarian spirit of America is also a hospitable spirit. What defines America as a culture is its integration. Unlike most other nations, America is not, and has never been, homogenous. It is a blend of various peoples and practices. America’s vitality is directly attributable to its variety. Its excitement is a product of its diversity.

When the right wing applauds a man who proposes the construction of a wall along the Mexican border, the deportation of 11 million immigrants, and the prohibition of Muslim entry into the United States, they reveal themselves as people fundamentally opposed to American culture and sociology.

Recent studies from political scientists prove what everyone lucid has long suspected: Donald Trump’s supporters are motivated primarily and most powerfully by dislike for minorities, their belief that President Obama is a Muslim, and their outrage over how, according to their weird and warped interpretation of history and politics, the federal government is giving too much help to blacks at the expense of whites.

Trump supporters, and other elements of the right wing, praise the Founding Fathers, but they seem most affectionate toward their worst aspects: racism, chauvinism and ethnocentrism.

The best aspects of the founders do not seem to interest the right wing. In fact, the right wing routinely expresses disgust for the ideas that made the United States possible. As Matthew Stewart documents and explains in his fascinating account of the American Revolution, Nature’s God: The Heretical Origins of the American Republic, the Founding Fathers, with few exceptions, were secular men of the Enlightenment. Although they believed in religious freedom, they viewed organized religion with skepticism, if not outright contempt.

The founders made a deliberate effort to separate church and state, and in doing so, hoped to minimize the influence theological precepts would have on public policy. As important as secular philosophy and governance is to American history and politics, the right wing would destroy it, and welcome a Christian Ayatollah as national leader.

In February of 2015, a Public Policy Polling national survey found that 57 percent of Republicans would like to dismantle the Constitution, and establish Christianity as the State Religion.

For all of America’s flaws and failures, it is a country vastly superior to the theocratic and ethnocentric nightmare the right wing envisions, and hopes to usher into reality: a country where clerical bullies regulate the private lives of citizens by fiat, immigrants are treated as enemy invaders, and blacks are kept under the white supremacist boot in fashion reminiscent of Jim Crow.

The right wing often accuses liberals of disliking America, but upon scrutiny, this accusation reads like projection. While liberals have spent the last century making America more inclusive, just and loyal to its foundational promise of liberty and equality, the right wing has dreamt of living in an imaginary autocracy. The right wing nation looks nothing like the place that they clearly despise: the America that actually exists.