Adele's map for moving on: "Send My Love (To Your New Lover)" will show you a new way to bounce back 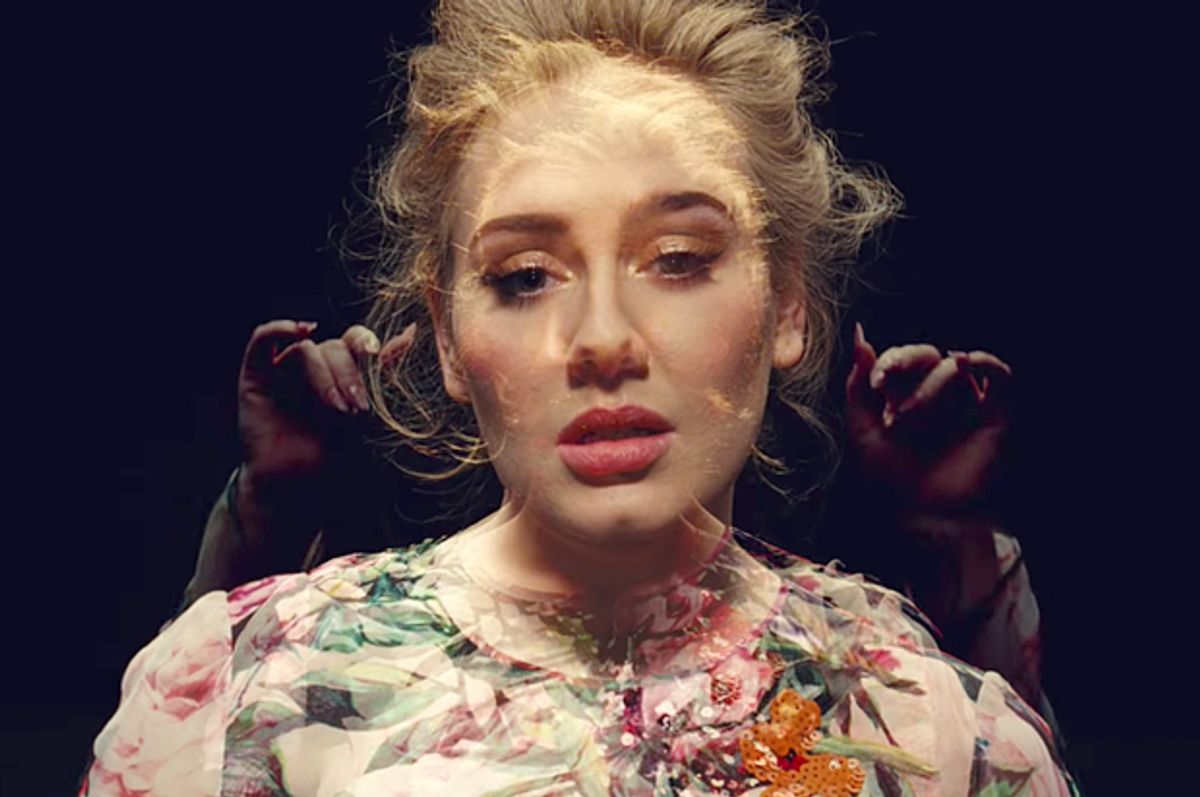 Adele didn’t need to show up to steal the show at this year’s Billboard Music Awards. The acclaimed singer, currently on a world tour, delighted audience members at the event and those watching at home with the premiere of her new video, “Send My Love (To Your New Lover).”

The video features Adele in a stunning floral dress by Dolce and Gabbana set against an entirely black background as overlapping images of the singer dominate the viewer’s gaze. The kaleidoscopic visual effects mirror the ever-revolving feelings of confusion, frustration and eventual solace following the realization that a former partner is following through on promises and plans for the future with someone else.

“You told me you were ready for the big one / For the big jump / I’d be your last love everlasting / You and me / That was what you told me,” she croons.

It’s an unfortunately relatable situation. How many of us have been in a relationship and thought “this is it” because our partner assured us we’re the relationship for life, only later to abandon ship? The emotional and psychological effects are befuddling and insulting. How could they do this? How did they move on so easily? Like Adele in the video, it can make you feel as if you’re dancing alone in the dark.

Moving on after a relationship has ended is treacherous terrain — it’s damaging to move on too quickly (lingering feelings ought to be addressed) but the task becomes daunting if you wait too long. Often it’s said that men tend to move on quickly, much to the chagrin of women everywhere, and now there's data that supports this theory.

“Singles in America,” Match.com’s annual survey of the inner workings and behavior behind contemporary dating practices, suggests men actually do get over breakups more quickly than women.

The survey polled more than 5,000 men and women and found men take about a month to move on, or get back in the game, following a break up. Women, on the other hand, average about four months — maybe the ladies aren’t in any big rush to go through another rollercoaster romance.

The reasons men might move on so quickly range from compartmentalizing their feelings to willingly distracting themselves from processing the break up in an effort to ameliorate the situation.

Whatever the case may be, Adele’s new single has a very clear message: Good riddance.

It’s not uncommon to hear woebegone ballads questioning where love went wrong (think Taylor Swift’s “Back to December”), loneliness and envy after seeing an old love with a new one (Robyn’s “Dancing On My Own,”) or power anthems announcing independence once someone has finally moved on (hi, Kelly Clarkson’s “Since U Been Gone.”)

“Send My Love (To Your New Lover),” however, is a grand departure — Adele isn’t desperately pleading for the love to be returned, nor is she scorned. It’s a mature acknowledgement of grievances that culminates in forgiveness. The song is a powerful statement recognizing the narrator of the song will be fine without the former lover, and confers good will on the new relationship as if to say “not my circus, not my monkey.”

This lack of spite that borders on indifference is a refreshing reminder the world will continue to spin even without the person who was once the center of your universe. The pain, the ecstasy and the lover themselves are given up, and maybe in time potentially forgotten.