"Game Of Thrones" recap: The heartbreaking consequences of Bran's powers are finally revealed

This fascinating episode brings together unforgettable scenes of romance, horror, drama and even meta-comedy 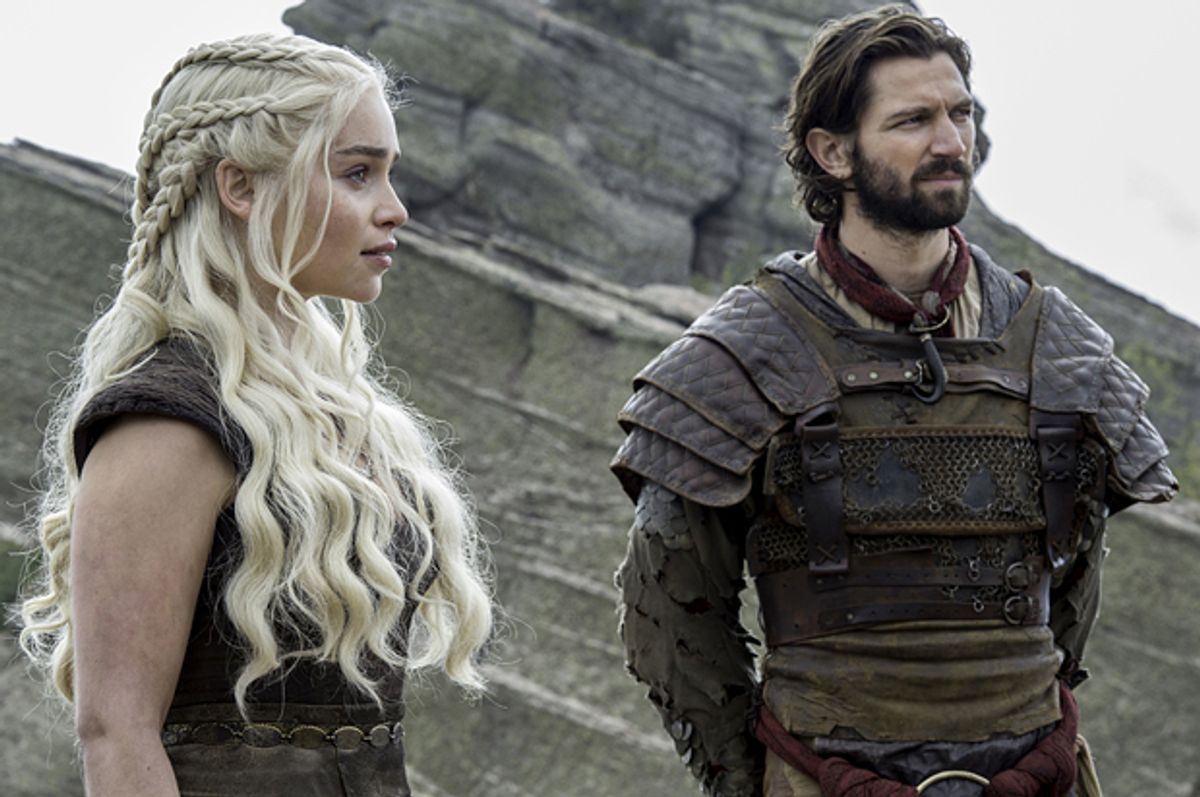 Emilia Clarke and Michiel Huisman in "Game of Thrones" (HBO)
--

“The Door” is one of the most lyrically written episodes of “Game Of Thrones” yet, from any season, with any content. A lot of episodes of “Game Of Thrones” are mostly just serviceable—the type of meat-and-potatoes storytelling that moves characters to the places they need to be, or brings certain pieces of information to the foreground at the most appropriate moments.

“The Door” is different. It is full of scenes that are written with aesthetic intention and vision—scenes that exist not just to be gotten through but also to be looked at, listened to, and experienced. The episode is not just episode five of the sixth season, it is also a collection of arresting moments. This episode does not just have one stunningly directed moment, or one unforgettable shot; it has numerous, one right after the other.

It’s a good episode, maybe even a great one, but it is also a perplexing one. As moving as all of showrunners’ David Benioff and D.B. Weiss’ storytelling is—the pair wrote tonight’s episode, which often signifies that the episode is one of some importance—the unforgettable scenes seem to be drawn from completely different genres. Dany and Jorah are in a romance; Bran, Meera, the Three-eyed Raven and poor old Hodor are in a horror film; Theon, Yara, and Euron are in a moving sefaring drama, possibly directed by Jane Campion; and Arya is in a Shakespearean meta-comedy, a la “Rosencrantz And Guildenstern Are Dead.”

These are all absolutely fantastic little moments (the play alone!), but it is amazing how they are not just topically different but tonally, wildly erratic. The direction for each of these mini-episodes is completely different. Just look at the incredible disparity between the scenes in Pyke and the scenes beyond the Wall. The power struggle in Pyke involves a long voiceover of a closely shot religious ritual, overlaid with unexplained scenes of our heroes setting out with great purpose on a series of ships. There is a sense of sweeping expanse, over the ships, and also one of careful attention to the meaning and power of ritual. The direction manages to convey what is so windswept and lonely about Pyke, and also what is so galvanizing about it for its residents; Ramin Djawadi’s soundtrack opts for a slightly nostalgic melody that seems to be partly a call to arms and partly a hymn for the new king. Above all, what’s interesting is that it plays out with the dynamic rising action of a montage, when so much of “Game Of Thrones” is just long conversations between two people in a dimly lit room about grand things beyond their control.

In contrast with this, the scenes beyond the Wall, in the cave lair of the Three-Eyed Raven, has an almost letter-perfect execution of the climax of a horror film, with Meera yelling and yelling at Bran to wake up and take action, or they’re about to be slaughtered. The most immediate analogue that came to mind is Trinity attempting to wake Neo up in the finale of “The Matrix.” But there’s also a strong callback to the type of approaching horde scenes in “The Fellowship Of The Ring,” for example, with multiple monstrous bad guys after them and sudden magical powers of light and/or fire cutting through the masses. And any veteran viewer of any action movie would recognize the group being slowly cut down by the enemy invaders, with each character getting their own moment of both sadness and redemption. These scenes are using two completely different cinematic vocabularies, and that could be said for nearly every other scene in the episode.

And it is both fascinating and exciting and totally confusing. The episode felt more like an intriguing anthology than a single story, even with the heartbreaking ending that revealed, subtly, what happened to poor Hodor many years ago. That’s somewhat satisfying—all of these characters are very different, and that the variety of their experiences in the show could be reflected in things like tone and cinematography is really interesting. But on the other hand, this is season six, and we’ve never seen something quite like this before. The method is laudable, but I didn’t feel that “The Door” earned quite all of its narrative punches. The trade-off, with aesthetic experimentation, is finding a way to maintain the emotional throughline. Iain Glen telling anyone he loves them is thrilling, but this was an episode with quite a few surprising hairpin turns, and it wasn’t always possible for me to stay with the narrative enough to feel what the episode appeared to want me to feel.

But “The Door”’s experimentation did work when it most needed to. The exception to this critique is Hodor’s death, which not only delivers a fitting send-off to such a stalwart, pathetic character but also along the way introduces a chilling consequence to Bran’s greensight—the power to trap a mind in the moment of its own death, well before that death is actually going to happen. A few seasons ago, when Bran warged into Hodor’s brain out of desperation, there was a sense that some horrible line had been crossed; “The Door” puts Hodor’s plight into historic perspective. It is fitting that there are major drawbacks to the power of greensight. It is also bone-chilling that Bran’s fate has been tied to Hodor’s since before Bran fled Winterfell, or fell from that tower, or even before he was born; the boy once named Wylis barely even stood a chance against the far more powerful forces of history and magic. Westeros is a beautiful place, but a cruel one too—sometimes in ways that are less about violence and torture and more about the quiet indignities of living a world that is beyond your control.

And that is, ultimately, the foundational theme of “Game Of Thrones”—that living in the world of the Andals would be a horrifying journey of the unknown and the misunderstood, from mere political history to the workings of the numerous rival gods and their fanatical subjects. The main reason “The Door” succeeds is because of the number of times it returns to that sense of universal confusion in a terrifying world: Varys challenging the new red priestess, Sansa questioning Littlefinger’s opaque motives, Arya remembering watching her own father’s beheading—helpless then and now—and even regal Dany realizing her champion is dying of something terminal. The tones and methods the show is using to tell its story are more diverse than ever, but “The Door” reminds the audience that the fundamental concerns of the show are still intact.