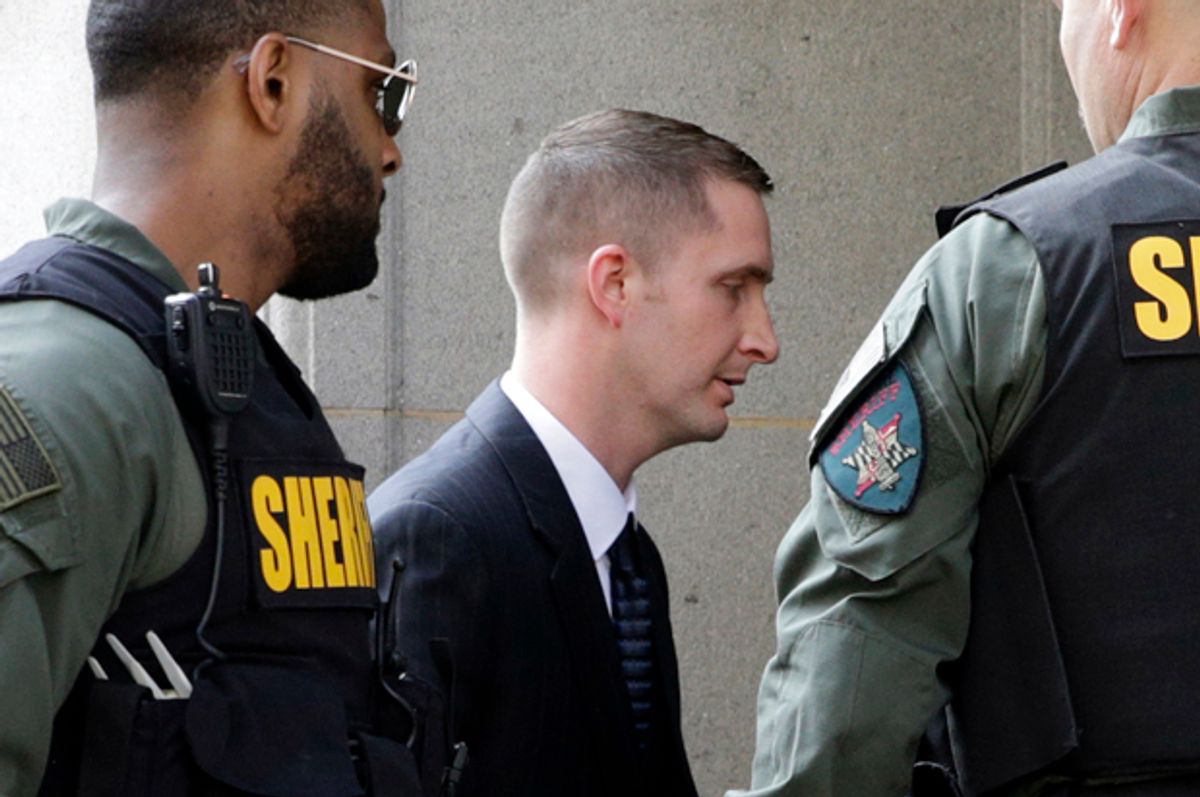 Edward Nero arrives at a courthouse to receive a verdict in his trial in Baltimore, May 23, 2016. (AP/Patrick Semansky)
--

So far, Baltimore State’s Attorney controversial strategy to aggressively go after nearly every officer involved in the death of Freddie Gray in 2015 is not proving successful.

On Monday, the second Baltimore police officer to stand trial for Gray's April 2015 was found not guilty of all charges in a bench trail. This follows a hung jury and declaration of a mistrial for another Baltimore office in December.

The 30-year-old Nero was charged with four misdemeanors, including facing a maximum prison sentence for second-degree assault of 10 years, up to five years for reckless endangerment, and two counts of misconduct in office.

Circuit Judge Barry G. Williams, not a jury of his peers, announced his verdict after a week-long trial.

“Officer Nero knew what the risks were to put him in a wagon unrestrained,” Baltimore Deputy State’s Attorney Janice Bledsoe said during closing arguments on Thursday. “He could be thrown around the wagon like a pinball, just going back and forth, back and forth.”

More on the trail from the Wall Street Journal:

Testimony during Mr. Nero’s weeklong trial centered on events prior to Mr. Gray’s van ride. Prosecutors and Mr. Nero’s lawyers jousted over whether Mr. Nero acted as a reasonable officer would during the officers’ chase and arrest of Mr. Gray. Prosecutors said Mr. Nero then endangered Mr. Gray by failing to seat-belt him in a police van, despite the issuance days earlier of a new police department policy mandating seat-belting.

Mr. Nero’s lawyers countered that another officer, Garrett Miller, handcuffed Mr. Gray and that Mr. Nero touched him only to help him sit up and look for an asthma inhaler. Still, defense lawyers said police had a right to cuff Mr. Gray after he ran from officers in a West Baltimore area known for drug dealing. Police charged him with illegally possessing a knife found inside his pants.

Mr. Nero’s lawyers said prosecutors had no evidence Mr. Nero read an email laying out the new seat-belt policy, and they said van drivers are responsible for detainees’ safety. According to trial testimony, Mr. Nero helped another officer place Mr. Gray—by then handcuffed and in leg irons—face down on the van floor.

Prosecutors initially charged Mr. Nero with false imprisonment, claiming the knife Mr. Gray had was legal under state law. They later abandoned the charge and the knife wasn’t mentioned during the trial.

Maryland Democrats have since introduced legislation outlawing so-called "nickel rides" or "rough rides," forcing every jurisdiction in the state to install seat belts in police vehicles, put helmets on prisoners, mandate video recording inside vans and make it a crime not to seek medical help for any detainee.

The city of Baltimore has paid out tens of millions to victims of these violent police rides in recent years. The Baltimore Sun describes one such typical "rough ride":

The most sensational case in Baltimore involved Johnson, a 43-year-old plumber who was arrested for public urination. He was handcuffed and placed in a transport van in good health. He emerged a quadriplegic.

Before he died, he complained to his doctor that he was not buckled into his seat when the police van "made a sharp turn," sending him "face first" into the interior of the van, court records state. He was "violently thrown around the back of the vehicle as [police officers] drove in an aggressive fashion, taking turns so as to injure [Johnson] who was helplessly cuffed," the lawsuit stated.

Johnson, who suffered a fractured neck, died two weeks later of pneumonia caused by his paralysis. His family sued, and a jury agreed that three officers were negligent in the way they treated Johnson. The initial $7.4 million award, however, was eventually reduced to $219,000 by Maryland's Court of Special Appeals because state law caps such payouts.