"People talk like that about the enemy": Sebastian Junger explains how America's divisive discourse is harming returning veterans with PTSD

The "Tribe" author tells MSNBC that PTSD is a disorder caused by a divided society, not "damaged" veterans 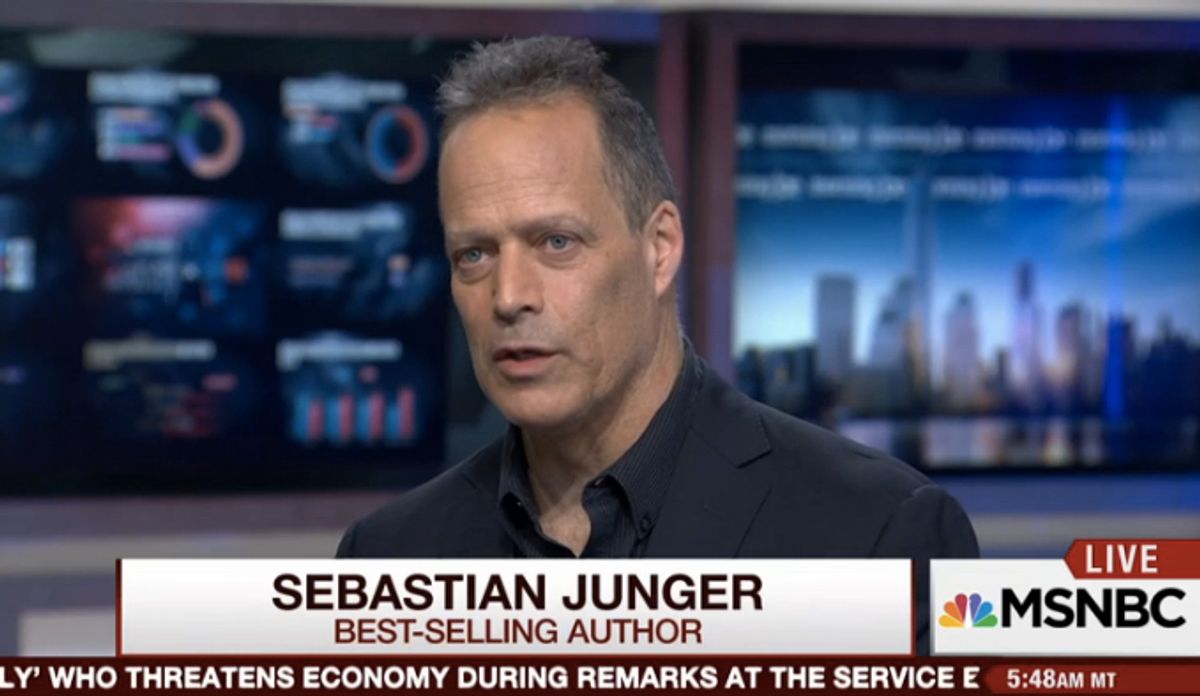 Junger, who formally retired five years ago, is out with a new book, "Tribe: On Homecoming and Belonging,” that explores how a divided American society contributes to returning veterans' mental health issues.

“PTSD is a disorder of transition,” he recently told the Wall Street Journal.

On Tuesday, Junger appeared on MSNBC's "Morning Joe," where he essentially laid the blame for high rates of mental health issues among returning veterans on politicians and media figures who have built a career out of divisive rhetoric.

Noting that murder and suicide rates in New York City actually went down after September 11, 2001, even for veterans, and citing his graduate work on Navajo reservations and the low rates of PTSD in Israeli society, where all able-bodied adults are conscripted into the military, Junger argued that close-knit communities can absorb wide scale trauma well.

"A wealthy modern society is a blessing in so many, many ways," Junger began. "The one down side, is that it allows for a lack of cohesion and then you see a rise in mental health issues."

"Modern society has some of the highest rates of depression," Junger noted. "As wealth goes up, suicide goes up -- they should be going the opposite direction and they don't and that is because we have lost cohesion."

When former George W. Bush White House staffer Nicole Wallace asked Junger why the plight of returning veterans, for all of the bipartisan consensus on their deservedness, has been unable to "sustain a national conversation," the seasoned war journalist gave a response so honest it evoked an audible "wow" from the Republican commentator.

"To sustain a national conversation we have to see ourselves as a unity," Junger said. "We don't."

"Literally," Junger confirmed. "As if they are rivals who actively want to hurt the country. They talk about they president that way, they talk about members of Congress, elements of the population, as if they are actually trying to harm their own country."

"When you talk like that," Junger explained, "you are talking non-tribally."

"When you use that about people inside your own camp, you are dividing a society," Junger argued. "And interestingly, it is a very deeply unpatriotic thing to do."

"If that is the norm," Junger said, returning to Wallace's initial question, "if that is acceptable to voters, to have people talk like that, you are never going to have a national conversation about anything."