The insanity of Sam Brownback's Kansas: Anti-choicers who brought you "baby parts" are now worried about animal-human hybrids 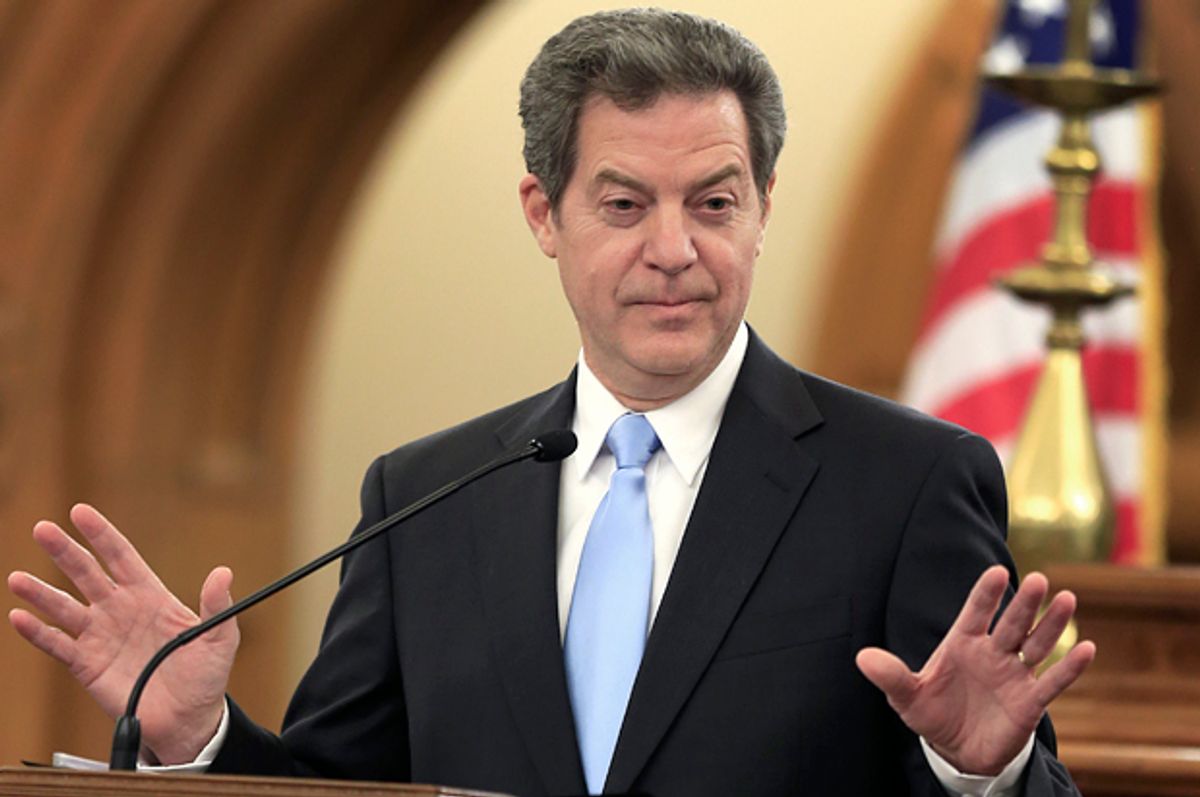 In the next month or so, the Supreme Court is set to rule, once again, on the legality of efforts from the Christian right to restrict access to abortion. The law in question, Texas's HB2, uses a bunch of medically unnecessary regulations in order to make it too expensive or logistically onerous to provide safe abortion care in the state. So it's as good a time as any to be reminded of the beliefs and concerns of the people that have successfully pressured state politicians to restrict abortion access.

Kansans For Life (KFL), the biggest anti-choice group in Kansas, bills itself as "a nonprofit educational organization". This month, their political action committee sent a questionnaire out to legislative candidates in the state, asking about a variety of issues of interest to their members.

No joke: One of the questions asked was whether the candidates oppose the creation of animal-human hybrids, which KFL calls "chimeras". Or at least the laboratory creation of such things, since, as people who oppose abortion, they have to support carrying any pregnancy to term conceived in bestiality. (Which doesn't actually happen, but we are dealing with people who believe all sorts of fantastical things, so this clarification is necessary.)

You fancy city liberals who probably read science magazines like a bunch of nerds are probably laughing at KFL right now, but they ain't sorry.

"It’s been a concern for over 10 years," Kathy Ostrowski, KFL's legislative director, told the Kansas City Star. "We’re not inventing this. This is not crazy stuff."

Personally, I'm more worried about the threat of a race of cyborgs rising up to kill us all. Has Ostrowski seen "The Terminator", much less "Terminator 2"? Unstoppable robots from the future bearing down on us with an immoveable will to kill is way more scary than the idea of people with cat tails, if you're just making up random stuff that isn't going to happen to be afraid of.

It's important to remember that KFL is not some minor organization in Kansas, but the biggest anti-choice organization in a strongly anti-choice state. This is the same state that elected an extremist fundamentalist like Sam Brownback to office, after all. This kind of inanity runs deep there.

While it's easy to laugh off this bizarre fear that people are going to become werewolves and werebears, it's worth remembering that the anti-choice movement has had smashing success mainstreaming some of their other delusions. For instance, this particular headline on KFL's main website:

The belief that Planned Parenthood is secretly running a black market in "baby parts" has as much validity as the fear that people are going to start getting cat ears implanted on their heads.

(Though you do have to wonder what's it to them if people do elect to get cat ears implanted on their heads. But then again, these are people who try to control when and how strangers have sex, so of course they think they have a right to control your bodily choices in a hypothetical future where we can elect to get animal parts attached to our bodies.)

The only difference between the "baby body parts" hysteria and the human-animal hybrid hysteria is that the former bunch of right wing nonsense has been adopted wholesale by the Republican party, whose politicians all cynically pretend to believe that this is a real problem in order to demonize Planned Parenthood.

There's just no real political value to hyping false concerns about human-animal hybrids. But lying about Planned Parenthood does serve a purpose: It creates a cover story for attacks on women's access to contraception and abortion. If pretending they were worried about animal-human hybrids had any political usefulness when it came to undermining women's rights, we're probably be seeing Fox News segments about this mythical threat and we would have heard hand-wringing about the animal-human mutants during the GOP debates this year.

Do right wingers truly believe their own nonsense? It's probably a mixed bag, with some nuts actually believing this stuff and some cynical politicians knowingly lying about this for political gain. But most, I  believe, fall into this weird gray area between belief and non-belief, where the desire to believe it is so strong that they can't even be bothered to ask themselves if it is true or not. Questions about empirical reality are, instead, pointedly ignored.

The blogger Fred Clark, who used to be involved in conservative Christianity before leaving to become a progressive Christian, wrote about this non-belief belief phenomenon in 2008. In this post, he recounts how, when he was still in the right wing church, he kept encountering people who claimed to believe that Proctor & Gamble, the soap company, was somehow involved with the Satanic church, a rumor that flourished in the 80s and continues on in various forms to this day.

Clark would confront people spreading this story, pointing out both that the facts were against them and that the story was so preposterous it deserved to be dismissed out of hand. What he found, inevitably, was that when he informed people that "the 23rd largest corporation in America was not in league with the Devil", they weren't relieved, as people who were legitimately worried about such a thing would be upon hearing it wasn't true. Instead, they would get "defensive and very, very angry."

He was forced to conclude that the people spreading this story didn't really believe it. They just got a kick out of spreading malicious tales that they knew, on some level, were false. The pleasure came from "contrasting themselves with baby-killing Satan-worshippers". Taking a stand against these imaginary villains helped them feel good and self-righteous, especially in light of nagging doubts that their intolerant political views might suggest they aren't the good people they believe themselves to be.

A similar thing is going on with the brave stand against animal-human hybrids or imaginary black markets in "baby parts". Railing against these imaginary evils makes anti-choicers feel self-righteous and good about themselves, and it's a nice distraction from the ugly reality, which is that they are are the bad guys here, in their roles as the people who work to make it harder for women to get the medical care they need.