Hillary's vulnerability has become increasingly clear; she must raise support from Bernie backers, not their ire 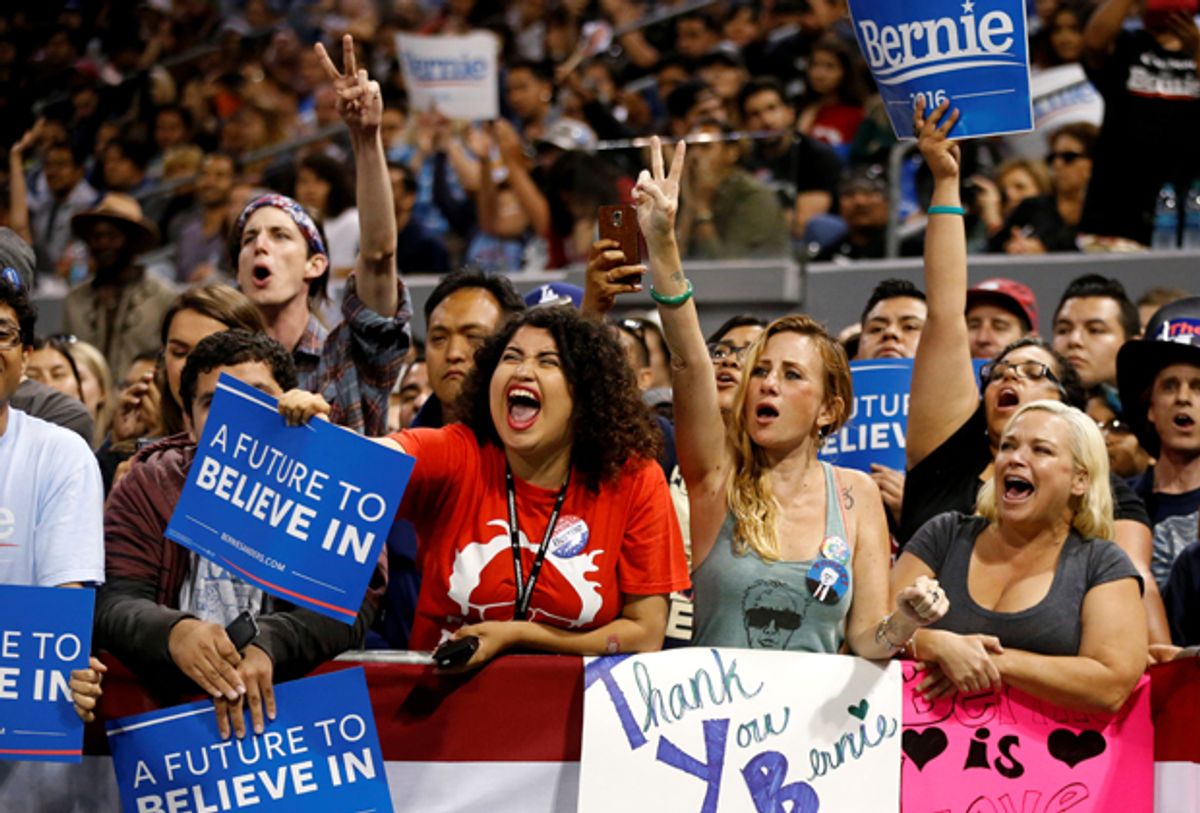 As spineless Republicans continue to fall in line behind Donald Trump, national polls between him and the likely Democratic nominee Hillary Clinton continue to narrow, sparking concern among Democrats who were celebrating the billionaire’s nomination not too long ago. According to HuffPost pollster, which tracks all major polling results, Clinton and Trump are nearly tied nationally — with the former leading by a paltry 1.6 points on average.

This is a big drop for Clinton, who led Trump by over 10 points on average throughout March and April. As the weeks have passed and the possibility of a contested Republican convention has vanished, Clinton’s lead has steadily declined, and two of the most recent polls from Fox and Rasmussen even had Trump leading the former secretary of state by a few points. Moreover, a Quinnipiac poll from last week had Trump and Clinton virtually tied in several swing states.

Suddenly, all of the GOP obituaries that appeared shortly after Trump locked up the nomination now seem rash and premature, to say the least (this doesn’t mean that the GOP is not in trouble, but Democrats may want to put off celebrating as long as Republicans control the majority of state legislatures and governorships).

Many in the commentariat have long assumed that Clinton would romp Trump in the general (just as they predicted Trump would implode many months ago), which seems to be an entirely reasonable forecast at first, considering Trump has the worst favorability ratings of any presidential candidate in modern history and has alienated entire ethnic groups with his divisive rhetoric (not to mention women). Donald Trump should suffer a huge defeat in November, and only a comparably weak candidate would give the billionaire a feasible shot at winning. Unfortunately, Hillary Clinton is a comparably weak candidate.

Trump may have the worst favorability ratings in modern history, but Clinton has the second worst (in a recent poll — albeit from Fox News — Clinton surpassed Trump in negative ratings). And the leading Democrat is almost as disliked and distrusted as Trump, a man who regularly lies about his net worth, changes his political positions like the weather in New York, and slams companies for outsourcing to China when his own company does the same.

Is this distrust warranted? Clinton probably deserves a bit more trust than the bullshitter himself, but otherwise, it’s hard not to be skeptical of the politician. She has a history of flip-flopping on key issues, has close ties to Wall Street and corporate America, has refused to release transcripts of high-paid speeches for banks like Goldman Sachs, and there have been some very shady dealings at her and Bill’s non-profit, the Clinton Foundation (the FBI investigation into her emails hasn’t helped either — even if it turns out to be innocuous).

Clintonites have reacted predictably to her drop in the polls by blaming Bernie Sanders. The senator has been called a “zombie candidate,” and he has been compared to Ralph Nader (an absurd comparison, but partisan Democrats can’t help themselves).

Meanwhile, Leslie Lee III, creator of the popular #BernieMadeMeWhite hashtag, pointed out in Jacobin Magazine back in March, the Democratic primaries have been more about young versus old voters than anything else — and according to a recent Gallup survey, black millennials (aged 20-36) have an even higher favorable opinion of Sanders than white millennials.

Meanwhile, the Clinton camp and the Democratic establishment have seemingly decided that their best bet at unifying the party is to take the despicable actions of a few individuals (and by despicable I don’t mean booing Democratic leaders or being impolite, but making threats or using violence, even though the apparent  “violence” that erupted in Nevada recently was largely manufactured by the media) to generalize about an entire popular movement.

Establishment figures have accused Sanders supporters of having a “penchant for violence” (ironically, a famous Clinton supporter was arrested for physically attacking a female Sanders supporter this week), and have even claimed that Sanders himself is inciting violence. Sanders has repeatedly condemned any and all violence, and has never — absolutely never — given the impression that violence is acceptable. Of course, this fact is of little importance to Democratic leaders who want to crush Sanders movement; as Daniel Denvir writes  in Salon:

“Conflating an entire protest movement with the actions of a few is a longstanding delegitimization strategy, and protestors always look more agitated than whoever they are protesting: the establishment, after all, exercises its power from a position of power. In the current primary, the establishment has deployed this strategy ever since the first bad person who happens to support Sanders found out about Twitter.”

Even as Democratic leaders vilify Sanders supporters and Clintonites accuse the senator of spoiling everything for Hillary, the majority of Democrats have concluded that Sanders’ continued presence in the primaries is not hurting the party, according to a Gallup poll. And for those who want the Democratic party to truly embrace progressive ideals, the Sanders campaign can only help the party.

Clinton’s political vulnerability has become increasingly clear with each passing week, and in the next six months, Trump will make Sanders look like Pope Francis. Last week, Nate Silver argued that Sanders supporters will be “key to Clinton’s general election success,” particularly because of his appeal among independents. With this in mind — along with Clinton's declining poll numbers — it may not be the wisest strategy to marginalize the millions of voters who are currently feeling the Bern.