"A matter of conscience": Stephen King, Junot Díaz and hundreds of other authors sign anti-Trump letter 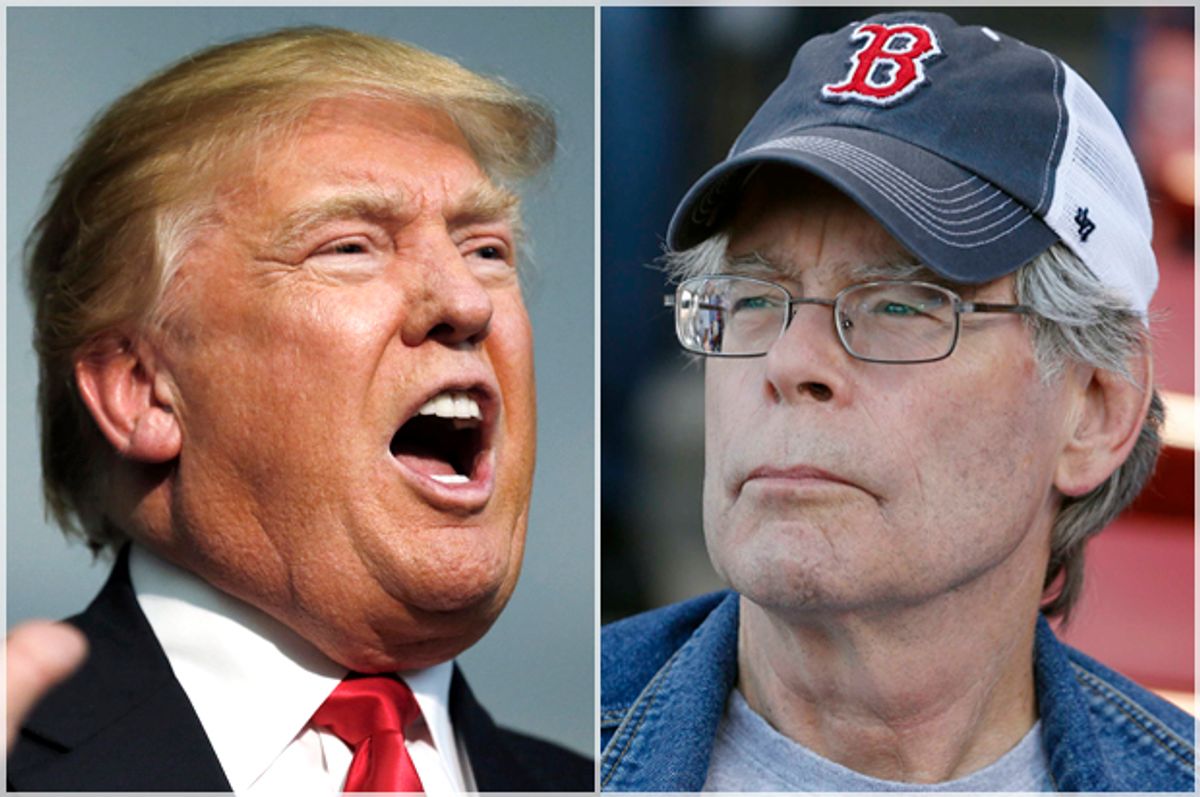 Hundreds of writers, including such high-profile names as Stephen King, Amy Tan and Dave Eggers, have signed onto an open letter publicly declaring their opposition to Donald Trump's presidential candidacy.

The letter, addressed "to the American people" and published Tuesday, states that the authors stand, "as a matter of conscience," against Trump, "a political candidate who deliberately appeals to the basest and most violent elements in society."

"As writers, we are particularly aware of the many ways that language can be abused in the name of power," the letter states. "We believe that any democracy worthy of the name rests on pluralism, welcomes principled disagreement, and achieves consensus through reasoned debate."

Trump's rise, the letter continues, "demands, from each of us, an immediate and forceful response."

The letter has garnered support from writers across the literary spectrum, including "Wild" author Cheryl Strayed; former U.S. Poet Laureate Rita Dove; and Pulitzer Prize-winners Junot Díaz, Jennifer Egan, Jane Smiley and Michael Chabon. Signatory Stephen King has been an outspoken critic of Trump throughout the election cycle, having once referred to the presumptive Republican presidential nominee as a "rabid coyote."

The letter, spearheaded by authors Andrew Altschul and Mark Slouka, attracted the support of over 450 writers before it launched as a public petition on Tuesday. As of Thursday afternoon, it had received over 17,000 signatures.

"Considering that writers, as a group, are an ornery, independent-minded bunch, to get almost 500 of them to sign on to a single statement is pretty extraordinary," Slouka told Salon via email. "I think it says a great deal about Donald Trump and the fear he’s inspired."

The effort has been met with some snark from critics viewing the letter as futile or vain, illustrated by headlines like "Big-Name Writers Sign Petition Condemning Trump and Swiftly Ending His Candidacy" and "Donald Trump Is Underwater With the All-Important ‘Writers of Literary Fiction’ Demographic."

Slouka's message to the naysayers: "We need your help, not your cynicism or your exhaustion or your utopian dreams. We need your help because, cliché though it is, we’re all in this together, and once the political climate starts to change, it can get very real, very quick. "

"My parents both witnessed the rise of fascism in Europe (my father was with the Czech underground)," Slouka explained. "The lesson their experience taught me was the importance of doing something, anything; if nothing else, going on record."

Though he's wary of sounding sentimental in his praise for fellow writers (whose ranks, he notes, include "the usual percentage of cowards and quislings and liars"), Slouka does think that his profession can offer a unique and valuable perspective on Trump.

"Writers spend their days dealing with language, with how it reveals and conceals the truth," wrote Slouka. "Which makes us the canaries in the political coal mine. On some level, this is our great function. Don’t ask us to build bridges or fix the economy, but when the air starts getting toxic, when the Big Lie is getting its legs, we’ll recognize it and call it what it is."