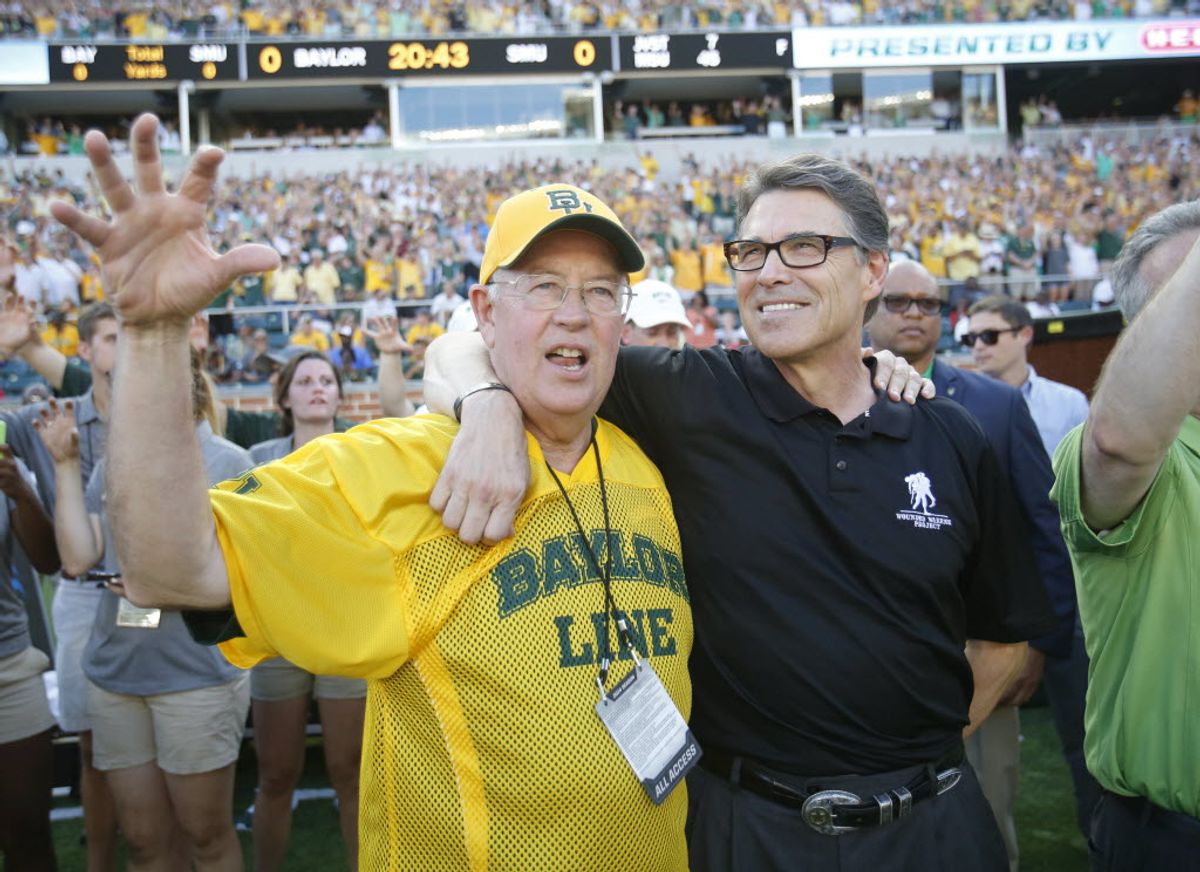 Just as the never-quite-dead Whitewater scandal is being forced into national political discourse again by Donald Trump, the former special prosecutor who spent three years chasing the right-wing ghost before become infamous for his dogged investigation into former president Bill Clinton's sexual improprieties in the White House is now caught up in a sex scandal of his own -- accused of all things, failing to vigorously investigate allegations of sexual impropriety.

After an independent investigation of widespread allegations of campus sexual assault, Baylor University president Ken Starr has been demoted by the University's board of regents on Thursday.

A report released on Thursday found that under Starr's leadership, Baylor failed “to identify and train responsible employees under Title IX” --  a federal law meant to protect female students. The damming 13-page report cited a “lack of strong institutional management and control on a number of levels.”

The law firm Pepper Hamilton interviewed more than 65 current and former employees and students over a nine month investigation that included a review of school records and emails and found that Starr's leadership was a “fundamental failure.”

While Baylor's football has seen success on the field during his nine season tenure, the report found that coach Briles allegedly operated “an internal system of discipline,” completely separate from the university’s own protocols for dealing with campus sexual assault:

Football staff conducted their own untrained internal inquiries, outside of policy, which improperly discredited complainants and denied them the right to a fair, impartial and informed investigation, interim measures or processes promised under University policy

While the report made no mention of specific past or present Baylor football players, it did allege that in several instances, “football coaches or staff met directly with a complainant and/or a parent of a complainant and did not report the misconduct.” SBNation has further details on Baylor's systemic cover-up of campus sexual assault:

Baylor's positive momentum came to an abrupt and sudden halt with the scandal associated with Sam Ukwuachu. The former Boise State defensive end transferred to Baylor and was charged with sexual assault of a soccer player at the university before ever playing a game for the team. The football program didn't quickly come forward about the story.

Ukwuachu was eventually found guilty of the charges, but Briles insisted that he never would have accepted the transfer from Boise State if he were aware of the circumstances that led the Broncos to dismiss the defensive end. Chris Petersen and Briles had a back-and-forth shortly thereafter in which Petersen said he "thoroughly apprised Coach Briles of the circumstances," while Briles insisted he was only told that Ukwuachu was depressed and had some team-related issues.

However, Ukwuachu's legal problems were only the tip of the iceberg in Waco. A January 2016 Outside the Lines report detailed several instances where the school failed to appropriately investigate alleged sexual assaults involving members of the football team. Later, Shawn Oakman, who transferred to the program from Penn State after being dismissed for grabbing a woman's wrist while attempting to steal a sandwich in 2012,was the subject of a sexual assault investigation.

In May, another Outside the Lines investigation uncovered a multitude of violence allegations against members of Briles' team and an extraordinary effort from Waco police to keep those accusations from the public.

Coach Briles was fired on Thursday along with several unnamed administrative and athletics department staffers, according to a press release from the University.

For his part, Starr avoided the harshest of penalties, staying on as the Chancellor and serving as a professor at Baylor's law school.