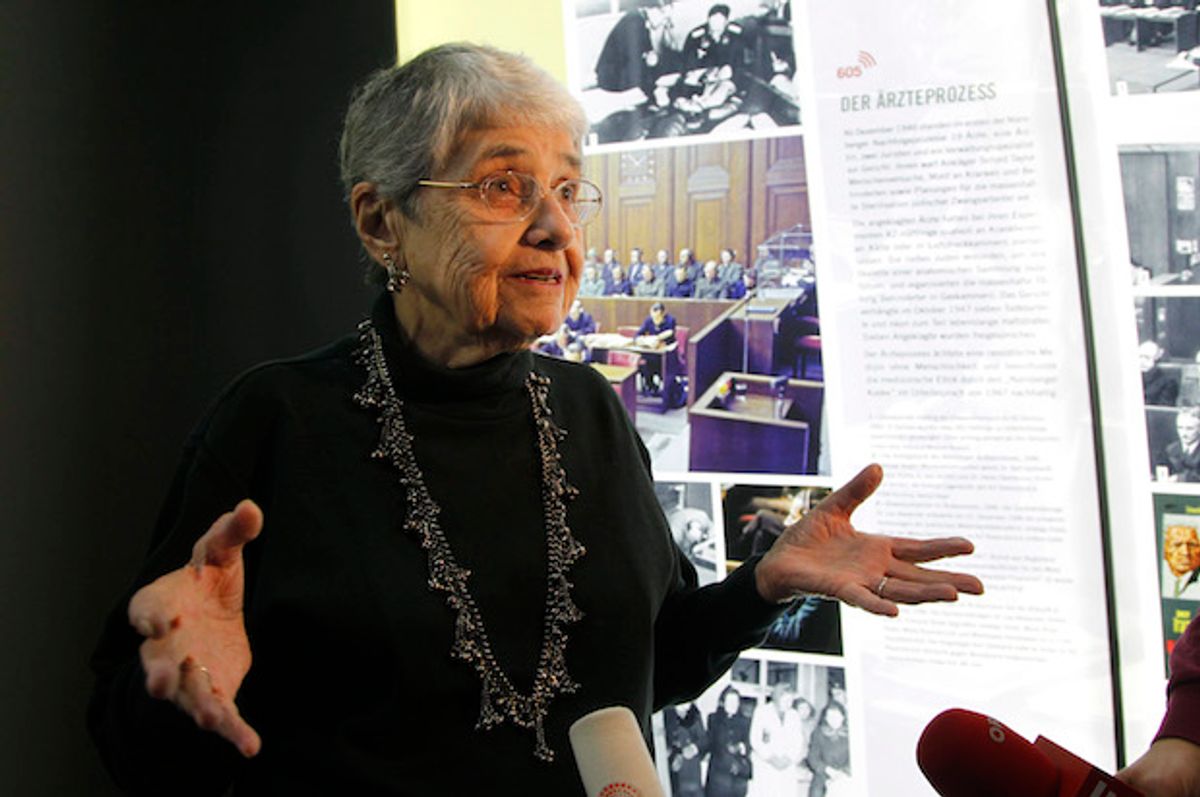 Hedy Epstein in the Nuremberg's Palace of Justice on November 20, 2010 (Reuters/Michaela Rehle)
--

At age 90, Hedy Epstein was still getting arrested in activist movements.

In August 2014, the nonagenarian Holocaust survivor was detained by St. Louis police at a civil disobedience action in support of Michael Brown, an unarmed black teen who was killed by a white police officer.

Epstein, who died of illness in her home in St. Louis on Thursday, at age 91, was an outspoken supporter of the Black Lives Matter civil rights movement, which was launched in the wake of Brown's death.

She was also an economic justice advocate, as well as a longtime anti-war activist who staunchly opposed the U.S. war in Vietnam and the illegal invasion of Iraq.

Epstein, was however, most well-known for her outspoken support for Palestinian rights.

For more than a decade, Epstein tirelessly advocated on behalf of the Palestinians, who have lived under illegal Israeli military occupation for almost 50 years.

Palestinians "are in a prison, they are prisoners," Epstein explained in a 2007 interview. "My participation is a small contribution that I can make compared to the sufferings that the Palestinians endure every single day."

She called on the U.S. government, which gives more than $3 in unconditional military aid to Israel every year, to stop funding Israel, and to instead fund social programs and help the poor.

Epstein had first-hand experience of extreme oppression and discrimination. She was born into a Jewish family in Germany in 1924. She came of age during the rise of Nazism, and only survived thanks to the Kindertransport child rescue program.

In 1939, Epstein managed to flee to England. Her family was not as fortunate. Both of her parents and her extended family members were killed in Nazi concentration camps. She was their only child.

Epstein would later aid Allied forces in the Nuremberg trials, the military tribunals that tried the Nazis for war crimes and crimes against humanity, establishing the international legal framework the world has today. She also later became a member of the St. Louis Holocaust Museum.

Although Epstein was a longtime activist, she did not begin engaging in Israel-Palestine piece work until the 1980s.

She first visited Israel in 1981, and recalled being immediately struck by the racism she saw: "We were taken on a sightseeing tour, and the people on the bus would ask: 'Who lives in this area?' 'These are Jewish people.' 'Oh, it is beautiful, the gardens are beautiful. Who lives over here?' 'These are Palestinians.' 'Oh, it stinks, it smells, it’s terrible, it’s dirty.'"

"This disturbed me, this kind of discrimination and talk against the Palestinians that they didn’t even know," Epstein said. It "left a very bad taste in my mouth."

Her "personal wake-up call," however, were the Israel-backed Sabra and Shatila massacre. Israel invaded south Lebanon in 1982. With the support of the U.S., it subsequently waged a war in alliance with far-right, Phalangist Christian militias.

In September 1982, Israeli-backed Phalangist militias slaughtered thousands of civilians in Sabra and Shatila, Beirut refugee camps largely inhabited by Palestinians who were expelled by Zionist militias in the war that established Israel in 1948.

Renowned scholar Noam Chomsky called it "a horrifying massacre," comparing it to the anti-Jewish pogroms that took place in Czarist Russia.

After the Sabra and Shatila massacre, Epstein began to research Israeli history. "When I was learning, I realized that I hadn’t paid attention to what was going on with Israel," she recalled in the 2007 interview. "And the more I learned and the more I understood, the more I became disturbed by what the Israeli government was doing, and doing in my name."

"The more I learned, the more I began to speak out publicly against the policies and practices of the Israeli government vis-à-vis the Palestinian people," Epstein said.

In 2003, she was inspired to visit Palestine for the first time. She would return to Palestine almost every year after, health permitting.

"It’s gotten worse every time I return," Epstein recalled in 2007. "The way they are now, they remind me of when animals are rounded up and taken to slaughter, it’s just so humiliating."

Epstein said she faced harassment from Israeli authorities over her peace work. In Israel's Ben Gurion Airport in 2004, on her way back from a visit to the occupied Palestinian territories, Epstein said she was called a "terrorist" and labeled a "security risk." In retaliation for her peaceful, pro-Palestinian activism, she was stripped and forced to endure a cavity search.

"Peaceful non-violent resistance, the Israelis consider to be terrorism," Epstein explained. "And yet, what they do in response to peaceful non-violent resistance is the true terrorism, because they shoot tear gas at us. They use what they call rubber bullets — but it’s not a rubber bullet; it’s metal with a very thin coating of rubber around it and can kill you. They also use live ammunition and water cannons."

Epstein also was the target of backlash from pro-Israel groups in the U.S., where she lived from 1948 until her death. In a speech at Stanford University in 2004, Epstein faced so much aggression from Israel supporters that two public safety officers were called to stand next to her.

"When I stood next to that terrible wall that Israel has built, separating Palestinian from Palestinian, I thought, 'My God, this is what Jews are doing, the Jews that one time were forced behind walls, they are building a wall, and putting Palestinians behind that wall, and in the process destroying buildings, homes, wells and hope,'" she added.

An obituary for Epstein noted that "she ended every talk with three requests: remember the past, don’t hate, and don’t be a bystander."