"Game of Thrones" recap: Is power still a shadow on the wall, or does it come from standing in the light? 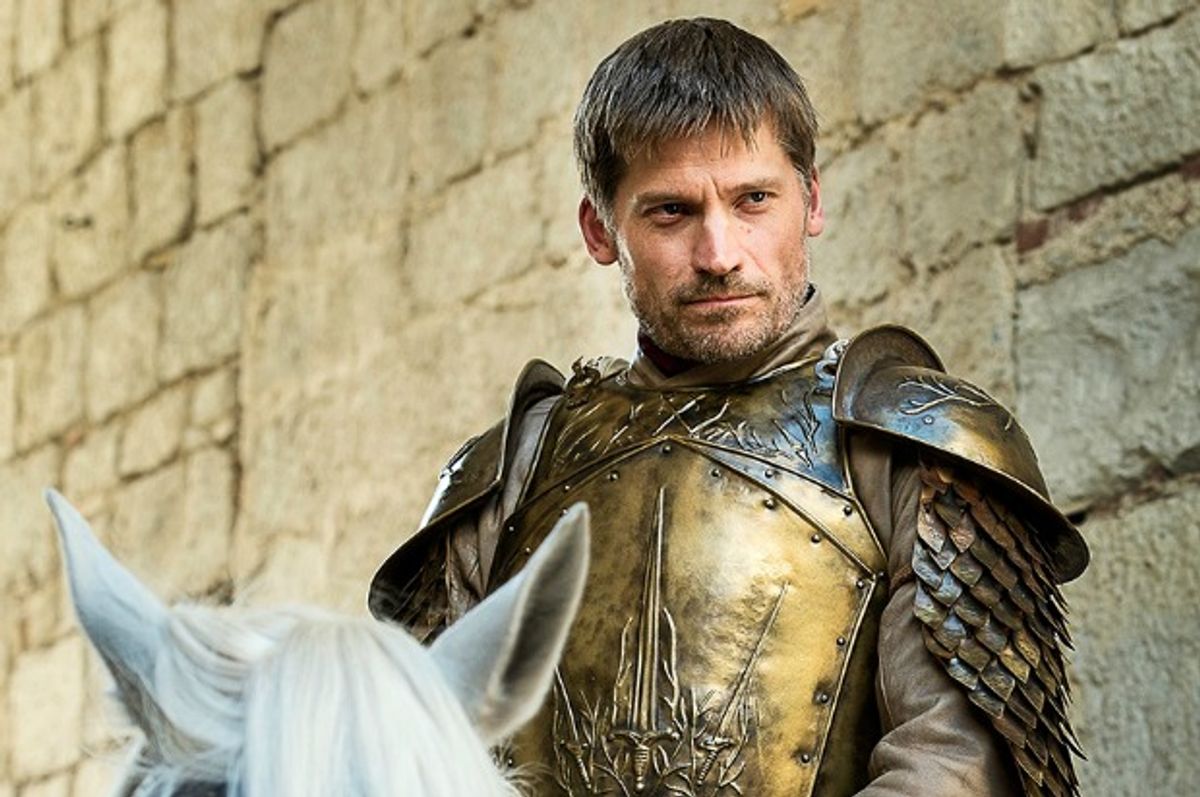 Nikola Coster-Waldau as Jaime Lannister in "Game of Thrones" (HBO)
--

“Game of Thrones” has become so ripe with spectacle that even people who have never seen the show can—like those who may not speak a language fluently, but understand a few key phrases when spoken to—follow a basic watercooler conversation: They know of Daenerys Targaryen riding away on her dragon’s back and Cersei’s walk of shame; they’ve seen images of Jon Snow bleeding to death in the arctic night, and so many GIFs of his resurrection. These are the big money moments; the gong strikes that summon everyone to the discussion table. When done well, they can be cathartically devastating, and inspire new depths of sentiment for familiar characters.

And yet some of the show’s most complex, thematically instructive scenes are the smaller ones. Before Varys and Tyrion were in Meereen, they sat across from each other at a table in King’s Landing, and Varys told the then-Hand of the King a riddle about power as an illusion, a shadow on the wall. This story, this image of power as a malleable force, able to take the shape of whoever stands in the light at any moment, has been a kind of narrative blueprint for the series as a whole—although one could make the argument that, as the show has gotten larger, it has forgotten that there is great merit to nuance, and that subtler machinations can be more interesting (and terrifying) than a dragon’s roar. That’s why “Blood of My Blood” is, for the most part, a refreshing change of course; it relies on the good old-fashioned technique of characters making choices to advance the plot and reinforce the themes.

This week, the longest shadow cast starts at the bare feet of Margaery Tyrell, who more than earns the moniker I bestowed upon her in an essay published last week: “the biggest bad-ass in Westeros.” When we last saw Margaery, she was consoling her brother and fellow prisoner, Loras, whose spirit has fractured under torture and deprivation; she reminds him that he is the great hope of their house, but when she looks up, her eyes burn with determination—and we see that steeliness melted down and forged in a master plan. To save herself from a walk of atonement (and likely broker better treatment for her brother), she deploys the full arsenal of her charms to persuade the High Sparrow that she has embraced the faith and will make a convert of her husband.

Anyone who doubts that Margaery’s performance on the stairs of the sept is just that, a performance, has but to study Natalie Dormer’s face, which plays a symphony of expressions as the Lannister and Tyrell armies approach—there is surprise, but also regret (as Twitter user Future Super-Villain puts it, “yall should have text me you had a plan so I wouldn’t have brainwashed this little idiot”), and genuine sadness at her grandmother’s disappointed face. And yet, there is that quicksilver brightness in her eyes, the ghost of a smirk, when she takes Tommen’s hand in hers and raises their arms up: She has finally wrested him from Cersei’s grip. (I will concede, however, that if Margaery has indeed succumbed to Stockholm Syndrome, then this aspect of her development was rather hastily pasted together).

That confrontation at the sept is a perfect exemplar of how power is conveyed on the show. Jaime Lannister charges up the stairs on his white stallion to liberate his son’s bride and avenge his sister—but the big battle is avoided because, in this instance, the show privileges a different kind of victory: Margaery has outmaneuvered the High Sparrow (no, really, I promise), and out-Cersei’d Cersei. And this more interior victory is infinitely more interesting (if less immediately satisfying) than another righteous bloodbath, because it doesn’t just raise the stakes; it broadens our dialogue about the show far beyond “Hell yes!” or “God no!”

The episode’s opening deftly balances the expansive and the intimate: Meera drags Bran until she collapses under the blunt physical burden of it; Bran, newly empowered as the three-eyed Raven, summons a mysterious rider who dispatches the Walkers. Many people are likely couch-jumping excited to see that this rider (referred to as Coldhands in the novels) is the long-lost Uncle Benjen Stark (and kudos to the make-up and FX department for his subtle, if startling, half-undead look), a victim of the Walkers whose body and soul were saved by the Children of the Forest before he could fully turn—but what gives these parts of the episode their importance is the family connection between the characters, although anyone playing a Stark family reunion drinking game is still safe from dying of alcohol poisoning. Bran and Benjen may occupy a liminal space between the earthly and the fantastical, however, they are united in memories of family and humanity.

Arya Stark’s choice about what sort of power she wants is also ultimately rooted in her memories of who she was before she became No One: the tomboy whose brothers teased her for her stubbornness, who got her sense of ethics from her father (along with a touch of that stubbornness). She returns to watch the troupe of mummers, and her intended target, Lady Crane, an actress so talented that she can move Arya even while portraying the woman at the very top of her death list. Lady Crane is the envy of the younger actress who puts the hit on her, believing that simply removing an obstacle—and not, say, further cultivating her talent—is the only way to advance (her mouthing Cersei’s lines from the wings was both comical and chilling). Initially, Arya poisons Lady Crane’s rum—but then Lady Crane catches her backstage, and thinking she’s just a village girl wanting a glimpse of the bohemian life, tries to speak with her in earnest.

Maisie Williams makes Arya’s sudden choice to slap the poisoned cup out of Lady Crane’s hands wholly believable, just as she sells us on Arya’s desire to have the power that her mentor, Jaqen H’gar holds — to be the silent, impassive killer. Only she can’t be. Her shadow will never change shape along the wall. She will always be the girl who recited that kill list as a lullaby every night. As Arya listens to the actress talk of changing costumes and personas, she sees the esoteric inscrutability of the cult of the Faceless Men as another kind of performance, and a hollow one at that. She chooses not to put another face on the wall; instead, she pulls her beloved Needle from its hiding space and sits ready, poised to strike at whatever awaits her.

Perhaps for Arya, and for Samwell Tarly as well, power resides not in how long a shadow you cast, but in the fact that you’re standing in the light itself. If anything, Sam’s homecoming is about stepping out of the shadows of his bitter, bigoted father and golden-boy younger brother. And were it not for talk of wildings and Valerian steel, most of this meet-the-family awkwardness could come straight from a Thanksgiving table in AnyTown, USA—from the fat-shaming to the xenophobic outbursts (the Tarly women, at least, seem lovely). Gilly’s spirited defense of Sam as “a greater warrior than either of you will ever be,” is so moving because these two characters feel so delightfully, so poignantly lived-in (proving that John Bradley and Hannah Murray are two of the most adroit actors on the show).

The fate of the realm may not hinge on Sam’s decision to come back for his woman, to take Heartsbane off the hearth and claim his pride after years of abuse, but goddamn, it feels good to watch, far better than Daenerys’ battle speech to the Dothraki atop her prodigal dragon. It’s easy to sound hard-core while riding a dragon; try doing it while sneaking out of your father’s house. I wish the show had ended on Samwell and Gilly, on the message that personal power will last far longer than anything wrought through a clash of swords or a breath of fire. A shadow can be as large as the wall itself, but at the end of the day, it is beholden to a tiny flame dancing on the wick of a candle, waiting for a stiff breeze to blow it out.