The most fearsome hawk of all: Donald Trump's careless, brutal plans for the U.S. puts the world in peril

The U.S. under Trump would be a rogue nation that is feared and dangerous — even to Americans 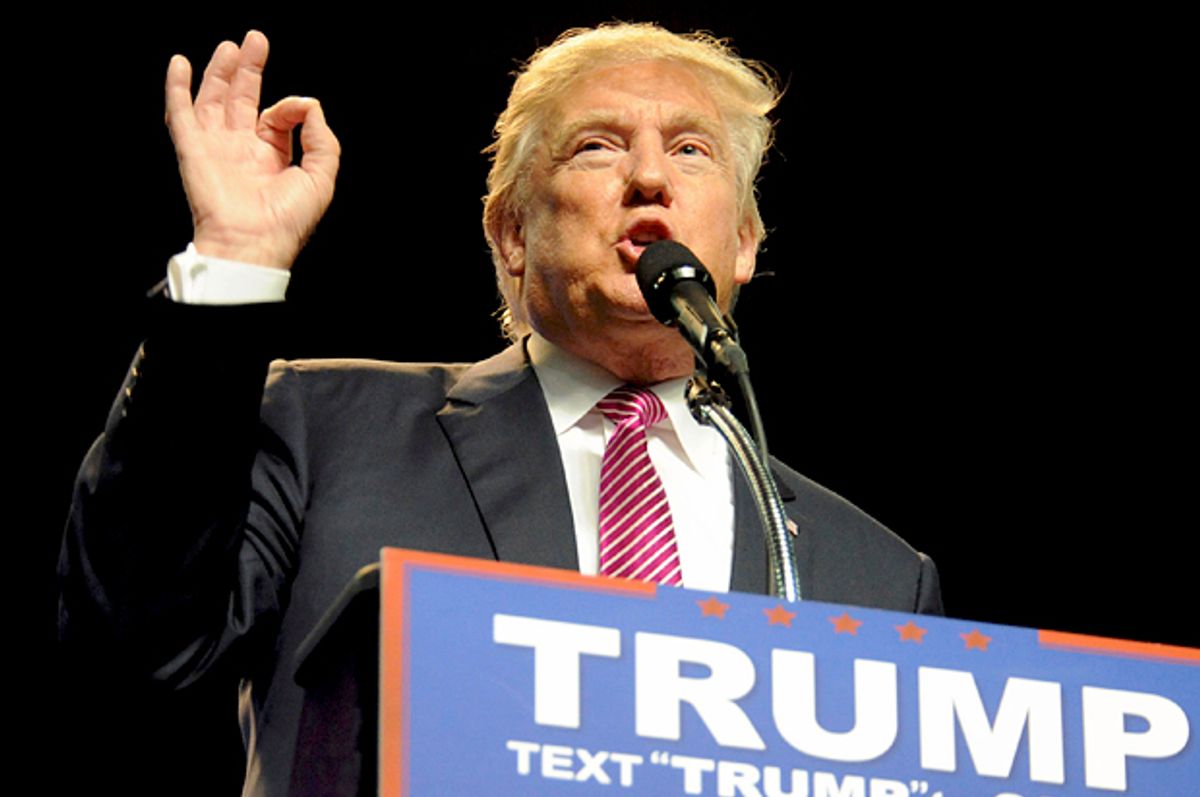 Over the Memorial Day weekend, Salon published an important piece by David Niose about Donald Trump's incipient fascism and what that reveals about American militarism. Let's just say that his success is not likely a sign that we are headed toward a new kinder, gentler foreign policy.

Trump's use of the term "America First" doesn't harken back to pre-WWII isolationism as many people want to believe. He himself undoubtedly had no idea that it had that meaning when he said it, he just knew he'd heard it before. What he meant is "America will be Number One" which isn't the same thing at all.

Let's take this idea that he's something of a peacenik. Sure, he claims he won't get involved in foreign entanglements the way the ultra-hawks of the Democratic Party, particularly warmongering Hillary Clinton allegedly wants to do, because he's going to be "smart" and "vigilant" and build up the military to such greatness that "nobody will ever mess with us" because they'll be afraid of their shadows. Apparently, he labors under the illusion that the only reason wars break out is because the rest of the world is insufficiently impressed with America's military might — which is odd since everyone knows the US is the world's only superpower with all that implies. It's unknown how he proposes to show the world the US Military is even more powerful than it already is but the traditional way to do it is to start a war. Perhaps he has a better idea. (A big rally showing off all the weaponry perhaps?)

Needless to say, that entire line is fatuous nonsense based upon his playground worldview in which America must strut around beating its chest and demanding "respect" from the rest of the world, which in his estimation (and that of his followers) has been sorely lacking for many decades.  Other countries are taking advantage of us economically because we don't have "strong" leaders who are willing to keep them in their places. And our allies are taking advantage of us militarily because they rely on our security umbrella and they are either going to have to pony up for the full cost or build up their own military, including building nuclear weapons.

He claims that he has been against all the wars that haven't led to unambiguous American victories and was for those that were which makes him a genius military strategist. The record, however, does not bear out his claims. For instance, the one that gives even liberals a little thrill up the leg,  is his insistence that he was against the Iraq invasion. He used it to good effect to troll Jeb Bush in the South Carolina primary and has made it the centerpiece of his case that he can foresee a good war from a bad war. It is not true. And while it is always nice to have a presidential candidate criticizing insane warmongering, Trump simply wants to have it both ways. If the war had gone well he would have been one of its biggest cheerleaders.

He likes to hit the current administration and Hillary Clinton over the head with the intervention in Libya, declaring that he was against it from the start. Again, he lies. Buzzfeed located one of his videos from 2011 in which he said this:

"Qaddafi in Libya is killing thousands of people, nobody knows how bad it is, and we’re sitting around. We should go in, we should stop this guy, which would be very easy and very quick. We could do it surgically, stop him from doing it, and save these lives."

That was precisely the rationale given by the government at the time. He was critical of the administration in real time however.  He felt they weren't being aggressive enough in raining ultra-violence down upon the Libyan people.  And his penchant for torture and other war crimes is well documented.  He is anything but a pacifist and his "isolationism" is a sham. But that doesn't mean he's George W. Bush or Dick Cheney either.

After 9/11, conservative firebrand Ann Coulter said a lot of crazy things including the infamous quote "we should invade their countries, kill their leaders and convert them to Christianity." But one of her other memorable lines was "why not go to war just for oil? We need oil."  She repeated it as recently as this March when she wrote this column devoted to calling Jeb Bush "retarded."

Saddam was a dangerous and disruptive force in a crucial oil-producing region of the world. We need oil. Why not go to war for oil?

Trump is a big fan of Coulter's and it's commonly assumed that he got much of his misinformation about Mexico sending all its "rapists and murderers" across the border from her most recent polemic called "Adios America: The Left’s Plan to Turn Our Country Into a Third World Hellhole". Their views on immigration track closely, including Trump's Muslim ban, although even he hasn't (yet) suggested that all immigration be halted as she has.

But they have something other than tremendous hostility to immigrants in common. Trump also believes America should "take" oil wherever it is around the world. Indeed, according to this article by Zack Beauchamp at Vox, this idea is at the very center of Trump's worldview. He finds numerous examples of Trump being very upfront about it, starting with this astonishing comment from 2011:

In the old days when you won a war, you won a war. You kept the country. [my emphasis]We go fight a war for 10 years, 12 years, lose thousands of people, spend $1.5 trillion, and then we hand the keys over to people that hate us on some council.

I still can’t believe we left Iraq without the oil.

And he believes that the US should go back into Iraq and "take" the oil now.  His very first campaign ad contained the promise:  “He’ll quickly cut the head off of ISIS and take their oil.”   He continues to say it on the stump all the time using some iteration of this line from last December when he said, “You take the oil. You know, to the victor belongs the spoils. You take the oil. You don’t just leave it."   Lately, he's taken to complaining about the fact that the administration isn't killing the oil truck drivers.

Beauchamp makes an interesting observation about where this confusion is coming from. Trump is an aggressive, militaristic, imperialist but it's not the kind we've seen in America in a very long time:

Trump's plan is to use American ground troops to forcibly seize the most valuable resource in two different sovereign countries. The word for that is colonialism.

Trump wants to wage war in the name of explicitly ransacking poorer countries for their natural resources — something that's far more militarily aggressive than anything Clinton has suggested.

This doesn't really track as "hawkishness" for most people, mostly because it's so outlandish. A policy of naked colonialism has been completely unacceptable in American public discourse for decades, so it seems hard to take Trump's proposals as seriously as, say, Clinton's support for intervening more forcefully in Syria.

Yet this is what Trump has been consistently advocating for for years. His position hasn't budged an inch, and he in fact appears to have doubled down on it during this campaign.

Beauchamp quotes  Walter Russell Mead who places Trump in the Jacksonian Tradition. He defines it as being:

[B]asically focused on the interests and reputation of the United States. They are skeptical of humanitarian interventions and wars to topple dictators, because those are idealistic quests removed from the interests of everyday Americans. But when American interests are in question, or failing to fight will make America look weak, Jacksonians are more aggressive than anyone...With them it is an instinct rather than an ideology — a culturally shaped set of beliefs and emotions rather than a set of ideas."

Mead points out that the Jacksonian tradition is notoriously associated with atrocities and overkill, due to the fact that they tend to act out of anger and believe in all out war to achieve their goals. This form of war fighting has been an integral part of American military policy as recently as Vietnam war which featured such figures as General Curtis LeMay who declared that we should "bomb them back into the stone age." But it's been a while since the bipartisan foreign policy consensus featured anyone with this particular philosophy.

When Trump evoked the names of Patton and MacArthur, as he does frequently on the campaign trail, this is what he's talking about. So is this horrifying apocryphal story about General "Blackjack" Pershing in the Philippines in the early years of the 20th century, which he commonly tells on the campaign trail, where it is met with huge cheers from his followers:

They were having terrorism problems, just like we do," Trump said, according to an account in the Washington Post. "And he caught 50 terrorists who did tremendous damage and killed many people. And he took the 50 terrorists, and he took 50 men and he dipped 50 bullets in pigs’ blood — you heard that, right? He took 50 bullets, and he dipped them in pigs’ blood. And he had his men load his rifles, and he lined up the 50 people, and they shot 49 of those people. And the 50th person, he said: You go back to your people, and you tell them what happened. And for 25 years, there wasn’t a problem. Okay? Twenty-five years, there wasn’t a problem."

That is a presidential candidate running for office endorsing gruesome war crimes. One can argue that all US presidents commit them, whether it's the "liberal interventionists" or the "neoconservative hawks" all of whom believe, at least in some respects, that they are either preventing something worse or subduing tyrants to promote democracy. Their record is mixed at best. But the sheer, brutality of what Donald Trump is proposing — the colonialism, the use of overwhelming force, the insistence that America is perceived as weak and disrespected and must show the world that it is No. 1  — is more dangerous than those more familiar hawks.

Under Trump, the world's most powerful nation becomes a rogue superpower to be universally mistrusted and feared. Trump thinks that's a good thing. Sane people understand that makes the world much less safe. And that includes America.