Amy Schumer's goddess body: This Instagram image will make you stand up and cheer 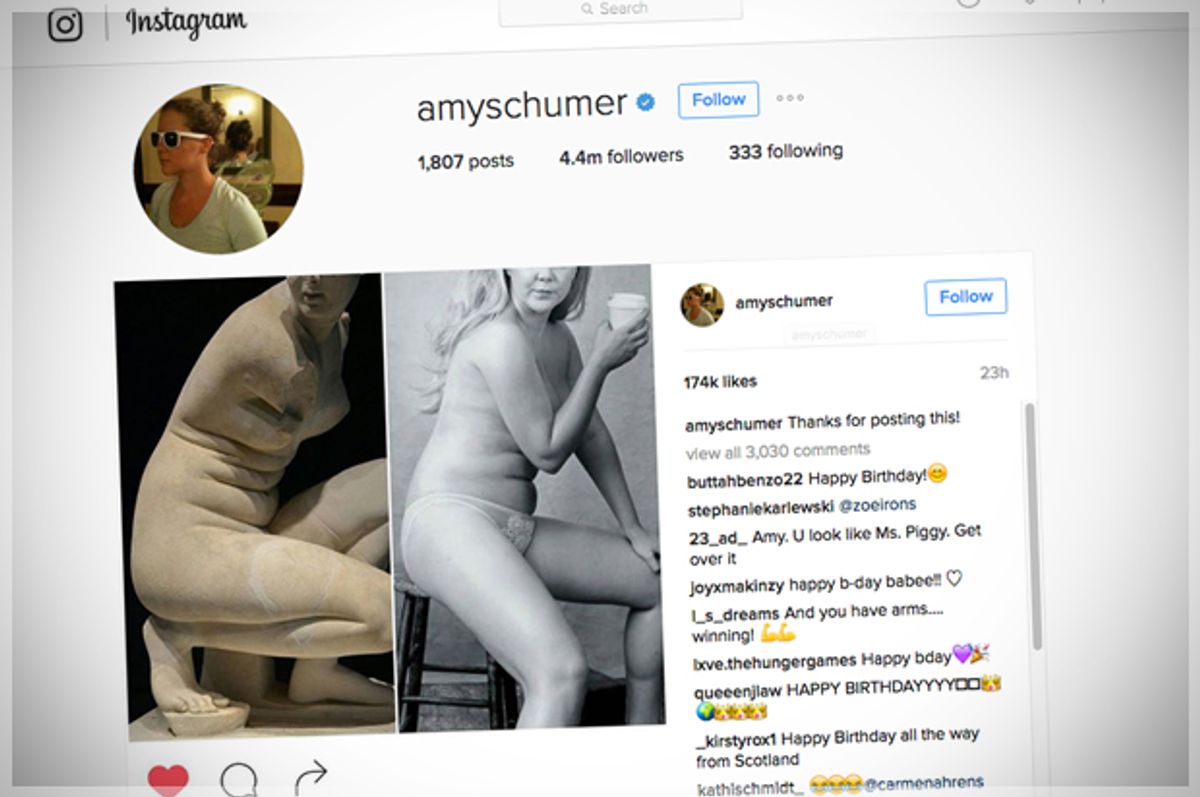 I cringe at some of the things my friends and I have done to make our bodies look a certain way. Calorie restriction (starvation), steam room sessions (a form of dehydration) and cryotherapy (literal freezing) are a few methods that come to mind, and for what? I really don’t know why, but since I was a girl it’s seemed that women are supposed to subject themselves to myriad forms of torture in order to be beautiful.

Society champions attractiveness in women, as evidenced by the media and science. A recent study confirmed that women who spend more time on grooming and basic beauty upkeep are not only perceived as more competent and attractive, but actually earn more than women who don’t wake up extra early to ensure their blow outs remain in tact. It’s a discouraging reality that our professional success can be affected for something as shallow as our levels of attractiveness. It’s no wonder so many teenage girls and women struggle with eating disorders and other mental illnesses such as body dysmorphic disorder. We’re socialized to believe our beauty (or lack of) determines our fate, and that our bodies ought to be taut, tan and hairless if we want to be worthy of love.

Fortunately, things seem to be slowly shifting away from this.

Yesterday, a college student at the University of West Georgia posted a photo on Instagram of a sculpture of Aphrodite alongside Amy Schumer’s nearly-nude photo for Vanity Fair shot by Annie Leibovitz. Aphrodite, the Greek goddess of love beauty and pleasure, is depicted with *gasp* skin rolls, as is Schumer. The caption embodies the body-positive messages Schumer has taken to encourage:

"So many women and young girls are shamed by the media and fashion industry for not having a flat stomach and not being a size zero, but look, the goddess of beauty is portrayed here with stomach rolls and doesn't have a perfectly smooth, toned body. I want to remind everyone that they do not have to be a Victoria's Secret model to be a beautiful goddess with a beautiful body. Your body is not bad, ugly, or wrong. Embrace your inner goddess."

The post received more than 23,000 likes, and Schumer herself reposted the image:

Thanks for posting this!

As knowledge of photography has become ubiquitous in the age of Instagram, it’s no big secret that many photos are edited in order to achieve a certain aesthetic. Models, stylists and photographers spend weeks planning and executing a shoot, and yet many still fail to realize the final image that’s circulated is a very different representation of the physical form it captures. Our bodies are ever-changing, and it’s important to know that even the “perfect” ones have a skin roll or four.

Case in point: fitness star Anna Victoria. The day before her wedding, she posted a pre-wedding body photo for her fans to admire the work she’s put into looking great before her big day. Two minutes — 120 seconds later — she posted a second photo, one of her sitting down, tummy rolls in full view. Her message was clear, we need to stop obsessing over the idea that our bodies can -- and should -- look a certain way from every angle all the time.

“You girls requested for me to share this after posting on snap last week Picture on the left was taken one day before the wedding and the picture on the right was taken... 2 minutes after! Someone recently said to me that we all have our good angles and we all have our bad angles, so why do we let our bad angles carry so much more weight than our good angles? If you focus on how bad you look in the bad angles, at least focus on how good you look in the good ones too!!”

It’s a positive and encouraging message for women like Anna Victoria and Amy Schumer to be championing. It’s not simply okay to have a body that doesn’t exactly correspond to certain beauty ideals — it’s divine.