Instagram apologizes after removing picture of plus-sized women in bikinis 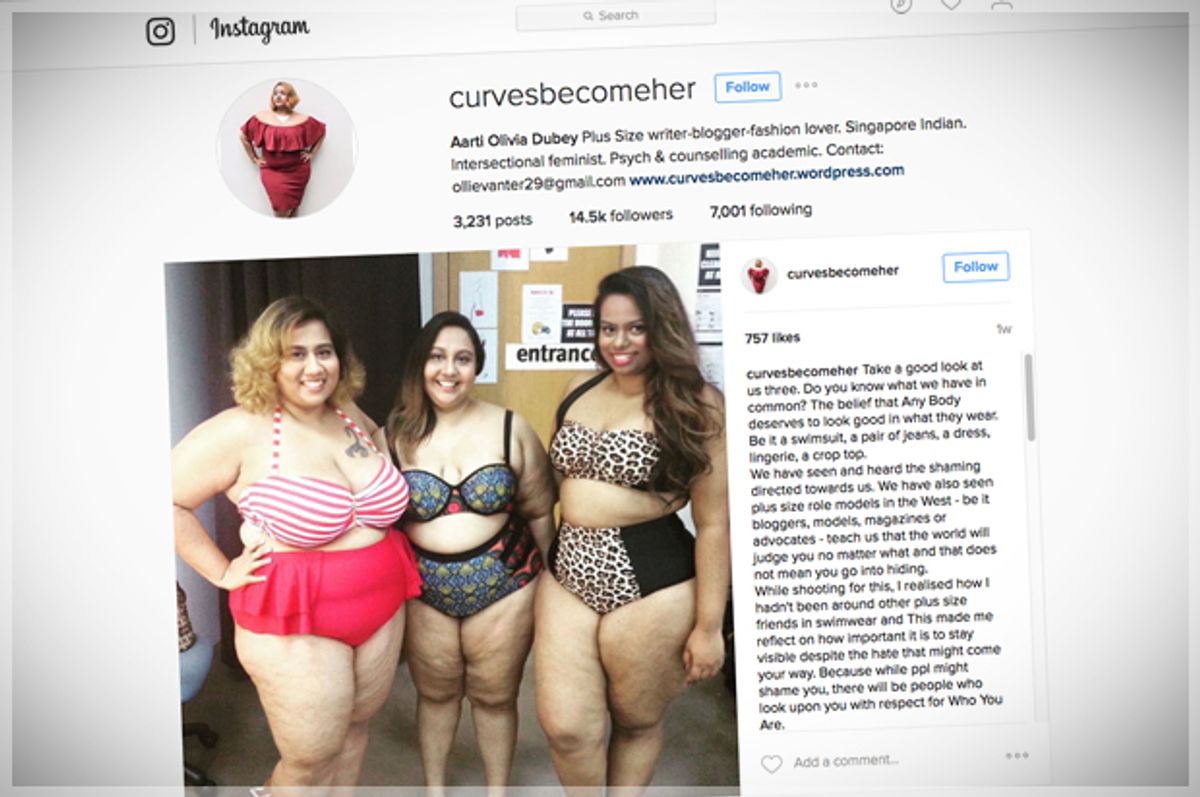 Instagram's found itself in a heap of shit after it mistakenly removed an innocuous (by any standards) image, posted by Singapore fashion blogger Aarti Olivia, of three plus-sized women in bikinis.

Take a good look at us three. Do you know what we have in common? The belief that Any Body deserves to look good in what they wear. Be it a swimsuit, a pair of jeans, a dress, lingerie, a crop top. We have seen and heard the shaming directed towards us. We have also seen plus size role models in the West - be it bloggers, models, magazines or advocates - teach us that the world will judge you no matter what and that does not mean you go into hiding. While shooting for this, I realised how I hadn't been around other plus size friends in swimwear and This made me reflect on how important it is to stay visible despite the hate that might come your way. Because while ppl might shame you, there will be people who look upon you with respect for Who You Are. Follow more body positive people online. Screen who follows you and who you choose to be inspired by or you can relate to. Surround yourself with that and you will see that: 1) you're definitely not alone in this and 2) you are not supposed to be at war with yourself all the time. And if few celebrate your personal triumphs, it is okay to feel sad but remember that That is not something you have control of. Take charge of what you Can control - your sense of self, your self respect and willingness to view the world with different perspectives. #plussize #southasian #igsg #fatshion #nobodyshame #losehatenotweight #fuckfatphobia #pizzasisters4lyfe #celebratemysize #bodypositive

The image was intended specifically to promote non-discriminatory body standards as part of an "every body is a bikini body" campaign, according to a Fusion report.

Alerted to their error, Instagram restored the photo and sent an apology email to Olivia.

"But the 'error' here is not the chance oversight that led Olivia’s bikini photo to be taken down," Brown opined. "The error is the standard hard-coded into minds of people reviewing those requests that certain expressions of the female body are lewd."

Instagram's parent company, Facebook, was already in a heap of shit last week, after the site accidentally banned an ad featuring a plus-sized model for not adhering to its "health and fitness" guidelines, which say, "Ads may not depict a state of health or body weight as being perfect or extremely undesirable."