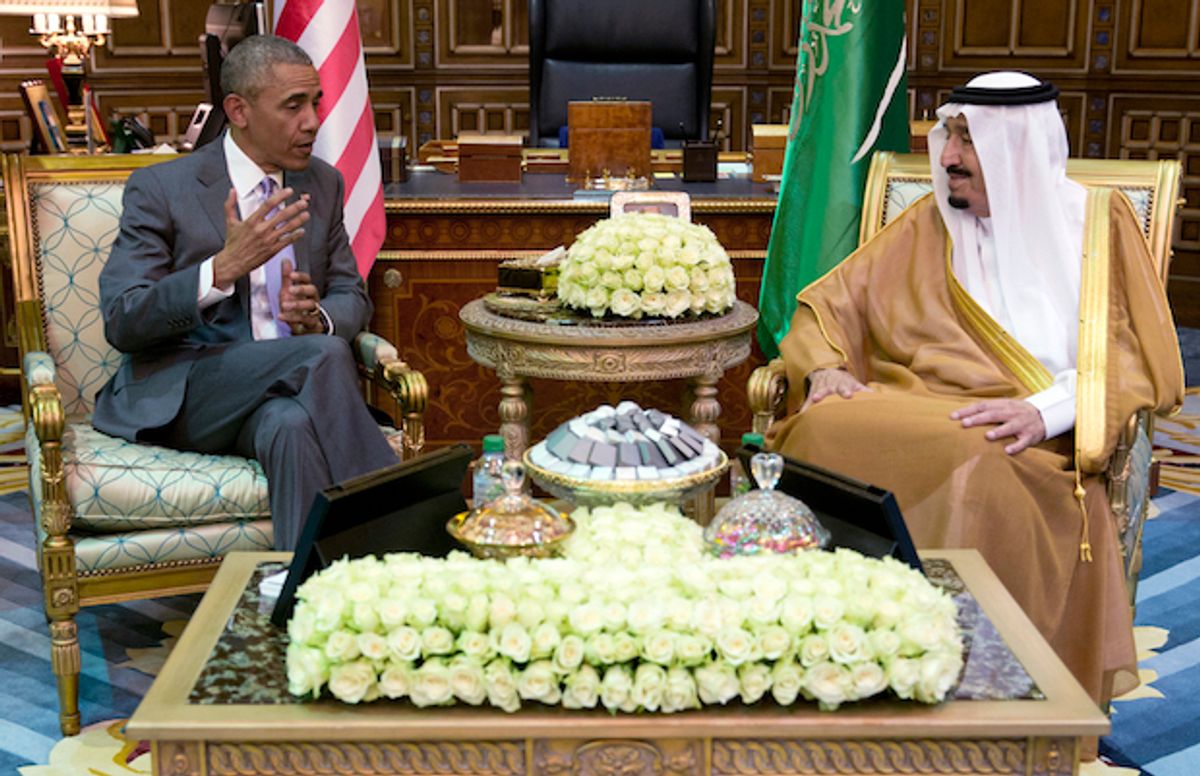 A so-called counter-terror court in close U.S. ally Saudi Arabia sentenced a human rights activist to eight years in prison for speaking about the regime's systematic use of torture, assassinations and enforced disappearances, and for calling for the right to peacefully protest.

Abdulaziz al-Shubaily was tried in the Saudi regime's Specialized Criminal Court this week and was sentenced under what Amnesty International calls a "repressive counter-terrorism law."

In November 2013, al-Shubaily was interrogated for his human rights work. He was questioned about statements he had signed defending the right to peaceful protest and phone conversations in which he discussed protests.

Less than a year later, in July 2014, al-Shubaily was charged with several crimes, including “inciting [people] to breach public order … by calling for demonstrations” and describing Saudi Arabia's political system as “a repressive police state.”

He was also charged with a crime for accusing Saudi security forces of “repression, torture, assassinations and enforced disappearances,” all regular practices that are well-documented by rights groups such as Amnesty International and Human Rights Watch.

In March 2015, the Saudi regime slapped yet another charge on al-Shubaily, accusing him of “committing the crime of communicating with foreign bodies and providing them with reports that contain many mistakes about the Kingdom.”

In addition to the eight years in prison, al-Shubaily faces an eight-year travel ban, during which time he is forbidden from writing on social media.

“It is both absurd and outrageous that communicating with an international human rights organization has been cited as a criminal, ‘terrorist’ offense," said James Lynch, deputy Middle East and North Africa director at Amnesty International.

"Abdulaziz al-Shubaily is blatantly being punished for courageously speaking out about rampant human rights violations in Saudi Arabia," Lynch added.

Al-Shubaily was the only remaining active founding member of the Saudi Civil and Political Rights Association, or ACPRA, one of the few rights groups in Saudi Arabia. Almost all of the other co-founders are already serving lengthy prison sentences. Now al-Shubaily, who served as a legal representative for nine of them, will join his colleagues behind bars.

"Abdulaziz al-Shubaily’s conviction is an attempt to put the final nail in ACPRA’s coffin," Lynch said. "The organization has borne the brunt of the authorities’ relentless attacks on civil society over the past few years. After shutting ACPRA down three years ago, the authorities have prosecuted and jailed its founding members one by one in a merciless bid to suppress criticism of Saudi Arabia’s appalling human rights record."

"The authorities have once again proven that they are determined to conceal the truth about Saudi Arabia’s dire human rights record," he continued. "The authorities must urgently ensure his conviction is quashed and they should not detain him."

Al-Shubaily’s story is one among myriad. In March, the Saudi regime sentenced prominent journalist Alaa Brinji to five years in prison for a series of tweets expressing support for human rights advocates and calling for the right of Saudi women to drive cars.

And these punishments are quite light compared to those Saudi Arabia often metes out to dissidents. The Saudi regime kicked off 2016 by killing 47 people in a series of mass executions on Jan. 2. Its preferred method of execution is beheading.

Among those killed was renowned activist Sheikh Nimr al-Nimr. Salon interviewed Mohammed al-Nimr, the son of the executed Saudi dissident, who shared his story about fighting for freedom and democracy in the oil-rich dictatorship.

At least three young Saudi activists who were arrested as teenagers are also slated to be beheaded, with one awaiting crucifixion as well.

Rep. Keith Ellison (D-Minnesota) has requested that the U.S. government pressure its ally Saudi Arabia to halt the pending executions of these three young men.

The U.S., which did more than $100 billion in arms deals with the Saudi regime from 2010 to 2015, calls it a “close ally.” U.S. government officials frequently visit the kingdom, which sits on the second-largest oil reserves in the world, and "reaffirm the enduring strength of the U.S.-Saudi bilateral relationship."

“The continuing silence of the international community over the relentless persecution of human rights activists in Saudi Arabia in the recent years is shameful,” Deputy Middle East and North Africa Director Lynch said.

“Saudi Arabia’s international allies must press the authorities to end this iron-fist clampdown on civil society, which absurdly is being carried out in the name of counter-terrorism. They should also publicly denounce the jailing and persecution of human rights defenders.”