4 ways the press can fight back against Trump: He's declared war against the media — they can't let him win

Donald Trump continues to get the upper hand with the media, here's how they can revolt against him 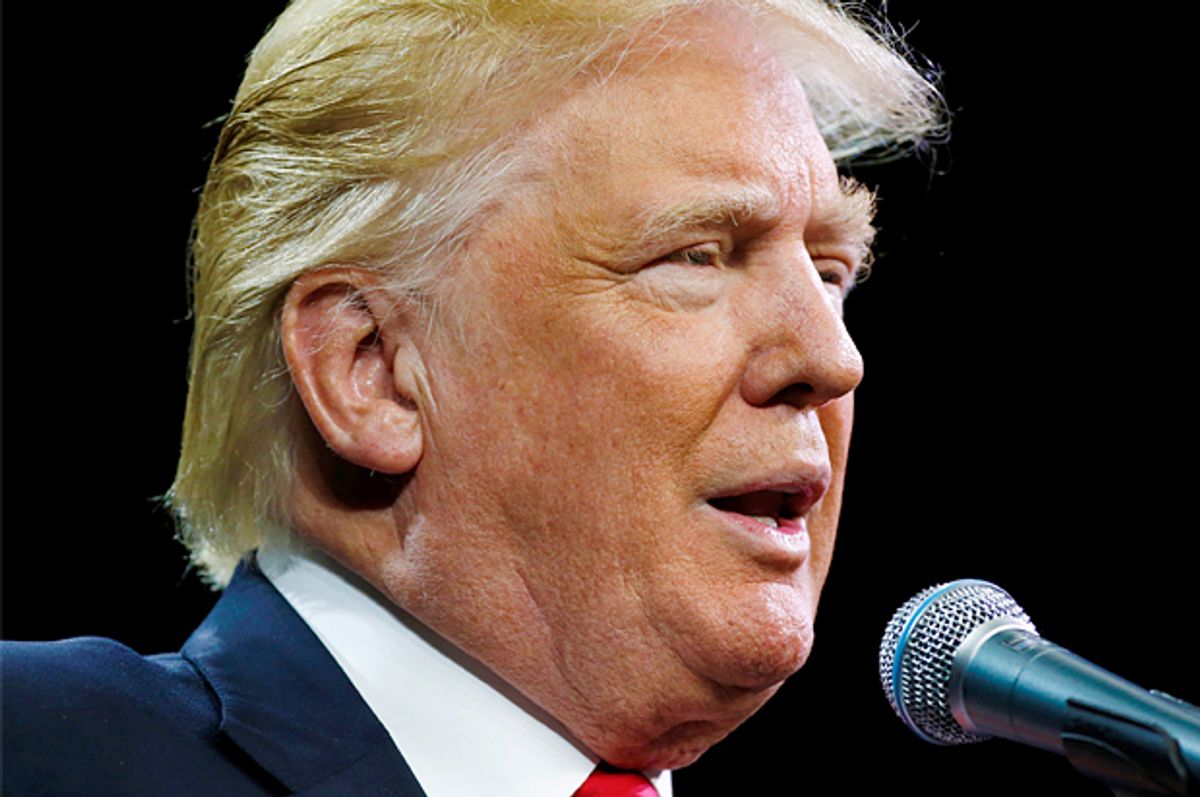 The 2016 election will be perhaps the U.S. news media's biggest test, and one which it will very likely fail. The chief topic of the test is, naturally, Donald Trump and his well-known brand of whiny-diaper-baby tantrums coupled with his fatuous bullying and packaged in obvious mendacity.

This week alone has so far represented a major chunk of the test. Trump remains ahead of the game while the news media continues to cover his trifecta of scandals — his shifty veterans donations, his Trump University lawsuits and his remarkable denial of the California drought — with the same superficial punditry generally reserved for traditional candidates playing a traditional political game. Anyone outside of the conservative entertainment complex is easily capable of observing Trump's crystal-clear decimation of facts, numbers and science. We can only assume the press does as well, and yet reporters and TV anchors alike continue to cover these events like they always do. They cringe a little more often in the face of Trump, yet their coverage continues to feature the same old tropes: the multi-box pundit debates without any resolution; the strained efforts at balance; the welcoming posture with regard to Trump's robotic surrogates and campaign spokespeople... all of it.

Regarding the latest Trump news, we know the following.

1) Trump clearly didn't donate $6 million to veterans groups back in January, as he had pledged. The Associated Press contacted the 41 groups Trump claimed to have supported, but found that half of those groups only received checks after May 24, when The Washington Post originally reported the story. While the journalism is unimpeachable (unless you're Trump), it just not enough. It's solid reporting, even though Trump is invulnerable to it. How? It's worth noting that during Trump's kangaroo presser, he accused an ABC News reporter of being "a sleaze." And then the story becomes how Trump called a guy "a sleaze," and suddenly Trump's brand is reinforced.

2) Trump University was quite obviously a money-making scam which successfully defrauded countless attendees. MSNBC's Lawrence O'Donnell dedicated numerous segments to this story, long before it gained traction elsewhere, yet today the most discussed angle has to do with the national origin of the presiding judge, Gonzalo Curiel. During one of Trump's incoherent whining jags this week (commonly referred to as a "Trump campaign rally"), he referred to Curiel as "Mexican" and a "hater." Curiel is from Indiana and is an American citizen.

3) California is absolutely plagued by an historic drought, based on both science and, you know, a clearly visible lack of water. This particular issue might be the least covered of the litter, but it probably shouldn't be. This is very likely the best illustration of how Trump is using common psychological tactics to influence his supporters, while distracting the press. Here, Trump is borrowing the Fox News method of generating reasonable doubt among his loyalists. Trump said "nobody knows" what's going on with the drought, even though the opposite is true. He also said there's no drought in the first place. Then he said, "We’re going to solve your water problem. You have a water problem that is so insane." There's no drought. But there's a water problem. Although nobody knows. By downplaying the issue and casting doubt as to whether it even exists, he's giving his disciples an excuse to support either inaction or counterproductive action that could potentially worsen the crisis.

By the way, Trump says he'll "bring the water." Great, though I was hoping he'd blurt, "I know water. I have the best water," but unfortunately Trump doesn't take requests for variations of his greatest hits. And by "greatest," I mean "astronomically dumb." Kidding aside, let's dig into how exactly to solve this Trump dilemma.

New approaches to covering Trump are mandatory. Obviously. How exactly, then, should the press revolt against this cartoon character?

1) Throw away the script. There's been a commonly recognized election script in use by the press for most of my adult life, and every presidential campaign is generally covered the same way, but with different casts of characters every four years. Trump doesn't fit the script. He's not Romney or Obama or McCain or Kerry. He's far worse than George W. Bush, who at least played along with the game. Trump is playing a new kind of politics and it's closer to a psy-op than a campaign. He's manipulating his people and he's using the news media's script to his advantage. He's lobbing nuclear missiles while the press is lining up with muskets and bayonets. Rather than covering, for example, his drought remarks by bringing in one of his marble-mouthed staffers, cable news people, in particular, need to explain exactly how Trump is manipulating the public. Too often, we get lost in the weeds, focusing too heavily on the details of the remarks themselves rather than outlining how Trump is scamming his own people because he knows the American people are easy to manipulate. So, reveal the man behind the curtain. Expose his tricks. Expose the psy-op. It's too easy to get lost in Trump's Gaffe Of The Day, while losing sight of the bigger manipulation.

2) Keep Trump off balance. Trump is at his deceptive best when he controls the narrative. Conversely, Trump is at his most vulnerable, and is therefore most awkward, when the press or one of his political opponents seizes the initiative. Put another way, when Trump is surrounded and in trouble, he lashes out like a baby. The other day, when the press corp hammered him on his fishy veterans donations, Trump, faced with having to perform media triage, crapped his cage then whined, "Instead of being like, ‘Thank you very much, Mr. Trump,’ or ‘Trump did a good job,’ everyone said: ‘Who got it? Who got it? Who got it?’ And you make me look very bad. I have never received such bad publicity for doing a good job." Aww. Poor wittle Donald. Nobody loves him. Seriously, his people mostly view Trump as a strong leader. If he's kept off balance and is forced to whine about how he's always being mistreated, it directly targets and undermines his strengths. Once he's off balance, hit him again with another item from the bottomless cup of scandals. Don't let up. From there, the stories will be manifold, and Trump will be mostly de-fanged.

3) Use his greatest weakness against him. Trump loves sycophantic praise, so use it. Once he's lulled into a false sense of security, immediately pivot to another major line of attack (take your pick). He steps into it every time, so it should be easy. In interview situations, this is especially effective because it's casual and one-on-one. Spend a lot of time talking about one of his few success stories, then, on a dime, nail him with something heinous. He'll feel so hurt and betrayed, it'll be difficult for him to adequately respond. Then hit him for babbling or being incoherent. Deconstruct his reaction to his face. Burrow under Trump's puffy orange skin and nest there like supremely itchy parasites.

4) Don't be afraid to walk out. The news media is all about access. I get it. Journalists don't want to be exiled by anyone, especially presidential candidates like Trump who's a ratings machine. But Trump is fighting a war against the press, and his supporters know it. Concurrently, however, Trump needs the press. His success so far was built almost entirely on free, uncritical coverage. So, if he gets snippy and insulting, leave. Organize a walk-out. In addition to Hillary Clinton, the reporters assigned to his beat are, collectively, Trump's formidable opponents, and he needs an enemy in order to continue his war. Deprive him of his enemy by getting up and storming off. Shut off the cameras, put down the iPhones and walk away. Leave him standing there, helpless and nakedly awkward. Embarrass him the way he's embarrassed the press. Editors and newsroom producers assume this will backfire, but this is an all new ballgame with different rules. Don't assume he'll ban his entire press-bus from covering the campaign. Assume that he needs you as much as you need him. And if he has to rely exclusively on D-list outlets like Newsmax, fine. It only underscores how he's a D-list candidate.

Of course, I'm not holding my breath waiting for a changeover for how the press handles this circus clown. The news media will likely continue on as it always has, with too many complacent hacks giving Trump the benefit of the doubt despite the reality that he's systematically eroding the news media's power — emasculating the press every chance he gets. Simply covering what he says, with the same lackadaisical attitude that's normally applied to traditional candidates, is only empowering Trump. He's playing on a different level and, so far, he's easily running circles around the reporters tasked with covering him. And, to quote Jon Stewart, it's hurting America.