Germany recognizes Armenian Genocide, renewing calls for U.S. to do the same — and for Obama to fulfill his promise 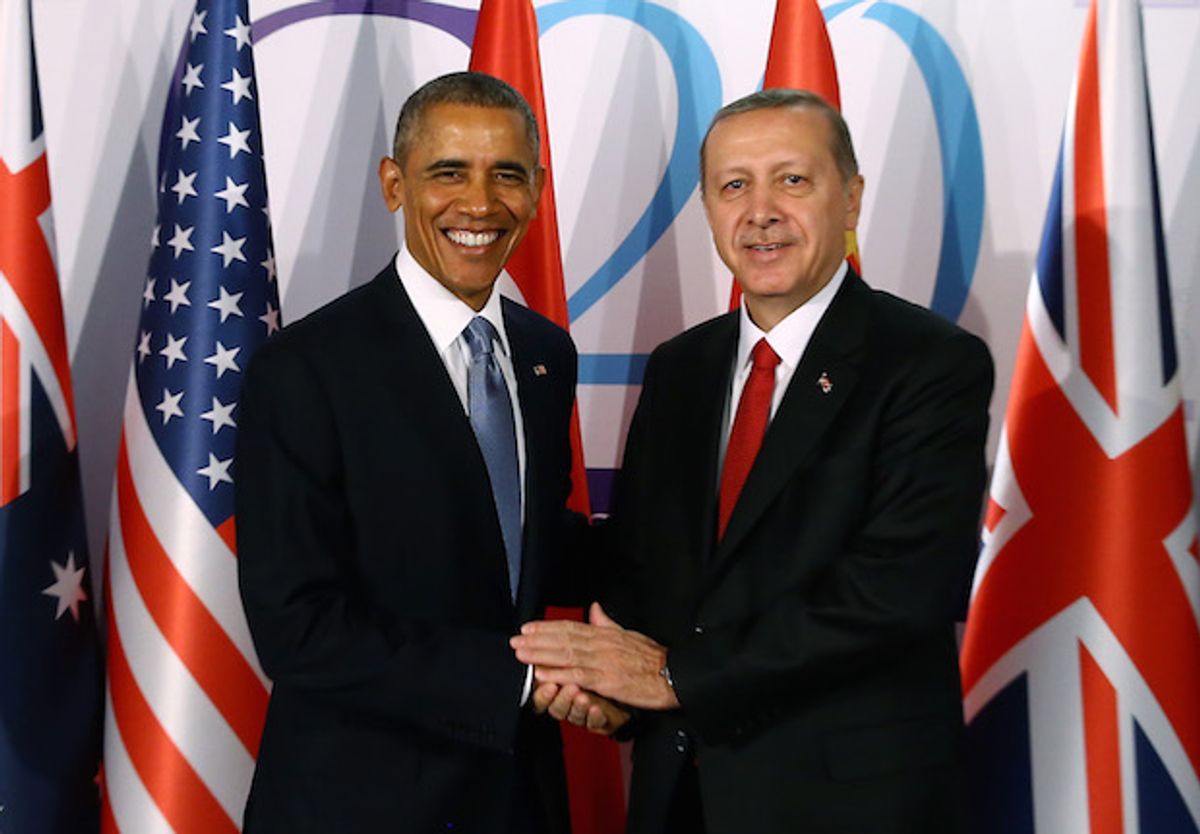 President Obama poses for a photo with Turkish President Recep Tayyip Erdoğan at the G20 summit in Antalya, Turkey on November 15, 2015 (Reuters/Kayhan Ozer)
--

Germany's parliament, the Bundestag, made history on Thursday by voting in a landslide to officially recognize the Armenian Genocide.

The historic decision renewed calls for the U.S., which has long remained silent on the issue, to do the same. On the eve of entering the White House more than seven years ago, Obama promised to recognize the genocide, yet has failed to do so.

In response to Germany's recognition, an Armenian American advocacy group blasted the Obama administration for its silence, dubbing it the "leading international enabler of [Turkey's] campaign of genocide denial."

Historians estimate between 1 million and 1.5 million Armenians were killed in the genocide, out of a previous population of just 1.7 million to 2.3 million. Some scholars say the number of Armenians who survived the genocide may have been as low as 100,000.

There is essentially no disagreement among experts that there was a genocide of Armenians Genocide and that it was premeditated and intentional.

The term “genocide” itself was in fact coined by Holocaust survivor and lawyer Raphael Lemkin to refer to not just the crimes of the Nazis, but also those of the Turks in World War I.

Today, however, the Turkish government continues to deny that the atrocities that took place constitute a genocide. It downplays the severity of the crimes and claims they were an unfortunate product of World War I.

Within hours of the Bundestag's historic vote on Thursday, Turkish President Recep Tayyip Erdoğan withdrew his country's ambassador in Germany.

Turkey's ruling right-wing AKP party subsequently issued a joint statement condemning the vote, calling it a "decision which is against history" and insisting it "will no doubt have an impact on German-Turkish relations and will damage bridges of friendship between the two countries."

Germany was an ally of the Ottoman Empire in World War I, while the U.S. was an enemy. Yet, more than a century later, the U.S. government continues to let politics trump history. It refuses to recognize the Armenian Genocide in order to avoid alienating its close ally Turkey, which is a NATO member.

The Armenian National Committee of America condemned the Obama administration in a statement on Thursday for its unwillingness to take action.

The Armenian National Committee of America noted that the Bundestag's vote is "made all the more powerful by its honest reckoning with Germany’s own role in this still unpunished crime," adding that it "further isolates Turkey, while shining a global spotlight on the Obama Administration as the leading international enabler of Ankara’s campaign of genocide denial."

Although the U.S. federal government has not recognized the Armenian Genocide, 44 U.S. states have recognized it, as of May.

Obama has not always been so timid about the issue. As a senator, he openly spoke of the Armenian Genocide. In a statement on Jan. 19, 2008, just one day before he was sworn into office, Obama wrote: "The facts are undeniable. An official policy that calls on diplomats to distort the historical facts is an untenable policy."

More than seven years later, Obama has failed to fulfill his promise.

Pope Francis recognized the genocide last year. Austria's parliament also voted to do the same, leading to backlash from Turkey.

Increasingly authoritarian Turkish President Erdoğan has condemned countries for recognizing the genocide, and has threatened to jeopardize diplomatic ties with those that do so.

Under Erdoğan, the Turkish government has waged a brutal military campaign against another minority: the Kurds. In recent months, Turkey has killed thousands of Kurds and displaced hundreds of thousands more in a vicious assault on Kurdish rebel groups.

The U.N. has accused the Turkish military of "extremely alarming" crimes, such as deliberately targeting unarmed Kurdish civilians — including women and children — with snipers, tanks and other military vehicles.

The Turkish government has also supported ultra-sectarian extremist groups in Syria, including al-Qaeda affiliate Jabhat al-Nusra and the violent Salafi group Jaysh al-Islam. Both have carried out massacres of civilians from ethnic and religious minority groups, and have even kidnapped and put Alawite Muslim civilians in cages to be used as human shields.

Scholars at the sixth biennial meeting of the International Association of Genocide Scholars, in 2005, unanimously approved a letter to then-Prime Minister Erdoğan and the Turkish government noting that "the overwhelming opinion of scholars who study genocide" is that the Ottoman Empire carried out a "systematic genocide of its Armenian citizens."

"The Armenian Genocide is abundantly documented by thousands of official records of the United States and nations around the world including Turkey’s wartime allies Germany, Austria and Hungary, by Ottoman court-martial records, by eyewitness accounts of missionaries and diplomats, by the testimony of survivors, and by decades of historical scholarship," the scholars explained.

They added: "To deny its factual and moral reality as genocide is not to engage in scholarship but in propaganda and efforts to absolve the perpetrator, blame the victims, and erase the ethical meaning of this history."