Mark Cuban is the perfect foil for Donald Trump: We need the billionaire investor to keep talking 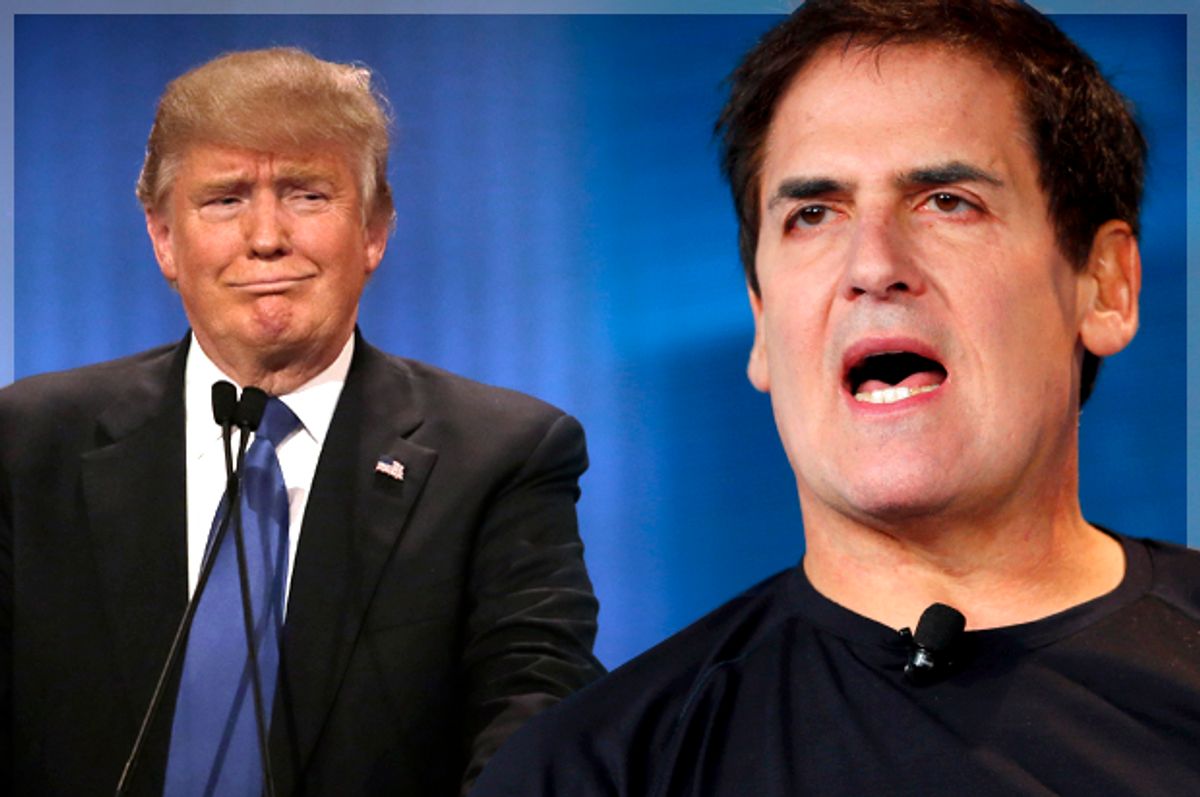 Mark Cuban is becoming more likable by the day.

If you're not a sports fan or an investment aficionado, you may not know who Mark Cuban is. He made a fortune in the business world before buying the Dallas Mavericks basketball team in 2000. He has since become one of the NBA's most vocal and interesting owners. Like all large personalities, Cuban is polarizing, but he's also bright and opinionated.

Recently, he's lunged into politics, appearing on NBC's “Meet the Press” to discuss the presidential race. Always candid, Cuban was asked about his interest in joining one of the tickets as the VP nominee. “If [Trump] asked me, I'd be like, 'Okay, Donald. That's great. Let's talk about it. But we're both going to have to dig in and really look and understand the issues so we can come up with solutions.” Cuban appeared more open to running alongside Clinton. Asked if he'd listen to her pitch, he said “Absolutely,” but “she would have to go more to the center.”

In an interview this week on "The Bernie and Sid Show" on  77 WABC in New York, Cuban entered the fray again, this time attacking Trump's financial prowess:

Just for fun, Cuban questioned Trump's billionaire status and added that he has more money than the presumptive nominee: "It's not even close," and "the reason I know is when you file your federal election campaign reports, you have to list all your cash and liquid securities and bonds. You have to list them one by one. So we know without any question that as of May 27, Donald doesn’t have more than $165 million in cash and securities and bonds...And trust me, I've got a lot more than that." Of course, this was a totally unnecessary jab, but it's the kind of thing Trump's bloated ego can't handle – that's reason enough to say it.

I've no idea how serious Cuban's political flirtations are. He wouldn't be my first, second or tenth choice for vice president (I wouldn't nominate anyone without meaningful political experience). As a purely tactical matter, though, Cuban's the perfect foil for someone like Trump, whose whole persona is a house of cards. All the bluster and bombast is a front, a mask. As John Oliver famously observed, everything about him (including his name) is a fabrication. He's a case study in self-invention and modern branding. Sure, he deserves credit for transitioning seamlessly from television huckster to political entrepreneur, but that doesn't make him any less full of shit.

Trump's great asset is his incapacity for shame. A willingness to say or do anything to win the headlines can take a man a long way in this game. This is what makes him such an effective bully: he'll always go farther than the next person. To counter that you need someone who can match Trump's bravado, someone unafraid to challenge him in his own terms.

And this is what makes Mark Cuban so intriguing as a VP candidate. Unlike Trump, Cuban's record in business is unimpeachable. He's also fearless and liberated from conventional political constraints. Trump's gaseous tough guy shtick won't work against an actual billionaire and accomplished businessman like Cuban.

Will Cuban be on the ticket in November? No, and he shouldn't be. But I hope he continues speaking out. In fact, if you're reading this and know Cuban personally, kindly forward this request. Tell him his country needs him. Tell him the world needs him. Tell him whatever he needs to hear. Just make sure he keeps talking.