Religious extremism in the age of Trump: Empowered radicals are pushing harder than ever to legalize discrimination

The Religious Right is gearing up for more assaults on LGBT and gay rights in state houses around the U.S. 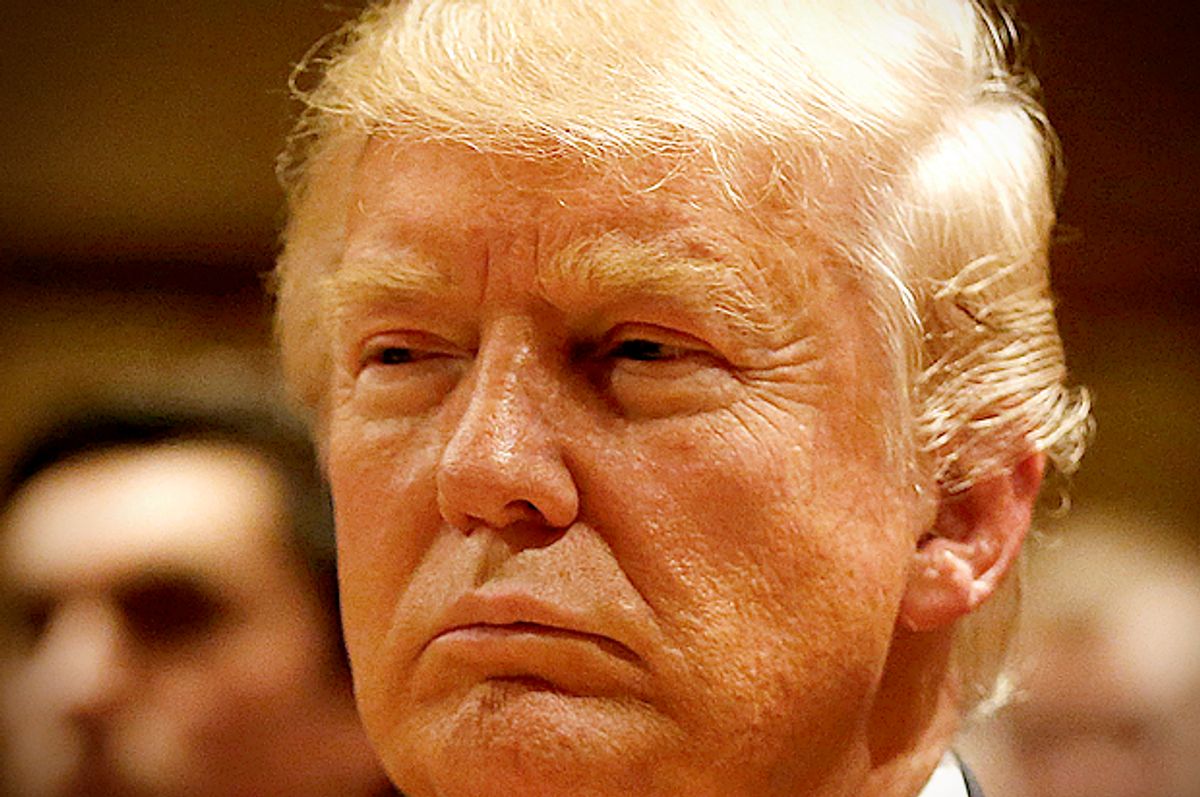 A surprising consequence of the Trump phenomenon has been what seems to be the collapse of a number of major conservative movement institutions which have for decades been assumed to be vitally important power players in presidential elections. Trump has shown that he can dominate the influential

Trump has shown that he can dominate the influential right-wing media simply by playing them off against the mainstream in ways that nobody has ever before even tried. The vast donor network has been completely flummoxed by a man who has found a way to win elections without spending any money and the big social conservative groups have been left sitting by the sidelines as a crude vulgarian lures their followers out of the pews and into ecstatic mass rallies where they rapturously cheer his incoherent promises to make America great again. This challenge to the conservative movement status quo is every bit as destabilizing as the challenge to the political establishment itself.

I noted a few days ago that the Koch brothers had made a momentous decision to pull back from presidential politics, having been disappointed that their support in the last few years didn't result in the full enactment of their agenda. But just because they are taking their ball and going home it doesn't mean they aren't playing anymore. They're just lowering their profile and concentrating on down ballot races and the state legislatures where they have had remarkable success in the past. And they aren't the only ones.

People for the American Way released a report showing that rather than leaving worldly politics behind in reaction to the rise of the boorish and profane Donald Trump, as many people have been predicting, the religious right is gathering their forces for more assaults on the state houses around the country in pursuit of what they have duplicitously labeled "religious liberty". Whatever disappointments they may be experiencing in national politics, their zeal to force people who have different (or no) religious beliefs to conform to theirs has not abated.

These people do not appear to have gotten the memo that once marriage equality was affirmed by the Supreme Court the issue was settled. In fact, that ruling sparked a coordinated effort among conservative religious organizations to  roll back gay rights wherever they can. The report says that in 2016 over 100 anti- LGBT equality bills have already been introduced in statehouses around the country. And there is every indication that these activities are picking up speed.

You may recall this piece about the "Manhattan Declaration" the 2009 anti-gay, anti-abortion manifesto which made a novel legal argument that not being allowed to inflict your religious beliefs on others is a denial of your religious freedom. They declared:

In recent decades a growing body of case law has paralleled the decline in respect for religious values in the media, the academy and political leadership, resulting in restrictions on the free exercise of religion. We view this as an ominous development, not only because of its threat to the individual liberty guaranteed to every person, regardless of his or her faith, but because the trend also threatens the common welfare and the culture of freedom on which our system of republican government is founded

Restrictions on the freedom of conscience or the ability to hire people of one’s own faith or conscientious moral convictions for religious institutions, for example, undermines the viability of the intermediate structures of society, the essential buffer against the overweening authority of the state, resulting in the soft despotism Tocqueville so prophetically warned of. Disintegration of civil society is a prelude to tyranny.s

Oddly, not many leaders of the Christian Right are speaking out against the crude incivility and authoritarianism of Donald Trump, so apparently it's only gay people wanting to buy some flowers that threatens the republic.   Be that as it may, these folks have developed an elaborate strategy to enshrine in the law and the culture the idea that laws which ban discrimination are an unconstitutional infringement on a religious person's freedom to discriminate.

This is now a fully formed national crusade. The People for the American Way report, titled Who Is Weaponizing Religious Liberty?, lays out the alarming details:

Included in the recent anti-equality wave are various types of legislation, including state-level Religious Freedom Restoration Acts (RFRAs), modeled to different degrees on the federal law of the same name; so-called Government Nondiscrimination Acts (GNDAs), which do away with the federal RFRA’s balancing tests to give special legal protection to discrimination based on anti-equality religious beliefs; and anti-LGBT laws that don’t explicitly fly under the religious liberty banner, like bills barring transgender people from using the public bathrooms appropriate for their gender identity.

Some of those bills have been defeated, thanks to mobilization by equality advocates and their allies in progressive, religious, and business communities. Others have been approved by state legislatures but vetoed by governors, including Republican Gov. Nathan Deal of Georgia and Democratic Gov. Terry McAuliffe of Virginia. Still others have been signed into law, including Mississippi’s “religious liberty” law and North Carolina’s now notorious HB2, a law overturning local nondiscrimination ordinances and banning transgender people from using public restrooms that match their gender identity. Inflammatory rhetoric about transgender people has fed an increasingly ugly climate in which states and localities are literally making it a crime for a transgender person to go to the bathroom.

All of these approaches are being promoted by a network of national Religious Right organizations that oppose legal recognition for the rights of LGBT people. These organizations are part of a larger infrastructure of colleges and law schools, think tanks, media outlets, and advocacy groups that has been built over the last few decades. They work together to promote the false and destructive idea that legal equality for LGBT Americans is incompatible with religious freedom for those who oppose it — just as early civil rights opponents claimed that eliminating enforced racial segregation was an attack on southern white Christians’ religious beliefs.

This network of anti-equality groups is engaged in a high-stakes effort to convince Americans that preserving religious liberty requires giving individuals and corporations the power to disobey laws that promote the common good and protect other constitutional principles like equal treatment under the law.

The report lists all the groups involved in this undertaking which include the Family Research Council and FRC Action, Heritage Foundation and Heritage Action, the National Organization for Marriage, the Alliance Defending Freedom, Liberty Counsel, the American Family Association, the Becket Fund, and the American Principles Project. They have a highly organized, coordinated legal, legislative and public relations strategy to embed this concept into American law and civic life. And they do not care one whit if Donald Trump or Hillary Clinton is in the White House, their plans will remain the same.

The report concludes with this:

The groups reviewed in this report represent the tip of the iceberg of a much larger movement that is trying to eliminate legal access to abortion and roll back legal protections for LGBT people, couples, and families — and trying to do so in the name of religious liberty. Anti-equality and anti-choice forces have made religious liberty their rallying cry precisely because genuine religious liberty is such a broadly cherished American ideal.

The lesson here is that even as the Trump craziness dominates the conversation and our civic life seems to be morphing into something unrecognizable, more familiar political activity carries on at all levels of society. I recall the feeling of euphoria when the Supreme Court ruled in favor of marriage equality being tempered by the knowledge that reproductive rights had been under siege for decades despite Roe vs Wade.  We're already seeing the battle lines expand on LGBT rights from marriage to bathrooms.

A lot of people's paychecks depend upon ensuring these crusades continue in spite of public opinion or legal acceptance. The Religious Right is an industry as much as a cause and they have plenty of money and staying power. They're not going anywhere.