This is "X-Men" overkill: Give Mystique and Wolverine a time-out, before it's too late

A Mystique spin-off? More Wolverine? Trying to keep up with Marvel & Disney might exhaust the franchise for good 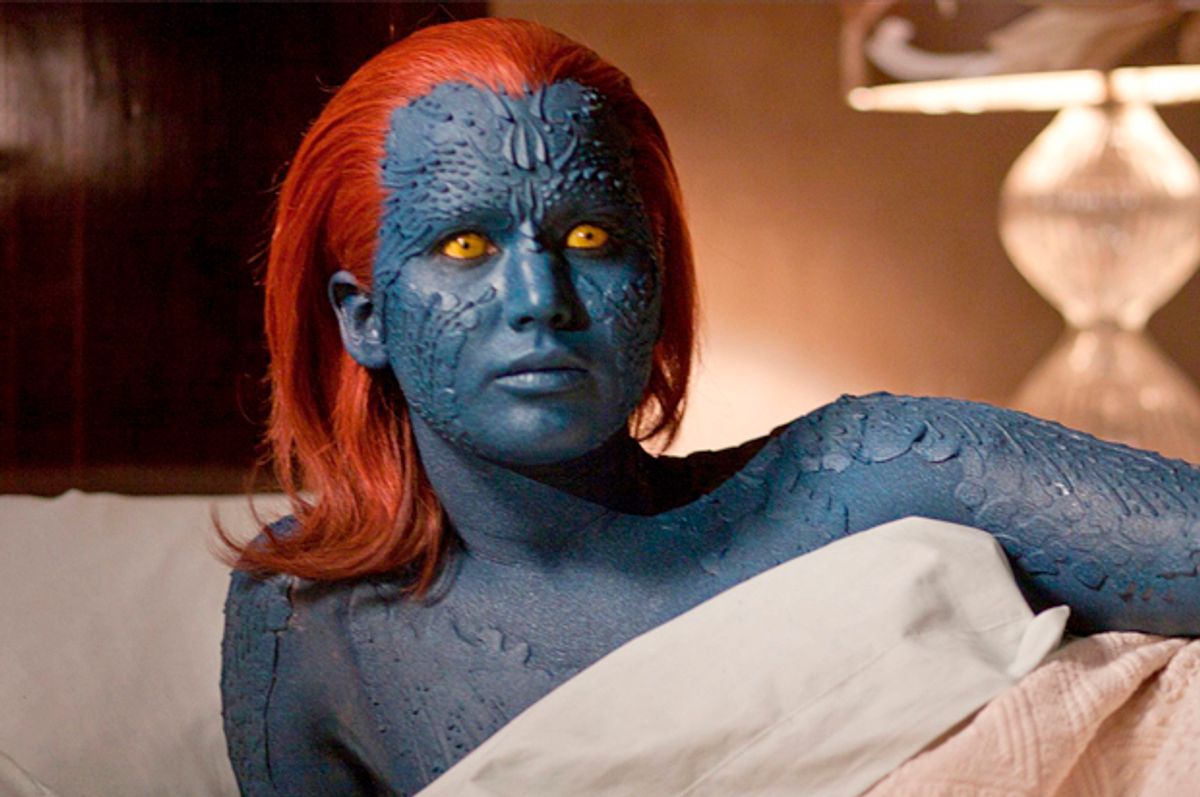 What happens when a beloved film franchise finally has one too many? At one time, it meant that your series got cut off—for good.

The groundbreaking success of “Jaws”—from a then up-and-coming director by the name of Steven Spielberg—in 1975 created the template for the summer blockbuster as we know it. The film launched two successful sequels: “Jaws 2” and “Jaws 3D.” Neither of those films were classics, but they made just enough money to keep the killer-shark franchise afloat. They were followed, however, by the fiasco that was “Jaws: The Revenge,” which earned just 2 percent (in adjusted dollars) of what Spielberg’s original brought in. Starring a just-here-for-the-money Michael Caine, the Worst Picture nominee notoriously features a screaming shark (even though sharks don’t have vocal cords). The film’s failure was enough to sink “Jaws” to the ocean floor.

Meanwhile, 1997’s “Batman and Robin” sullied Bruce Wayne’s reputation with such aplomb that the series was scorched earth for the better part of a decade. The Caped Crusader wouldn’t flap his bat wings again until 2005, when a then-up-and-coming director by the name of Christopher Nolan took over the reins. Even Bond knew when to take a break: After a string of critical misfires in the Brosnan era (“The World Is Not Enough,” “Die Another Day”), Sony waited four years before passing the torch to Mr. James Blonde, Daniel Craig.

But in the face of disaster, “X-Men: Apocalypse” shows no signs of slowing down. Last weekend, the Bryan Singer-directed film (now the ninth overall film in the expanding mutant franchise) earned just $65 million in theaters. You might be thinking to yourself: “Hey, that doesn’t sound so bad! That’s a lot of money!” By most standards, it is. That figure is more than most movies earn during their entire run. Those numbers, though, represent a steep dropoff from “Days of Future Past,” the last proper entry in the “X-Men” film canon. That movie, a hit with both critics and audiences, earned $90 million during its opening weekend ($110 million if you count the Memorial Day holiday). That’s a sizable 28 percent dip.

“Apocalypse” has not shared that film’s warm reception. Currently, the film sits at a 48 percent on Rotten Tomatoes, making it the worst-reviewed film in the core series’ history. Yes, that’s even lower than “The Last Stand,” a movie that featured the line: “I’m the Juggernaut, bitch!” That movie, which egregiously botched the Phoenix saga, was so widely hated by fans that the series took a six-year hiatus before rebooting with 2011’s “X-Men: First Class,” which reimagined the series as a Cold War parable. If “Apocalypse” follows the box office fortunes of “The Last Stand” (which had a 2.28 multiplier), it will end with just over $150 million.

That sum does not bode well for the future of the “X-Men” franchise, whose box office clout has been in decline in recent years. “Apocalypse” will likely finish near the bottom of the heap, just above the James Mangold-directed spin-off “The Wolverine,” whose $132 million ($144 million adjusted) take was a major disappointment for Fox back in 2014. Aside from the extraordinary success of Tim Miller’s “Deadpool,” all the most profitable “X-Men” films are entries in the original trilogy. It’s a franchise whose best days largely appear to be behind it.

The series’ waning fortunes isn’t just a matter of audience fatigue; the actors themselves seem exhausted. It’s easy to see why. Hugh Jackman, who has a brief cameo in “Apocalypse,” has now played Wolverine eight times since 2000, while Michael Fassbender, James McAvoy and Jennifer Lawrence have all suited up thrice. Lawrence is a wildly magnetic talent, and the success of “The Hunger Games” franchise is an enormous testament to her star power. But in “Apocalypse,” even an actress as effortless as Lawrence appeared to be going through the motions. (In a recent interview, she blamed it on the paint fumes from Mystique’s blue costume.)

It shouldn’t be surprising, then, that Lawrence announced last May that the current entry would be her last stint as the duplicitous changeling Raven Darkholme — her contract is up, as are Fassbender’s and MacAvoy’s, and the three have declared they would only re-up if all agreed. Jackman plans to hang up his claws after one last shot at a solo outing: An R-rated Wolverine—that will reportedly be truer to Mangold’s original vision for the previous film—is due in 2017. In addition, the Brit who plays Beast, Nicholas Hoult, told E! Online that his contract is up after “Apocalypse,” too. Even Singer likely won’t return to the franchise he created.

This would seem an ideal time to hit the pause button on “X-Men” and give the characters and their fanbase some time to breathe before greenlighting yet another take on a series that appears to have worn out its welcome. According to Vox’s Peter Suderman, the biggest issue with “Apocalypse” is that Singer’s fourth installment had simply “run out of ideas.” He wrote, “The kinetic spark and social engagement that animated Singer’s previous entries has been entirely drained, replaced with a glum sense that everyone involved is merely going through their contractually obligated motions.”

A lack of divine inspiration, though, didn’t stop Fox from pushing a slew of follow-ups before “Apocalypse” even debuted in theaters. In addition to a third Wolverine film, we’re getting a Deadpool sequel, a TBD Gambit movie (starring Channing Tatum), and potentially a Mystique spin-off, one that Bryan Singer said could happen with or without Ms. Lawrence’s involvement. In addition, there’s the planned launch of “The New Mutants,” set to be directed by Josh Boone (“The Fault in Our Stars”). Rumors suggest that Maisie Williams (“Game of Thrones”) is attached to play Wolfsbane, one of a team of crimefighting mutant teenagers. That film will reportedly take place in the present day.

In addition to an “X-Force” movie waiting in the wings, producer Simon Kinberg has already announced that there are plans for an “Apocalypse” sequel, one that would be set in the 1990s. If the possibility of yet another “X-Men” time jump sounds daunting—after the last three films have been respectively set in the 1960s, ’70s, and ’80s—hold on to your hat: The mutants are also getting not one, but two television shows.

FX is bringing out its big guns for “Legion,” set to be executive produced by Noah Hawley. Hawley was the man behind the network’s critically beloved adaptation of the Coen Brothers’ “Fargo.” Hawley’s series will follow David Haller, the mutant offspring of Professor Charles Xavier. Starring Jean Smart (“Fargo”), Aubrey Plaza (“Parks and Rec”), Dan Stevens (“Downton Abbey,” “The Guest”), and Hamish Linklater (“The Future”), the program will have an eight-episode run—as of now—on the network. It’s set to debut later this year.

There’s also “Hellfire,” which will air on Fox. The Big Four network has dipped its toes into superhero fare in recent years with “Gotham,” the Bruno Heller-produced Batman prequel that has never quite lived up to expectations. “Hellfire,” produced by Evan Katz and Manny Coto of “24,” will center on a secret society of one-percenters intent on world domination, known as “The Hellfire Club.” It’s unclear as to whether Kevin Bacon and January Jones—who repped the organization in “X-Men: First Class” as Sebastian Shaw and Emma Frost, respectively—will appear in the television adaptation. (In the case of Jones, let’s hope not.)

Usually when a film spawns this many spin-offs, it’s because a franchise is at the top of its game. “The Avengers” broke box-office records in 2012, becoming the first movie to ever make over $200 million. (Remember those quaint days when the $72 million opening of “The Lost World” felt unsurpassable?) “The Avengers” not only earned another sequel (courtesy of geek maestro Joss Whedon), but Marvel also launched two broadcast series (“Agents of S.H.I.E.L.D.” and “Agent Carter,” which was canceled after season 2). The studio would soon after announce its partnership with Netflix, where it has aired “Daredevil” and “Jessica Jones,” the latter arguably its most beloved superhero show to date.

Marvel has been extremely skilled at mapping out its labyrinthine web of superhero franchises, so much so that the studio has its slate scheduled until 2019, when “Captain Marvel” (rumored to star recent Oscar-winner Brie Larson) and “Avengers: Infinity War, Part 2” will debut. The superhero powerhouse has also discussed making room for a “Black Widow” spin-off, after recent criticism of the popular character getting saddled with an unpopular infertility storyline in “Age of Ultron” and sidelined altogether in “Civil War.”

Given that Marvel and its parent company, Disney, more or less run Hollywood these days, every studio has been desperate for its own endless configuration of franchises to rival what “The Avengers” and, most recently, “Star Wars” are doing. In 2014, Universal launched what it hoped would be the first in its shared universe of classic monster movies—the dull, bloodless “Dracula Untold.” After yet another “Fast and Furious” film (the eighth since 2001), the studio plans to spin off Dominic Toretto and his multicultural gang of thieves into their own separate series. It even wants to develop its middling “G.I. Joe” series, which has never quite caught fire at the box office, as its own cinematic universe.

Even “Transformers,” a once-blockbuster franchise that has been noticeably limping in recent years, has plans for yet another Michael Bay-directed entry in the series and then a potential slew of offshoots. “Last summer, Paramount hired a gaggle of writers to spend a few weeks brainstorming ideas to broaden the series, an effort that apparently produced at least nine different movie ideas--and producers have said that five of those ideas look viable,” Suderman writes. Recent reports suggest the “Transformers” series may loop into the “G.I. Joe” films.

If there are other expanded universes planned for everything from “The LEGO Movie” series and the all-female “Ghostbusters” reboot to the Frankenstein’s monster that was “Batman v Superman,” the problem is that studios are on the franchise conveyor belt, seemingly no matter what. After the failure of the “Fantastic Four” reboot, which had been greenlit for a sequel before the Josh Trank film bombed in theaters, Fox simply can’t leave another tentpole behind. To keep up with Disney and Marvel’s everlasting gobstopper of blockbusters, it’s full steam ahead—even if it means sinking the ship in the process.

“X-Men” will probably never get the lifeboat that its creators and actors (let alone the studio) so desperately need before being rebooted all over again quicker than you can say Peter Parker. And following “Days of Future Past,” which essentially blew up the traditional X-Men narrative, Singer told Variety that Fox can do basically whatever it wants. “[N]ow that we’ve altered the timeline, there are endless possibilities,” he said.

With at least seven more “X-Men” movies and two TV shows ahead of us, that prospect is more terrifying than a screaming shark.