WATCH: Ken Starr abruptly yanked out of interview when confronted about emails revealing he knew about Baylor rape allegations 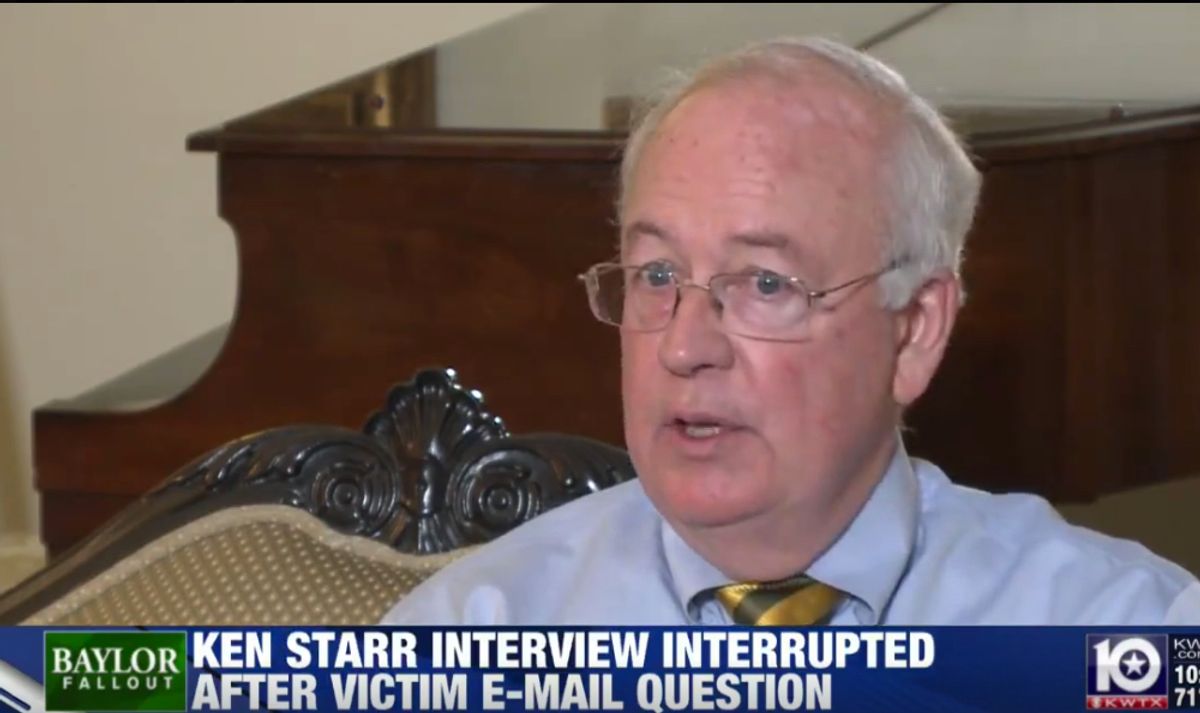 Ken Starr is conveniently making the media rounds claiming he voluntarily resigned as the president of Baylor University after a damning report revealed that under his leadership the Texas college failed to investigate widespread allegations of campus sexual assault, now arguing he left in order to more freely discuss the issue. Unfortunately for his efforts to save the last remnants of his reputation, a pair of new interviews out this week actually reveal Starr to be either totally inept or an absolute liar.

First, Starr sat for an interview with ESPN on Wednesday where he announced that after being booted as Baylor's president last week, he'd also given up his position as University chancellor "as a matter of conscience."

Starr gave an incoherent and rambling explanation to ESPN's Joe Schad about why, as the leader of the institution, he did not know about the numerous sexual assault complaints, citing a "veil of ignorance":

The interview went so disastrously that, according to Yahoo News, "by evening, his PR firm was cancelling previously scheduled interviews."

But, as if that interview wasn't embarrassing enough, a local CBS News affiliate in Texas this week later decided to publish a revealing portion of its interview with Starr, showing the former special prosecutor who vigoursly investigated Bill Clinton's sexual impropriety in the White House being abruptly interrupted by a public relations expert after Starr was asked about specific allegations of campus rape that he reportedly ignored while at Baylor.

KWTX-TV posted to its Facebook a previously unreleased portion of its interview with Starr this week showing his longtime media consultant, Merrie Spaeth, cutting off the interview after reporter Julie Hays asked Starr if he had seen an email reportedly sent by a Baylor student who said she was raped by a former Baylor football player in 2009. The email reportedly contained the subject line, "I Was Raped at Baylor," and was sent to several people, including Starr, according to ESPN's "Outside the Lines," the same show on which Starr had ramblingly announced his resignation.

"I honestly may have. I’m not denying that I saw it," Starr initially said, apparently responding to Hays' inquiry in earnest.

But then the footage shows Spaeth quickly swooping in to halt the interview. According to KWTX, Spaeth first tried to get the producer to agree to cut Starr's answer out of the final report. When he refused, the former media relations director at the White House under Ronald Reagan abruptly yanked her old friend out of the interview in an apparent attempt to provide him coaching on the answer. Remember, in an earlier interview, Starr had already asserted he could not have possibly had any inclination about the multiple allegations of rape directed at members of the school's winning football team, pointing to the fact that Christian campus doesn't allow alcohol on property.

Upon returning to the interview room, the video then shows Spaeth telling Starr, "She needs to ask you that question again; whether you do it on camera or not is up to you."

"I honestly have no recollection of that," Starr offered on his second try, before turning off camera to look at Spaeth and saying: "Is that OK?"