Why millennials love Bernie Sanders: This is what Trump, Hillary -- and Chris Matthews -- don't understand about how politics has changed

The media condescends to Sanders the same way it does to millennials. Maybe that's why he gets their concerns 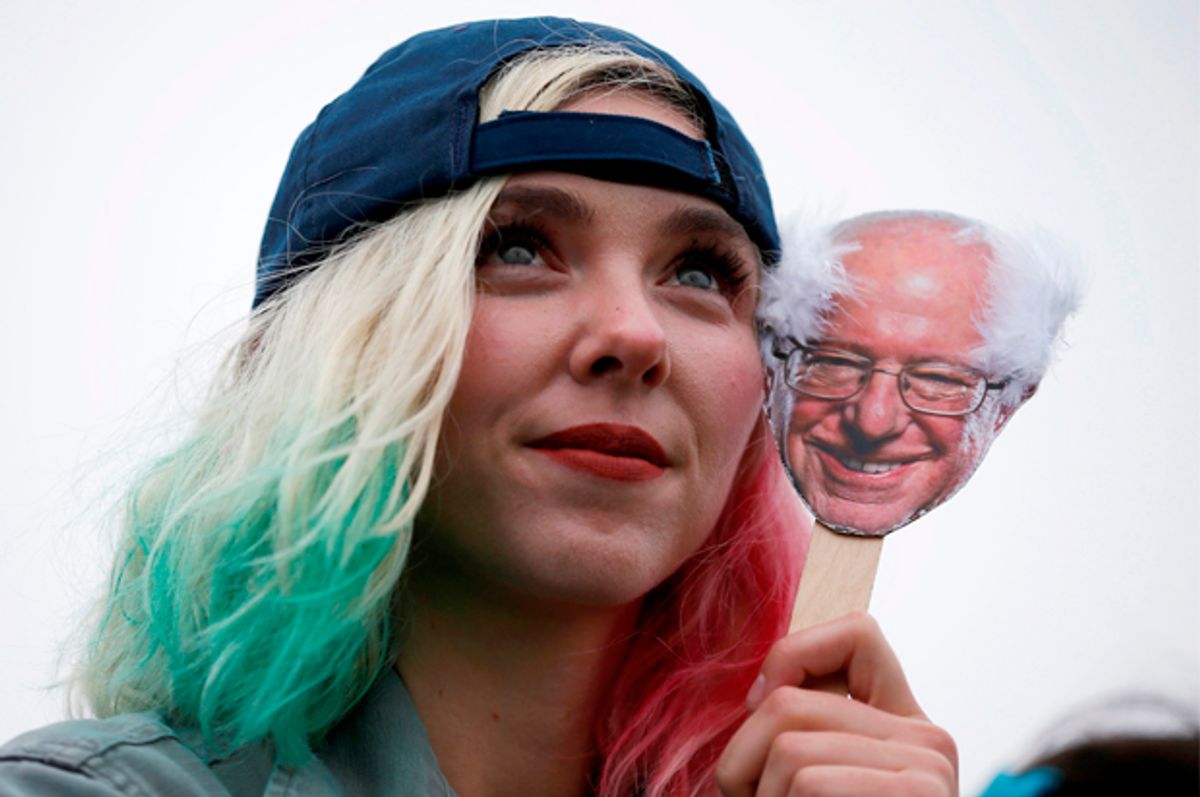 Polls show that both Donald Trump and Hillary Clinton have trouble appealing to young voters.  In a recent study released by Harvard, millennial voters, aged 18-29, overwhelmingly favored Bernie Sanders.  Sanders pulled a net favorable rating of 54 percent, Clinton only had 37 percent, and Trump pulled a miserable 17 percent of the same age group.

While the Harvard study shows that Sanders supporters will likely support Clinton if they have no other choice against Trump, the study also indicates that the Sanders campaign has made a lasting impression on young voters that will remain whether or not he wins the nomination. Polling director John Della Volpe explained that: "He's not moving a party to the left. He's moving a generation to the left. Whether or not he's winning or losing, it's really that he's impacting the way in which a generation — the largest generation in the history of America — thinks about politics."

Della Volpe’s work at the John F. Kennedy School’s Institute of Politics shows that over the course of the Sanders campaign young voters increasingly favored the campaign’s core issues.  Tracking data over time, Della Volpe noted that there was a demonstrable shift towards progressive politics in the last year.  In fact Max Ehrenfreund of The Washington Post suggests that regardless of what happens in the campaign “Sanders might have already won a contest that will prove crucially important in America's political future.”

As The Atlantic reports, this young generation is liberal, leftist and even socialist in record numbers.  Mother Jones reports that it is the largest generation in the country and equal in in voting numbers to the Baby Boomers for the first time ever.

The Sanders campaign has resonated with millennials for the simple reason that he has been the only candidate to take the issues facing our nation’s young seriously.  He was the first candidate to put the issue of student debt on the map and he was the only candidate brave enough to state outright that the greatest security threat to the planet is climate change—not ISIS.

But, perhaps most importantly, his campaign recognizes the very real economic challenges facing young voters, who not only have more debt than any other young generation in U.S. history, but also face higher unemployment and more depressed wages than their elders.

There is a host of overlap in the concerns of young voters and the core issues of the Sanders campaign.

You’d think that given the realities that this generation is now the largest potential voting bloc and that it shows only an increase in interest in political engagement that we would be hearing more about how Sanders has resonated successfully with young voters, how he has changed U.S. politics, and how his platform stands to influence future politics –including the 2016 election.

In fact, you are hearing him be described exactly the same way that millennials are described.

Think about it.  There is an uncanny resemblance between the ways that both millennial causes and the Sanders campaign have equally been dismissed and disparaged.

I’ve covered public portrayals of millennials for years and I have noted a tendency to reduce millennial political protest to the whining of spoiled slackers.  The media coverage of this generation has been one of the most brutal in U.S. history.  From Occupy Wall Street to Black Lives Matter to campus protests for reform, young voters have been treated like self-indulgent idiots who are complaining that their handouts aren’t pouring in fast enough.

I had considered this generational warfare—where the older generations refused to take the nation’s youth seriously.  And where the older generations declined to offer our young the same sorts of opportunities we had all enjoyed.  Rather than recognize the real social and economic challenges of the millennial generation, I argued that society preferred to blame it on their lack of character, refusal to do hard work, and basic selfishness.

In this way millennials were blamed for their own challenges.  They needed to toughen up and grow thicker skin. The rest of us didn’t have to worry about it.  If we had any blame, it was that we have “over-mothered” these pathetic adult babies.

But now given the uncanny echo between millennial-bashing and Bernie-bashing it seems clear that the bulk of these attacks is not mainly about generational warfare. It is far more clearly about the collective failure to take the challenges of this generation—and this nation—seriously.

Millennials may be feeling these challenges more than their elders, but this is really about the way that progressive politics—that favor people over profits--constitutes a real threat to the establishment.

And both Sanders and his young supporters equally see that one of the primary political issues in this nation is the way that capital is protected over citizens.

The critiques of these groups, though, don’t come in the form of reasoned debate about the pros and cons of a two-party system, Democratic Socialism, Black Lives Matter, diversity on college campuses, and so on.  Instead the attacks are personal. They suggest failures of character.

Characterizing social problems as personal problems has been one of the signal achievements of our neoliberal market-based society.  If you don’t have a job, you are lazy.  If you have too much student debt, you’re a loser. And if you are having a near impossible time getting a fair shake at running for president as a party outsider, you are a whiner.

In each case the status quo is defended over legitimate grievances that highlight a rigged system.

The blind acceptance of the establishment status quo was nowhere more apparent than during Chris Matthews’s interview with Sanders campaign manager Jeff Weaver on MSNBC a few days ago. Matthews literally told Weaver that his network and several others plan to call the nomination for Clinton before polls close in California on June 7 and before super delegates even go to the primary.

But rather than spurn a host of backlash over voter suppression, over mistakenly counting super delegate votes prior to those votes actually being cast, and over the heavy-handed role of the media in controlling politics—the Matthews comment went virtually unnoticed.

Instead, despite mounting evidence that Clinton may well be heading into serious fallout from her email scandal, the furor continues over Sanders refusing to “face reality” and drop out so the party can unify.  Given the increasing data that suggest that Sanders is a better foil for Trump in the next election, it is time to wonder why the media isn’t asking Clinton to “face reality” and unify the party.

Thus far, though, we have yet to see the media recognize that the reality of the campaign is indeed shifting.

The good news is that most millennials don’t care, since they aren’t watching Matthews on MSNBC anyway and are more likely to get their news from Twitter and other on-line media.

The point is that millennials, just like the presidential candidate they support, get it. And they aren’t going to buy the establishment narratives of MSNBC, CNN, or Fox News.

At one quarter of the population and growing, millennials will eventually outsize their detractors and will have the numbers to set the political agenda. The Harvard poll also revealed that 51 percent of millennials value integrity and 26 percent value authenticity as the most important attributes in a candidate—a fact that shows why this generation favors Sanders and has a hard time supporting Clinton.

But perhaps even more interestingly, another study showed that 43 percent of millennials favor authenticity over content in their news—a sign that biased commentators like Chris Matthews may soon be a thing of the past.