Rose McGowan wades into the fight over an "X-Men: Apocalypse" billboard showing Mystique being strangled 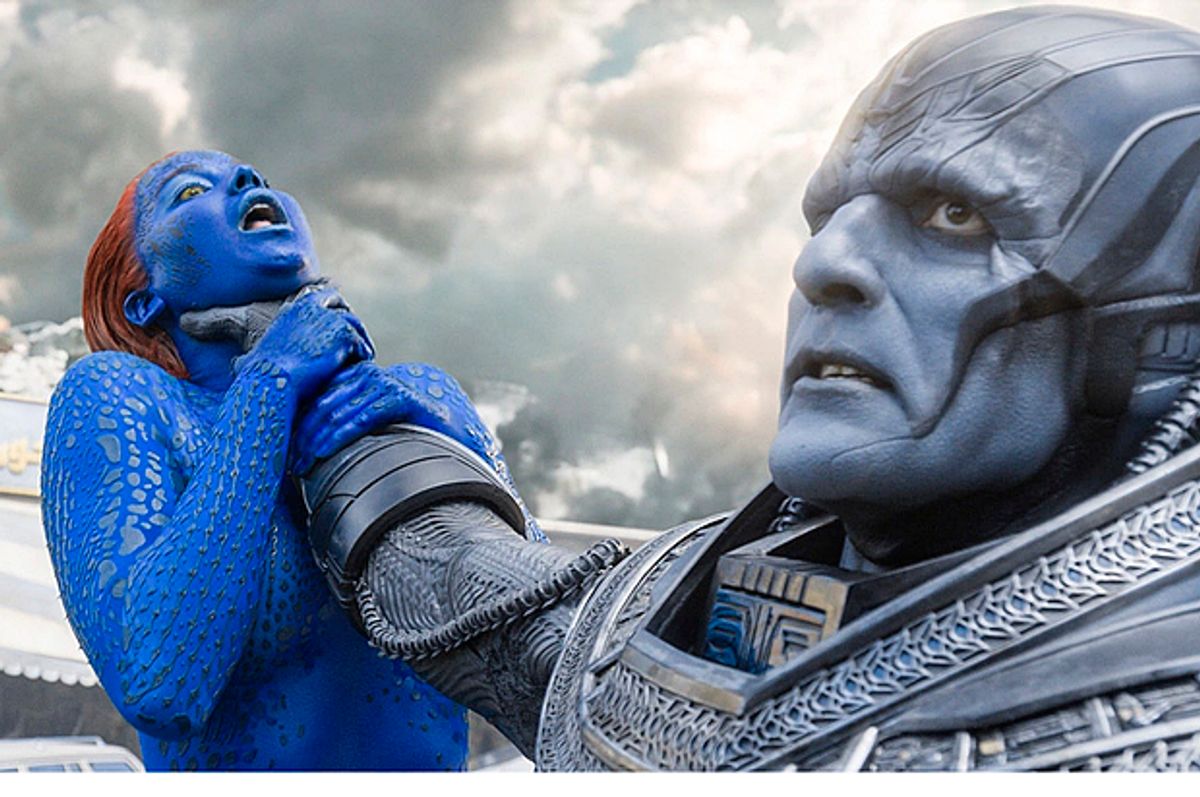 Yes, we all understand that action movies are not reality and that mutants are not real women. That said, do you think anybody at Fox gave a moment of thought to the issues of offscreen violence to women when it decided that an image of Jennifer Lawrence's Mystique being choked was a hot idea as the symbol of its new blockbuster? Or as actress Rose McGowan puts it, "F—k this s__t."

If you live in an area where posters and billboards for summer franchises are as ubiquitous as melting sidewalk gum, you've no doubt seen the image. Lawrence, blue skinned and fearful, helplessly wraps a hand around the mighty mitt of Oscar Isaac’s Apocalypse as he clutches at her throat. The tagline, simply, reads, "Only the strong will survive."

The movie has so far made over $90 million since its opening May 27. And the image for it has certainly has given me pause ever since it first began appearing this spring in the New York City subways I travel regularly. It's not the typical heroic action movie lineup of characters. It's undeniably an image of a woman being choked. And as my 12 year-old daughter put it the first time she noticed it, "I don't like that." Or as an anonymous note writer at the First Avenue L stop wrote recently on the poster there, "This violence in my kid's face is not OK."

In a May 22 post on Legion of Leia, writer Sabina Ibarra reasonably noted that "It’s perfectly plausible that it was ok’d simply because it showcases their most bankable stars and this shot in the film might be the only time they’re face to face." But as she elaborated, "This powerful image of the villain choking out the heroine is selling the stakes on the sort of exploitative representation that women are tired of seeing. Frankly, it’s also inappropriate for kids to be exposed to the imagery in such a public way."

Predictably, several of the comments on her post have expressed the sentiment one young man summed up with the words, "So what?"

But Rose McGowan, who has been famously outspoken about her own experiences of sexism in the entertainment industry, shared the post on Facebook, and then elaborated in comments to the Hollywood Reporter, saying, "There is a major problem when the men and women at 20th Century Fox think casual violence against women is the way to market a film. There is no context in the ad, just a woman getting strangled. The fact that no one flagged this is offensive and frankly, stupid. The geniuses behind this, and I use that term lightly, need to to take a long hard look at the mirror and see how they are contributing to society. Imagine if it were a black man being strangled by a white man, or a gay male being strangled by a hetero? The outcry would be enormous. So let’s right this wrong. 20th Century Fox, since you can’t manage to put any women directors on your slate for the next two years, how about you at least replace your ad?"

She asked, "You could have chosen any from the thousands of images, but you chose this one. Whose attention did you want to get and to what end?"

Late last month on Twitter, Ontario editor Allan Shifman posted a photo of the billboard as viewed from a rooftop restaurant, observing, "This #XMenApocalypse billboard of Oscar Isaac choking Jennifer Lawrence is a pleasant backdrop for date night."

Today, THR reports that Fox has apologized for the billboard in a statement:

"In our enthusiasm to show the villainy of the character Apocalypse we didn’t immediately recognize the upsetting connotation of this image in print form. Once we realized how insensitive it was, we quickly took steps to remove those materials. We apologize for our actions and would never condone violence against women."

The image has its share of defenders on social media, who claim, as one person said on Twitter, "It's a movie about mutants at war, guys." Yeah, we know that. But the marketing of it is about selectivity. It's about choices. It's about what the single image used to define a movie to its fans is, fans who will eagerly boo hoo about feminists ruining everything when they criticize it.

This week, Birth.Movies.Death editor Devin Faraci explained it perfectly, telling THR, "Setting aside that Apocalypse and Mystique look like Smurfs, it's just an image of a big guy choking out a smaller woman. I have wracked my brains trying to come up with an example of a marketing image like this featuring two men, and I've come up empty."