Trump thinks climate change is a total hoax. His thoughts on the Keystone pipeline may be just as dangerous 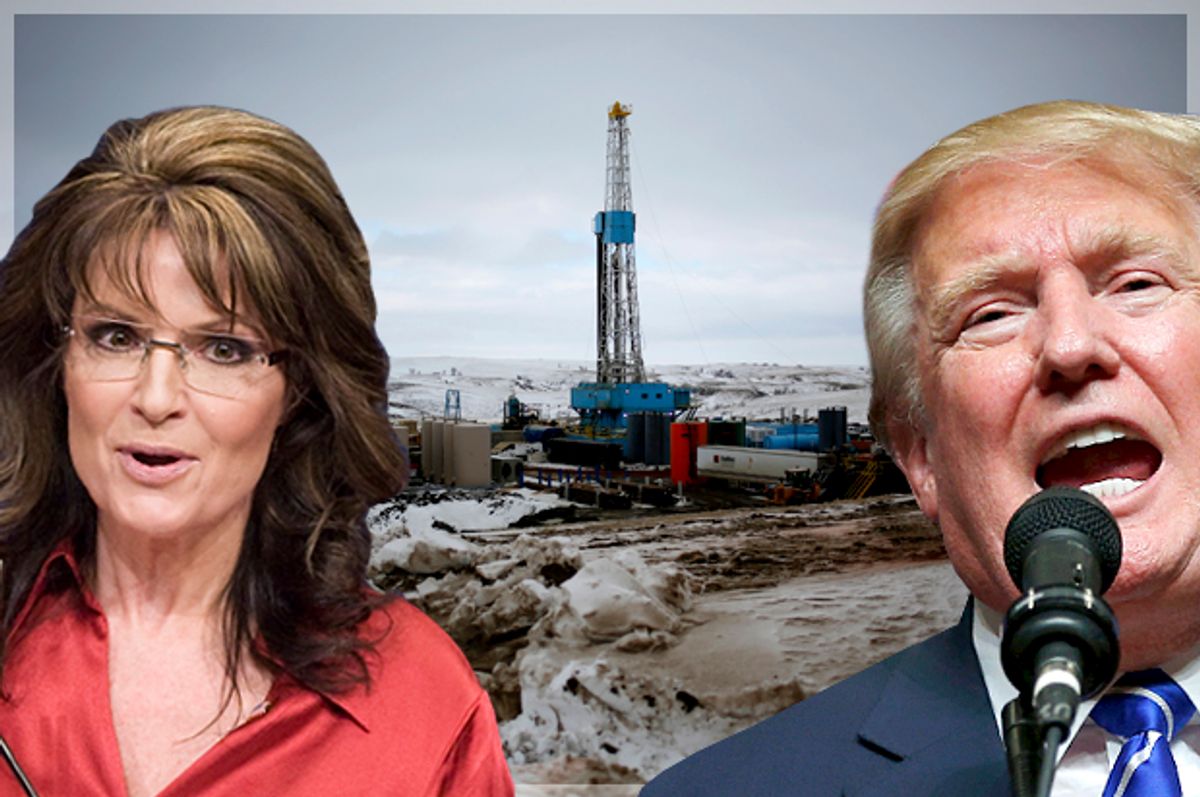 When President Obama officially killed the Keystone XL pipeline in November 2015, that should have been the end of it. But last week Donald Trump promised to raise the pipeline from the dead if he is elected president.

Trump chose to make his remarks in the heart of America’s drill-baby-drill demographic in Bismarck, North Dakota. “I’m saying yes, we will absolutely approve it,” Trump said.

Trump also promised to get rid of Obama’s measures to reduce emissions, cancel the Paris climate agreement, rebuild the coal industry, and support fracking. Trump didn’t clarify his position on manmade climate change, but he has said in the past that he is not “a great believer,” and that manmade climate change is “a total hoax,” “bullshit” and a concept “created by and for the Chinese in order to make U.S. manufacturing non-competitive.”

It’s difficult to determine what Trump actually believes and what he’s saying merely to pander to his audience of the day. (This time, it was to an audience of oil executives at the Williston Basin Petroleum Conference in North Dakota, where he wanted to pick up unpledged delegates to secure the nomination, which he did.) The sincerity of Trump’s climate denial is brought into question by the fact that he is applying for permission to build a seawall in Ireland to protect one of his golf courses from rising sea levels.

But as confused as Trump may be over climate change, he more than most politicians understands the usefulness of symbols in an election campaign, whether it’s his Reagan-era “Make America Great Again” slogan or his Mexican-American wall. Trump’s call to build the pipeline is a symbol to fossil fuel interests and free market ideologues that he won’t be a pushover to environmentalists.

The fight over the Keystone XL has always been a symbol. The pipeline first achieved its symbolic status in 2010 when climate change advocates decided they needed a winnable fight against the fossil fuel industry. The pipeline, for environmentalists, would be a battleground on which they’d fight to get the country, for the first time, to reject an energy project out of concern for climate change. Environmentalists hoped that the rejection of the pipeline would become a symbol marking the beginning of the end for old school fossil fuel projects.

Conservatives realized what was at stake. It wasn’t the 35 permanent jobs that would have been created by the pipeline. Nor was it about the pipeline’s potential impact on our economy or energy independence, both of which would have been negligible. The pipeline, rather, was a symbol of the unfettered free market economy that conservatives and libertarians would have us believe can only be a source of good. Conservatives would lose a major ideological battle if the president were to side with the climate change movement and legitimize their calls to keep natural resources in the ground, build an international coalition to impose greenhouse gas limits, and contain the evils of the free market with stricter regulations. These far-left measures would be nothing other than abominable to right-wing true believers.

Conservatives know that their core economic principles are at risk of becoming obsolete if enough people get worried about manmade climate change and start calling for serious government action. Instead of changing with the times, though, it seems that Republicans’ only strategy is to call for reviving dying industries such as coal and dead projects like the pipeline, all while manufacturing widespread doubt by loudly rejecting the science behind climate change. (In 2014, PolitiFact identified only eight out of 278 Republicans in Congress who had made on-the-record statements acknowledging the existence of manmade climate change.)

It would be nice if Trump, the “anti-establishment candidate,” would do something other than warmly embrace the Republican establishment’s central policies and talking points. But Trump is the latest in a long line of Republicans to blow hot air about jobs and the economy and energy independence when promoting fossil fuel projects with the hope of rolling back regulations to enjoy a few more years of deregulated, scorched-earth economics.

Meanwhile, environmentalists have moved on, and the pipeline, for them, has died and become a symbol of the past.