"Game of Thrones" recap: "Violence is a disease—you don't cure it by spreading it to more people" 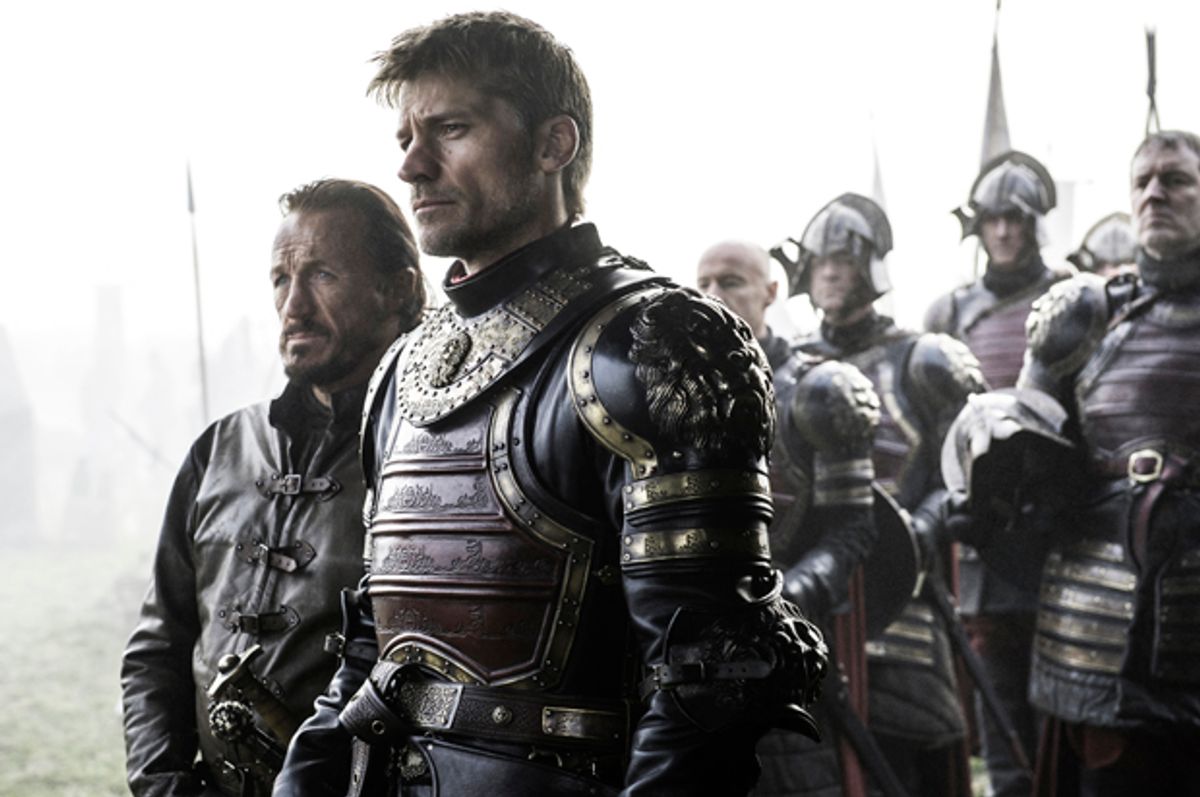 Jerome Flynn and Nikolaj Coster-Waldau in "Game of Thrones" (HBO)
--

The title of this seventh episode—“The Broken Man”—could refer to so many beloved (and not so beloved) inhabitants of Westeros. There is, of course, Theon Greyjoy, who has been broken in body and spirit by torture and dismemberment. Jon Snow now knows nothingness—that there are no seven Heavens awaiting us after death, no tearful family reunions. And Brynden “The Blackfish” Tully, who has survived the wholesale slaughter of his family, is preserving whatever he can of the Tully clan’s pride and purpose in his fight to reclaim Riverrun. The Blackfish’s opponent, Jamie Lannister, has been conscripted in this fight against his will after his humiliation at the hands (or should I say the bare, dirty feet) of the High Sparrow. But the title most likely and most literally refers to Sandor Clegane, aka The Hound, who was last seen in season four, battered and broken at the bottom of a cliff, howling for Arya Stark to put him out of his misery.

The full brunt of his vicious brawl with Brienne of Tarth is borne out on his (further) scarred face (again, kudos to the make-up department for finding a way to layer on more damage without overwhelming actor Rory McCann’s ability to send worlds of sorrow, rage, and vulnerability spinning in his dark eyes), and in his stiff, shuffling gait. And yet he enters the screen determined to help his rescuer, a septon of The Seven (played with an immaculately careworn cragginess by Ian McShane), construct a giant scaffold — the beginnings of a temple, perhaps, a home. Though the priest’s flock members seem genuinely unnerved by the lumbering man — whose history as one of the most feared warriors in Westeros is evident in his axe swing — the priest tries to banter gently with him, to bring him into the fold and back into life. He asks the Hound what brought him back from the very threshold of death. The Hound’s answer is blunt: “Hate.”

His response is heartening for fans who are placing their bets on the Cleganebowl (and with Sandor as a devotee, in name at least, of the Seven, the odds of him serving as the champion of the faith are quite good), but it also reveals something about why we keep watching "Game of Thrones" even as it finds new ways of breaking our favorite characters: No matter how bowed and cowed, how violated and scattered they may find themselves, the characters will try, often against hope, to fight back. "Game of Thrones" has delivered, time and again, the cold catharsis of oblivion (and so it’s fitting that the Red Wedding, specifically the graphic death of Catelyn Stark, is referenced in this episode), but it also gives us portraits of resilience.

Margaery Tyrell’s performance of faith is a masterwork worthy of a Rembrandt (if you need me, I’ll be on the rooftop, crowing, “I told you so!”); she smiles serenely and flawlessly quotes the Book of the Mother back at the High Sparrow — all so that she can continue to wear the crown. Still, there are fractures in her façade: She can’t bring herself to bed her husband (and one could hardly blame her for not being turned on by the spineless boy-child who left her to rot). The High Sparrow tells her, in so much poetical language, to grit her teeth and think of London, because the king needs an heir — proving that, even in the seven kingdoms, organized religion privileges policing a woman’s reproductive choices over, say, feeding the poor. Natalie Dormer does such precise, subtle work in conveying Margaery’s struggle to appease the Faith Militant and retain whatever she can of who she was before she was drug off into that cell; there is genuine sorrow in her face as she embraces her grandmother, and genuine pathos in the crude rose drawing she slips in Lady Olenna’s pocket. Though the title may be “The Broken Man,” the Queen of Thorns finds her own stem snapped as she prepares to return to Highgarden, knowing that her family line will wither on the vine; her only solace is that Cersei, the architect of her family’s great suffering, has also lost.

If Margaery is putting on the performance of a lifetime to save her own life, then her one-time companion in King’s Landing, Sansa Stark, has abandoned all subterfuge in favor of hammer-hard candor. She, Jon Snow, and Ser Davos are on a roadshow of recruitment, trying to rally the Stark loyalists to their efforts to re-take Winterfell from Ramsay Bolton — only to find them few and far between. Though Ser Davos does manage to win the allegiance of Lyanna Mormont (who, played by Bella Ramsey, rivals a young Arya Stark as the pixie bad-ass par excellence), that allegiance comes after the ten-year-old chieftain throws some grade-A shade at Sansa: “Lady Sansa is a Bolton. Or is she a Lannister…” Sansa’s response—“I did what I had to do to survive”—might well be a house sigil for everyone, everywhere, who has endured abuse and assault. It’s important that the show acknowledge that not all heroines swing swords or ride dragons, that doing whatever gets them from one minute to the next is sometimes the bravest feat imaginable. Clearly, Sophie Turner relishes playing Sansa’s steeliness; her thousand-yard stare manages to seem simultaneously powerful and chilling. She might well give the same response to that question the priest of the Seven posed to the Hound. Why does she keep going? Hate.

While I can appreciate the show’s efforts to build the push against the Boltons around Sansa’s quest for a well-earned vengeance, I can’t help but feel that the writers are neglecting Jon Snow. What must it feel like to prepare for war against a particularly brutal foe when you know that the only thing awaiting you once the blade finds your neck is just a black oblivion? And what does it mean to rally these houses around a family name that was never really yours? When considering how the show has so far squandered Jon Snow’s resurrection, I can’t help but think of how "Buffy the Vampire Slayer" handled Buffy’s return from the dead—she was a broken woman, bitterly seeking meaning in the chaos of demon-slaying and violent, house-quaking sex with an enemy. Right now, Jon seems like an appendage to Sansa’s story. Which is in some ways a fascinating and truly subversive reversal of traditional gender roles, but in other ways a sad waste of a unique story—especially when we consider the ways that the writers and performers can add depth and dimension to characters who may be seen as preening or hollow.

Take one Jaime Lannister, the Kingslayer shown to have a heart of, if not Lannister gold, then at least highly-burnished brass, under his armor. If Jon Snow was the square-jawed arbiter of All That is Right™, then Jaime was the cleft-chinned charmer, a man with the right name, but no honor. After his own breaking-down (and the lopping off of his hand), Jaime has ripened into a man of empathy; his first act after riding into Riverrun is to demand that that the Freys offer their prisoner, poor Edmure Tully, a hot meal and a bath — he obviously remembers his time as a prisoner well. The easy affection he has with Bronn proves that HBO shouldn’t have given up on #TrueDetectiveSeasonThree quite so soon — it also provides a much-needed sense of levity to the moments before his parlay with the Blackfish. The Blackfish doesn’t offer some rousing speech about the enduring power of family or the importance of his legacy; he says, simply, that he was born in this castle, and he’ll die in it. And Jaime has matured enough over the course of six seasons to know that this grim resignation makes the Blackfish a deeply formidable foe.

Though the Blackfish’s losses would make him the most tragic figure in any other episode, here, that designation belongs to Theon Greyjoy, who can’t quite live up to Hemingway’s axiom of strength as being “strong in the broken places.” Theon is all angst and jangled nerve; his PTSD-induced panic at a whorehouse is expertly conveyed by director Mark Mylod’s decision to frame him in a claustrophobic close-up, and by Alfie Allen’s understated skittishness. We see that he is trying, so hard, to be the Iron Born his sister knew; and that Yara, in her (horrible, terrible, very no-good) way, tries to console him: “I need you. The real Theon Greyjoy…You escaped, you hear me? You got away, and you’re never going back. We’ll get justice for you.” The truth is that she is sitting across from the real Theon Greyjoy, the wreck who is left after trauma—who may pick up his sword again, but will never, ever be made whole, even if he does get the justice of seeing Ramsay’s head on a spike. The real Theon Greyjoy is the living embodiment of all the violence he’s doled out, and all the violence he’s survived.

Arya Stark’s choice to be “the real Arya Stark” and not No One, also entails brutal consequences. Though she may believe some sweet Braavosi coin can book her safe (and with a cabin, dare we say, swag) passage back to Westeros, she is unable to escape the Waif’s blade. We last see her roaming the marketplace, gasping and bleeding, wandering off God knows where because nowhere is safe. Arya’s plight in some ways mirrors the priest of the Seven’s final words to her former captor and protector, the Hound; the priest tells a story of his own days as a soldier, of slitting a young boy’s throat in front of his mother, and how, in time, he learned to endure the shame by putting down his sword and picking up the holy book. But even if we renounce violence (as Arya did in refusing to kill the actress Lady Crane)—violence has a way of cycling back to us.

“Violence is a disease,” the priest says, after the Hound challenges him for not responding to the Brotherhood without Banners men who ride up to threaten them. “You don’t cure it by spreading it to more people.” This is the gospel that has given him life—and lost him his life. When the Hound comes upon the preacher’s hanged corpse dangling in the center of the scaffold, that pale skeleton of a temple, a home, he loses whatever hope he may have had for a quiet life, where he didn’t have to be that man who’s been broken down—not only by the crash of fist into face, or the rush of his body hitting the rocks, but by the weight of the cruelties he’s committed. There will be no tranquility, no peace, in his re-emergence into the world. This broken man is assembling himself all over again, and even if the glue holding him together is hate, his walk has become certain and strong—and the axe he lifts up will be raised again to bring about a cold catharsis of oblivion.