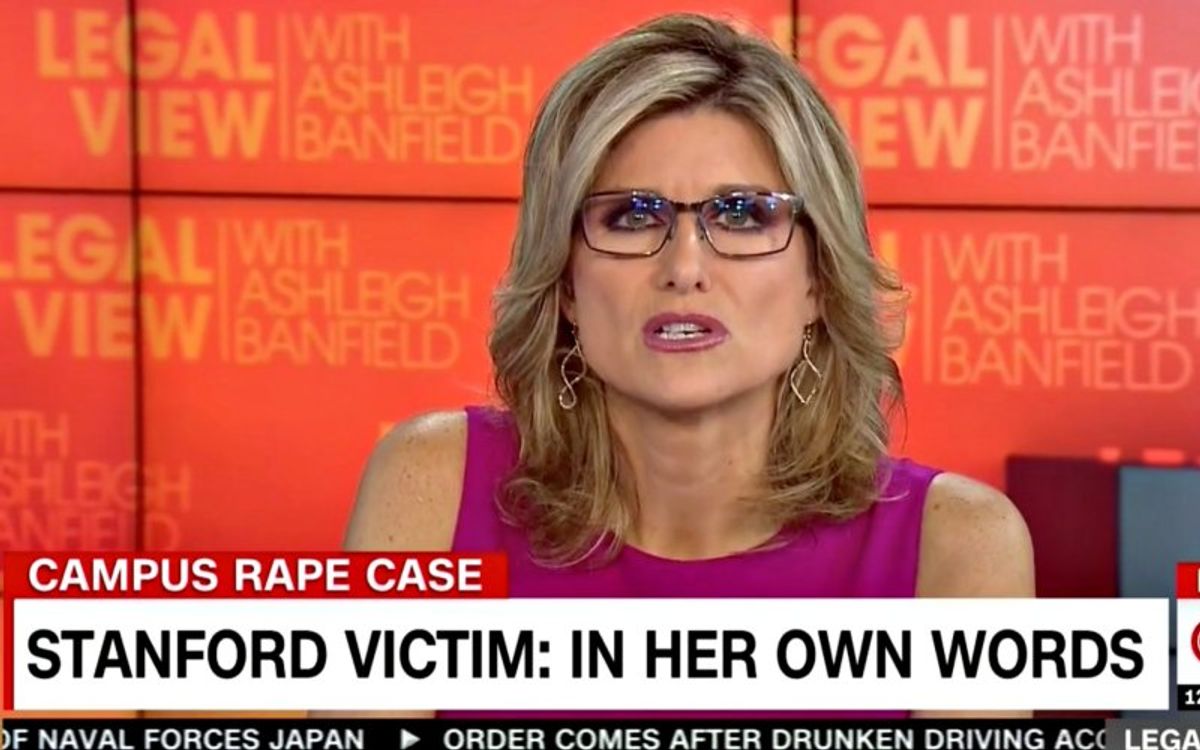 On her show "Legal View," Banfield read aloud the 13-page victim impact statement from the now 23-year-old woman raped by Brock behind a dumpster on Stanford's campus in January of 2015.

"For a while, I believed that that was all I was. I had to force myself to relearn my real name, my identity. To relearn that this is not all that I am. That I am not just a drunk victim at a frat party found behind a dumpster," the women wrote in a poignant letter published by Buzzfeed on Thursday. Her letter had been read by more than 5 million people as of Monday morning.

Turner's case has caused a national uproar because of his shockingly light 6-month sentence to jail, not prison, on advisement of a Santa Clara County probation officer.

“His life will never be the one that he dreamed about and worked so hard to achieve. That is a steep price to pay for 20 minutes of action out of his 20 plus years of life,” Turner's father wrote in an outrageous letter to Judge Aaron Perksy, asking for leniency on his son's behalf. Saying that “a prison sentence would have a severe impact on" Turner, Judge Persky seemed to agree with the senior Turner's dismissal of his son's rape, sentencing him to only 6 months on charges that carried a maximum penalty of 14 years in prison.

"I think he will not be a danger to others,” the judge asserted.

"I fully respected his right to a trial, but even after twelve jurors unanimously convicted him guilty of three felonies, all he has admitted to doing is ingesting alcohol," Banfield said, reciting the survivor's words.

"The night the news came out I sat my parents down and told them that I had been assaulted, to not look at the news because it’s upsetting, just know that I’m okay, I’m right here, and I’m okay. But halfway through telling them, my mom had to hold me because I could no longer stand up," Banfield read, chocking up.

Over the course of 23 minutes, Banfield got emotional at multiple times while reading the letter.

"Lastly you said, I want to show people that one night of drinking can ruin a life," Turner's victim recalled of his defense.

"A life, one life, yours, you forgot about mine," Banfield read.

"Let me rephrase for you, I want to show people that one night of drinking can ruin two lives. You and me. You are the cause, I am the effect":