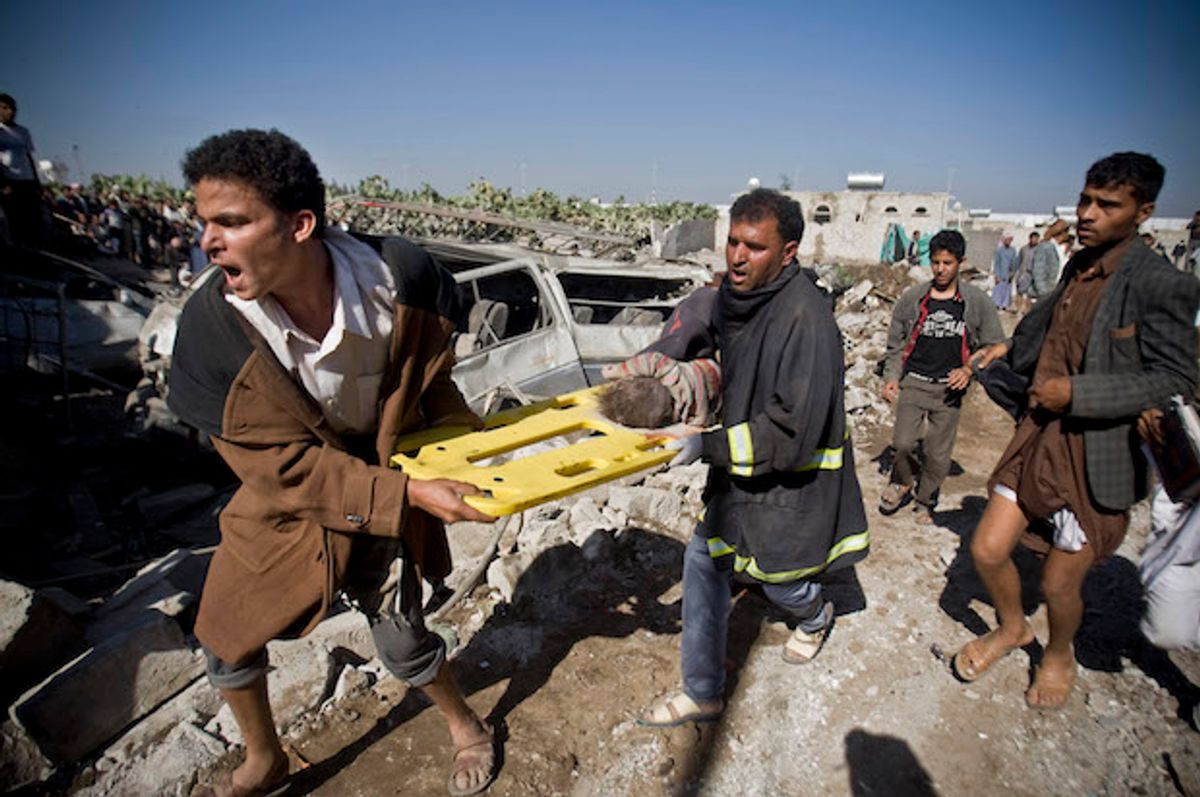 Yemenis carry the body of a child they uncovered from under the rubble of houses destroyed by Saudi airstrikes near Sana'a Airport, Yemen on March 26, 2015 (AP/Hani Mohammed)
--

Amnesty International released a scathing statement on Tuesday condemning the United Nations "after it shamefully caved in to pressure to remove the Saudi Arabia-led military coalition from the UN’s list of states and armed groups that violate children’s rights in conflict."

An annual report by the U.N. special representative for children and armed conflict, published on June 2, concluded that the U.S.-backed, Saudi-led coalition was responsible for 60 percent of child deaths and injuries in the war in Yemen in 2015.

In the report, U.N. Secretary-General Ban Ki-moon warned, “Grave violations against children increased dramatically as a result of the escalating conflict.”

A spokesperson for Secretary-General Ban announced on Monday night, however, that Saudi Arabia would be removed from the list.

Amnesty says this removal "was a direct result of diplomatic pressure from Saudi Arabia."

"The credibility of the United Nations is on the line," the leading human rights organization wrote in its trenchant statement.

“It is unprecedented for the UN to bow to pressure to alter its own published report on children in armed conflict," remarked Richard Bennett, the representative and head of Amnesty’s U.N. office.

"It is unconscionable that this pressure was brought to bear by one of the very states listed in the report," he added.

This is the first time the U.N. has ever removed a state from such a list — although, Amnesty noted, the U.N. "was widely criticized for backing off from including Israel in last year’s report, following many credible allegations of hundreds of children killed and thousands injured in the 2014 armed conflict in Gaza."

The U.N. claims the removal is temporary. It says it is reviewing the report’s findings in cooperation with Saudi authorities.

But Saudi diplomats to the U.N. quickly characterized the change as "an 'irreversible' moral victory," Amnesty reported.

The June 2 U.N. report found that the Saudi-led coalition killed at least 510 children in Yemen, and wounded another 667.

Past U.N. reports have also confirmed that the U.S.-backed coalition is responsible for roughly two-thirds of civilian casualties in Yemen.

Since March 2015, a coalition of Middle Eastern nations led by Saudi Arabia and armed and supported by the U.S. and U.K. has waged a brutal bombing campaign in Yemen, the poorest country in the Middle East.

The Saudi-led coalition is using weapons and intelligence provided by the U.S. and U.K. American and British military officials, in fact, are physically in the room with Saudi bombers, and have access to a list of targets.

In September, Saudi Arabia, one of the world's most repressive, draconian and extreme regimes, was selected to head a U.N. Human Rights Council panel. The U.S. State Department said it "welcomed" the decision, given "we’re close allies."

Western governments in the U.N. Human Rights Council subsequently dropped plans for an international inquiry into human rights violations in Yemen, instead essentially allowing the Saudi-allied, U.S.-backed Yemeni regime to investigate itself.

Amnesty stressed in its statement that it "has repeatedly documented violations of international human rights and humanitarian law by coalition members during the conflict, including against children."

Human rights organizations including Amnesty and Human Rights Watch, along with the U.N., have reported Saudi-led airstrikes on civilian neighborhoods, hospitals, schools, weddings, a refugee camp, a humanitarian aid warehouse and more.

Rights groups say the coalition has dropped internationally banned cluster bombs on civilian areas. They have documented use of at least six different types of cluster munitions, made by the U.S., U.K. and Brazil. These widely prohibited weapons have killed and maimed children.

A May report by Amnesty furthermore detailed how, even when the war ends, Yemeni civilians returning to their homes are “at grave risk of serious injury and death from thousands of unexploded cluster bomb submunitions.”

Amnesty says children made up at least one-third of the civilian deaths in the 32 apparently illegal airstrikes it has documented since the coalition bombing began in March 2015.

It blasted the U.N. for its "blatant pandering" to the Saudi monarchy.

“Blatant pandering such as this undermines all of the UN’s work to protect children caught up in war," said Bennett, the representative and head of Amnesty’s U.N. office.

"Secretary-General Ban must not succumb to pressure and undermine the important role of his own Special Representative. By doing so he also damages the credibility of the UN as a whole," he added.

“This is a stark example of why the UN needs to stand up for human rights and its own principles – otherwise it will rapidly become part of the problem rather than the solution.”

Bennett concluded, “the Secretary-General has set a dangerous precedent that will put the lives of children in countries in conflict at even greater risk.”