Hillary Clinton, Democratic nominee: Now the left begins to bargain with a painful reality -- and a hopeful future

Yes, Bernie can and should push onward, even though it's over. It's time to face defeat, and fight for the future 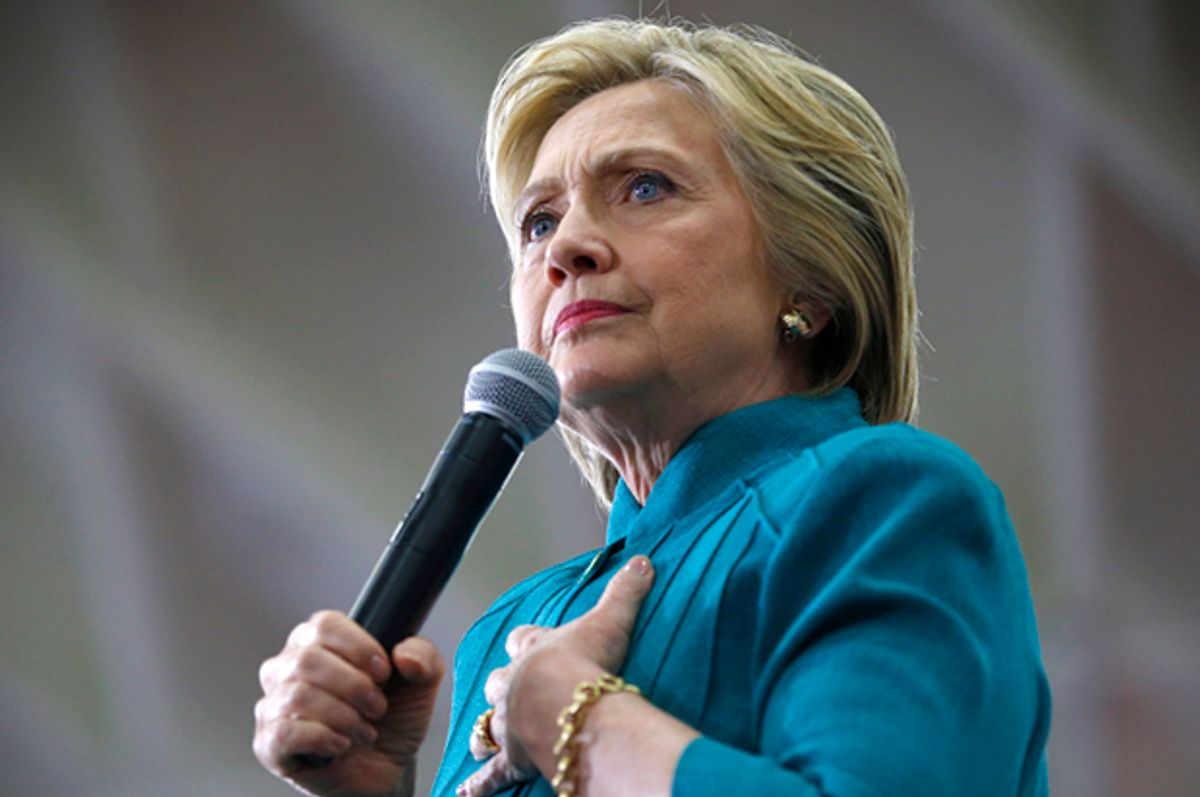 It tells us something about the current state of the Democratic Party that the boring, normal candidate has defeated the exciting outsider. Whether it tells us something good or bad — for the party, for politics in general and for the country — is entirely a question of perspective. As you may have noticed, the Republican primary campaign had a somewhat different outcome. So whatever you can say about the impending general-election campaign, which may well be one of the most dire and distasteful in American history, it will definitely offer a stark contrast. I have argued repeatedly during this campaign season that the Democrats face their own version of the implosion and reconfiguration that has turned the Republican Party upside down and inside out in 2016, resulting in a nominee who stands for few of the party’s core beliefs and that its established leaders barely even pretend to support.

That’s still true, but with the nomination of Hillary Clinton now a fait accompli, it’s clearer than ever that Democrats and Republicans are in different states of institutional disrepair, and that their future trajectories will be different too. Even before the votes were cast in this week’s California and New Jersey primaries, the Associated Press and various other news organizations have calculated that Clinton has now surpassed the magic number of 2,383 delegates and will be the Democratic nominee. This was clearly an orchestrated maneuver, designed to take the sting out of a possible Bernie Sanders victory in California, the last and biggest prize on the primary calendar. That doesn’t make it untrue.

For “progressives” on the Democratic left (or to the left of that left), who saw an opportunity this year to out-Trump the populist right by retaking the party from the pro-corporate center-right forces that have controlled it since the Bill Clinton era, the bargaining process now begins. I don’t mean the behind-the-scenes negotiations that began this week with President Obama’s phone call to Bernie Sanders and that will inevitably end with Sanders endorsing Clinton, no matter how unthinkable that remains to some of his supporters. Those are interesting too, but I’m talking about the stage of the Kübler-Ross grieving process known as “bargaining,” as many of us begin to make our peace with what happened in this year’s Democratic campaign and look toward the future.

For many Sanders supporters, and not just the younger generation for whom his campaign was a political awakening, deferring the dream of “political revolution” — or at least major reform, which is really what the Vermont senator has proposed — will be exquisitely painful. But Hillary Clinton herself is not the problem, although she clearly stands for and stands with the Democratic establishment Sanders sought to overthrow.

I think the potential benefits and obvious hazards of President Clinton 2.0 can be summed up in two sentences. She will probably be a pretty good president when it comes to domestic policy, and quite possibly more effective than Obama in negotiating with a GOP-led (or divided) Congress and enacting legislation. She will probably be a dreadful president when it comes to foreign policy, overseas wars and what is euphemistically called “national security,” quite likely more belligerent than Obama. It will be necessary to remain vigilant on all those fronts, to demand accountability and sometimes to fight her tooth and nail. Clinton doesn’t get a pass on drones or surveillance or secret bombing campaigns because she has a “D” after her name, or because she is preferable to a hateful, racist charlatan whose expertise derives from reality TV, educational scams and mediocre real-estate deals.

OK, that was actually four sentences, containing a bunch of modifiers and switchbacks. But let’s back up for a second: I recognize that many of Sanders’ most fervent supporters are nowhere near that point in the bargaining process. Questions about how and whether to support someone in the fall campaign whom they have seen for the past year as an enemy and an obstacle, and about how to reckon with her in the White House, still seem impossible. Sanders has not yet conceded defeat, and certainly won’t do so until later this week, after the results from California and New Jersey settle in. He may well withstand the full-court press from Obama and the rest of the Democratic hierarchy and refuse to concede before next month’s Democratic convention in Philadelphia. That too is part of the bargaining process.

I believe it’s fine and indeed entirely reasonable for Sanders to push on to the convention — but not because he has any chance of winning. He doesn’t, but that’s not the point. (I would argue that hasn’t been the point since Clinton won in Illinois and Ohio, several weeks back, but let’s save the wonky autopsy for some other time.) As Clinton noted in her Monday evening interview with Rachel Maddow on MSNBC, the Sanders campaign is now pushing past all possible partisan logic. She has received far more primary votes than Sanders has, and even if we eliminate the infamous superdelegates, she holds a lead of about 290 among pledged delegates chosen by voters. No matter who wins in California on Tuesday night, on Wednesday morning she will still hold a large lead, and will have moved well past the 2,383 threshold.

Grading Clinton strictly on performance, I give her high marks for the Maddow interview, which had also clearly been calibrated for this historic occasion. If this isn’t an inherently sexist term (or even if it is), Clinton was statesmanlike. She declined to let Maddow goad her into gloating or celebrating (although that’s clearly coming), and she made only bland, welcoming remarks about Sanders and his supporters. She was grave and serious when decrying Donald Trump’s hateful comments about the Latino judge in the Trump University lawsuit, saying it was one of many reasons why Trump was not qualified to be president. I’m not sure how this strategy will play out in the long haul, but it’s clearly the tactic Clinton’s team has settled on to defang the Trumpian monster: Position her as the responsible adult, scolding the vulgar and unruly child who ought to be sent to his room. (If you understand American politics as a cable drama, that’s the right choice. But if it’s a network sitcom, in which parents are subjected to ritual humiliation, then it’s likely to backfire.)

Clinton is correct that the primary race between her and Obama in 2008 was closer than this one, and that she trailed by fewer pledged delegates (about half her current margin over Sanders) when she threw in the towel in June of that year. She pronounced it “perplexing” that Sanders might push on to the convention in the face of obvious defeat, and that he might yet attempt to sway superdelegates to defy the decision of a clear majority of the Democratic electorate. “That’s never happened before,” she said, “and it’s not going to happen this year.” All that is true, but what it tells me is that Clinton fails to understand the point of the Sanders campaign or, more likely, is deliberately choosing to ignore it.

Obama and Clinton were very different in 2008 when it came to semiotics and symbolism, but in terms of actual policy and philosophy they were barely distinguishable. (Clinton supporters argued at the time, with some justification, that on economic issues she was slightly to Obama’s left.) Symbolism has played a big role in the Clinton-Sanders race too, but as Sanders will tell you over and over and over again in his endlessly repeated stump speeches, on a wide range of issues I hardly need to lay out here, they are ideological opponents in a way Obama and Clinton never were. I absolutely bottom-dollar guarantee you that Bernie Sanders will not end up as Secretary of State, or in charge of any other meaningful agency, under a coming Clinton administration.

Clinton’s cautious language in the Maddow interview suggests that she knows all that now. It is of course generically true that she and Sanders have more in common than either does with Trump, and that at some point they will forge an alliance to defeat him. But Bernie Sanders, who came closer to pulling off an internal coup within the Democratic Party than anyone would have believed possible a year ago, needs to push on just a little longer, in order to bring his own bargain with his supporters to a conclusion.

Sanders needs to assure his followers that this race was not like the 2008 race, or any other in recent memory, and that if it ends with an inevitable defeat and an inevitable truce, it does not end in capitulation. Hillary Clinton’s 2016 victory is not the victory of Clintonism. If the fight for the future of the Democratic Party is suspended for the moment, at least at the presidential level, it is not over. Indeed, it has barely begun. The final stage of the Hillary Clinton bargain lies not in surrender, or in accepting a return to politics as usual. It lies in the resolution to stop fighting now, in order to fight on another day.