Clinton's shining moment at NY rally: She celebrates at feminism-heavy event — as many stunningly belittle her victory

Clinton and her supporters celebrated her historic victory Tuesday, even if many refuse to acknowledge it 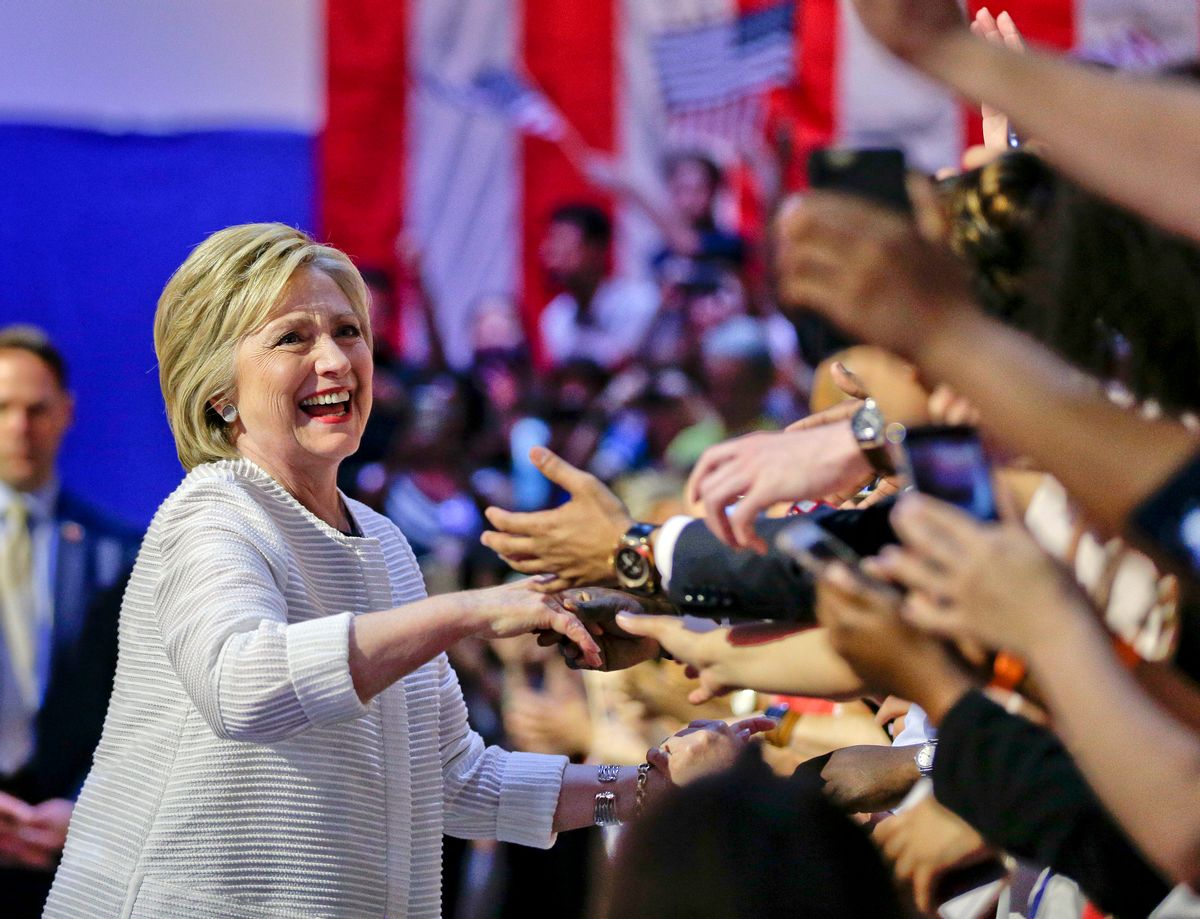 All election cycles get mired in the day-to-day churn, but 2016, with its contentious Democratic primary and the daily what-did-Donald-say horror story, is worse than most. So much so that the huge historical impact of Hillary Clinton securing the Democratic nomination — making her the first woman in history to be a major party presidential nominee — only seemed to hit supporters emotionally on Tuesday night, when her all-but-certain nomination became an indisputable mathematical fact.

For a brief, shining moment, everyone stopped talking about the latest stupid thing Donald Trump said or what byzantine argument about superdelegates Bernie Sanders is trotting out today. Instead, they soaked in the fact that we were really, truly witnessing history here.

Not only is a woman a major party nominee for president, but she is probably going to win. There have been queens and female world leaders before, many with immense power. But Clinton is making a play to be the most powerful woman ever elected to public office in the history of our country, arguably the most powerful woman elected to public office in history. For a moment, there was a pause as that fact sunk in.

The Clinton campaign, however, was quite aware of what this moment meant and built the rally around it, framing her win in terms so explicitly feminist that it was truly shocking. This was not the tepid Clinton campaign of '08, where the candidate was fearful of even mentioning gender, lest people clue into the fact that she was a woman. This is a Clinton who is owning and embracing feminism, making her victory a symbol of how far women really have come.

The intro video set the tone, with images of the feminist struggle, from the suffragists marching for the vote to Shirley Chisholm's historic attempt to get the Democratic nomination to the pro-choice activists who rallied against Texas's abortion law. Then Clinton herself stepped on stage and opened her speech with an unapologetic feminist history, invoking Seneca Falls and the fight for women's suffrage.

"Thanks to you, we’ve reached a milestone," Clinton said to deafening cheers, noting that it's the first time in "our nation’s history that a woman will be a major party nominee."

Invoking the struggles of the feminist movement going back to 1848, when the Declaration of Sentiments was drafted, was a brave but crafty move. Brave because there is still a lot of carping and nastiness towards feminism in our society, and more cautious politicians might fear aligning themselves with the movement.

But, despite this risk, it's the smart move to make. The residual belief that women are somehow less capable and intelligent than men remains Clinton's major obstacle, especially against Trump, a man so profoundly unqualified that sexism is the only real justification for voting for him. Invoking this feminist history sends a powerful and inarguable message: Women are smart and strong and capable of doing great things, even when the odds are stacked against them.

Supporters I spoke with at the rally were certainly keyed up about witnessing history.

"This is a big deal," supporter Clay Gish told me, glowing with excitement. "Two-hundred-and-forty years, and now we have the first woman candidate from a major party."

"Hillary is incredibly smart," Spengler said. "It has always made me mad how they have made it so difficult for her. But I feel confident she is going to take this country as it is and make it great."

"She is very qualified," Krishnamurthy agreed. "She's served the public for 30, 40 years. She is more qualified than anyone and people still ask if she's a qualified candidate."

When I asked if they felt it was sexism that caused so many people to underrate Clinton's talents, all three women nodded emphatically, a chorus of hell-yeses that spoke volumes about why so many women have become eager Clinton supporters.

Citing Obama's historic victories, Valk said he was at the rally to celebrate "the progression of our common movement."

Valk, whose background was in LGBT organizing, objected to stereotypes that Clinton only appeals to older women. "What is neat about this rally is all the people from different ages."

He emphasized the diverse crowd and diverse groups coming together and noted that he was particularly stoked that "Clinton has mounted a historic ground game."

Mu, whose father worked in the State Department, gushed, "I just love the Clintons. I met them at the G7 summit when I was 14."

Mu also linked Clinton to Obama, noting that Obama was the first person she could vote for and now getting to vote for Clinton "makes me feel optimistic about living in America."

"Not only old white men live in the United States," Mu added.

As the 19th and 20th-century feminists that Clinton invoked during her rally could have told her, for women, victory never comes easily. Even though Clinton had smashing victories Tuesday — winning California in a blowout with 56% of the vote — that put her well over the top in both pledged and superdelegates, getting her victory acknowledged is still like pulling teeth.

This, for instance, was the headline at the New York Times Wednesday morning:

Here is the headline Barack Obama got under nearly identical circumstances: Winning the majority of delegates, a competitor who hadn't yet dropped out:

Granted, everyone knew, in 2008, that Clinton was a team player and would concede shortly, which is why the Times felt comfortable declaring Obama the victor.

But that just really proves the point, doesn't it? Apparently, the race isn't over until the white  guy, Bernie Sanders, says so, even if Clinton is winning on all fronts and with a more comfortable margin than Obama did in 2008.

But even if some in the mainstream media are cautious about admitting that Clinton won, the folks at the Clinton rally were not doubting for a moment that they were witnessing history. The words "history" or "historical" fell from the lips of nearly every person I spoke with and the air was positively buzzing with excitement.

At most rallies, the staff's efforts go into keeping the crowd pumped, because energies can flag after hours of standing around waiting for the candidate to speak.  But at this rally, the staff seemed to be dialing it down a little, turning off the TV screens so that people didn't go hog wild at every minor primary victory. There were more than a few people on the verge of tears.

The New York Times headlines can say what they want, but the people in the room that night know the story they'll always tell was they were there the night the first female president cinched the nomination. At least the New York Daily News gets it: