"I refuse to serve as an empire chaplain," Chris Antal wrote in an open letter to Obama blasting U.S. militarism 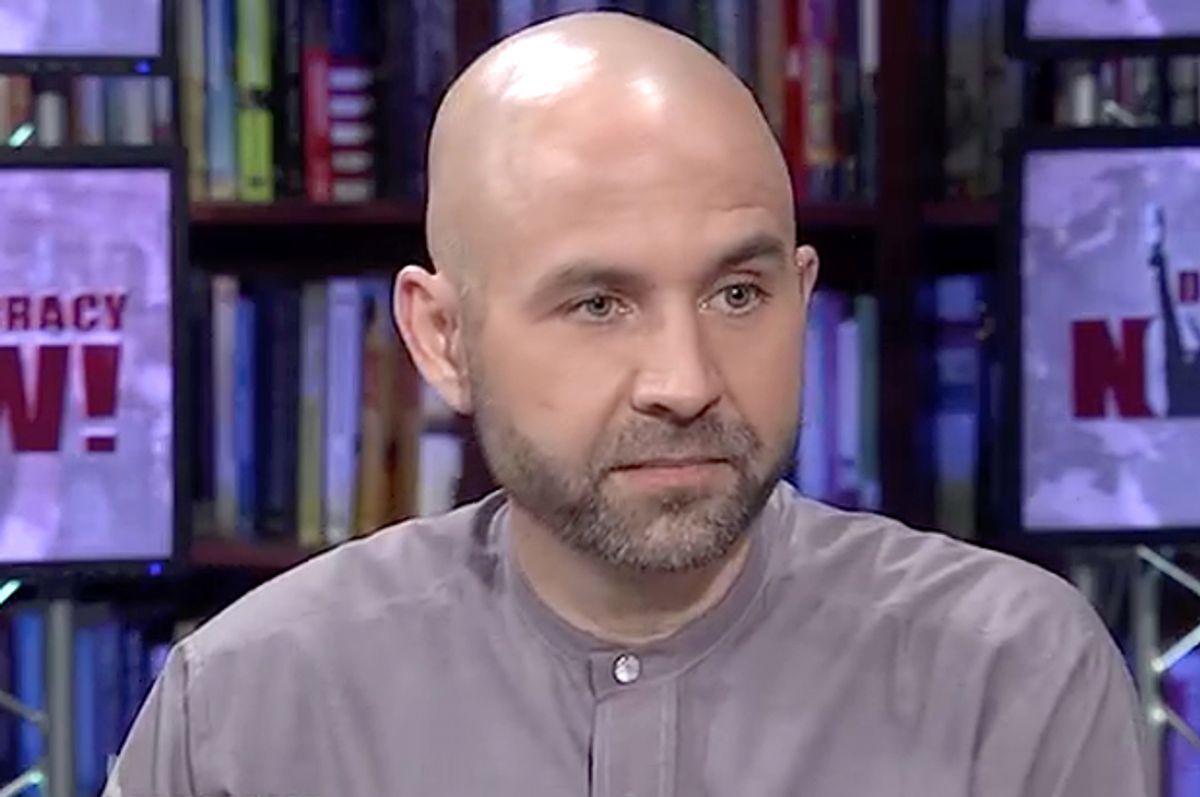 U.S. Army Reserve chaplain Chris Antal wrote an open letter to President Obama in April announcing his resignation. In the letter, which is embedded in full below, he excoriated the Executive Branch for giving itself "the right to kill anyone, anywhere on earth, at any time, for secret reasons, based on secret evidence, in a secret process, undertaken by unidentified officials."

He also blasted the Executive Branch for continuing "to invest billions of dollars into nuclear weapons, which threaten the existence of humankind and the earth."

"I refuse to support this policy of imperial overstretch," the U.S. Army minister concluded. "I resign because I refuse to serve as an empire chaplain."

"A Veteran’s Day Confession for America"

Antal served for eight years in the Army Reserve, five of those years as a chaplain. He spent two years on active duty, including roughly six months in Afghanistan. His second thoughts about the U.S. military began four years ago, on the other side of the ocean.

On Veterans Day in 2012, about six weeks into his deployment in Afghanistan, Antal, who is a Unitarian Universalist minister, delivered a fiery sermon at Kandahar Airfield.

"Most Merciful God, we confess that we have sinned against you," he declared. "We have made war entertainment enjoying box seats in the carnival of death consuming violence, turning tragedy into games raising our children to kill without remorse."

"We have morally disengaged, outsourcing our killing to the 1 percent, forgetting they follow our orders the blood they shed is on our hands too," Antal said in the sermon, titled "A Veteran’s Day Confession for America."

"We have sanitized killing and condoned extrajudicial assassinations: death by remote control, war made easy without due process, protecting ourselves from the human cost of war," he continued, in heated condemnation of the drone program.

"We have deceived ourselves, saying, 'Americans do not kill civilians, terrorists do,' denying the colossal misery our wars inflict on the innocent. The national closet bursts with skeletons," Antal proclaimed.

He subsequently posted the text of his sermon on a Unitarian Universalist website. "Because I think the issues I raise are of concern for a larger audience, for the whole nation, I made that available through a church website," Antal told Democracy Now in an interview on June 3.

Two days after posting the sermon on the website, Antal was contacted by an Army lawyer who had read the post. He was summoned to his commander’s office, who "told me that my message doesn’t support the mission," Antal recalled. "He told me that I make us look like the bad guys."

Antal's commander asked him to take the post down. He did so, yet subsequently faced a two-month investigation that ended with an official reprimand. It accused him of making politically inflammatory statements and released him from active duty in Afghanistan.

Explaining why he wrote the sermon, Antal recollected, "When I had witnessed drones, I had learned about practices that violate my sense of what is right. And I decided it was my prerogative as a religious leader to address that in the context of a religious service, a form of lamentation, a confession. And that is what I did in my sermon."

After the reprimand, in mid-April, Antal decided to voluntarily resign from the U.S. military in an act of protest.

I "eventually began to feel a role conflict between my role as a military officer and my role as an ordained minister," he told Democracy Now. "I couldn’t reconcile that role conflict, so I decided to resign."

Rev. Antal has not yet received a response to his letter to President Obama.

By resigning, Antal is sacrificing any benefits that he earned through his eight years of service in the military. Yet he believes taking a political and moral stand is more important than any benefits he may lose.

Antal stressed that the cornerstone of democracy is no establishment of an official religion. Yet, in the U.S., "we have in our nation an established religion."

"It’s not Christianity," Antal said. It "consists of the unholy trinity of governmental theism, military supremacy and an understanding of capitalism as freedom."

"As a religious leader, I feel it’s my prerogative to differentiate myself from this state-sanctioned religion and speak from my authentic tradition in a way that resists these national policies," he continued.

"That’s what I’ve done in offering my resignation and stating quite clearly that I will not serve as an empire chaplain. I will not lend religious legitimacy to this state-sanctioned violence."

Antal is also now politically active and outspoken about his experience. He is a founder of the Hudson Valley, New York chapter of the anti-war group Veterans for Peace, and has even taken his activism into the corporate sphere.

He called for "confronting some of the corporations that are profiting and that are lobbying our elected officials in order to influence the militarization of U.S. foreign policy." And he practices what he practices.

Antal bought one share of the military corporation Honeywell in order to attend its shareholder meetings and raise concerns to its executives. At a shareholder meeting in 2015, he interrogated CEO David Cote about the company's profiting from predator drones.

In the subsequent shareholder meeting, Antal asked about Honeywell’s profiting from nuclear weapons. "I asked Mr. Cote if he’d ever been to Hiroshima, because I’ve been there twice, and whether he had faced the horror that this technology produces," he said.

The former Army chaplain reiterated his criticisms of President Obama for his hypocrisy on nuclear proliferation.

As Salon has previously highlighted, President Obama visited Hiroshima, Japan in late May and pledged to work toward a nuclear-free world. Yet, at the same moment, the U.S.'s $1 trillion nuclear escalation with Russia and China threatens “to revive a Cold War-era arms race,” as The New York Times put it.

The Obama administration has made plans to spend $1 trillion dollars over the next three decades to revitalize the U.S. nuclear program, in a plan that “has been widely panned by critics as ‘wasteful,’ ‘unsustainable,’ ‘unaffordable,’ and ‘a fantasy,'” The Intercept reported.

"I was glad and proud of our president for visiting Hiroshima," Antal said. "However, I am disappointed that although he talks the talk of nuclear abolition, the actions of his administration are not consistent with what he’s saying."

I hereby resign my commission as an Officer in the United States Army.

I resign because I refuse to support U.S. armed drone policy. The Executive Branch continues to claim the right to kill anyone, anywhere on earth, at any time, for secret reasons, based on secret evidence, in a secret process, undertaken by unidentified officials. I refuse to support this policy of unaccountable killing.

I resign because I refuse to support U.S. policy of preventive war, permanent military supremacy and global power projection. The Executive branch continues to claim extra-constitutional authority and impunity from international law. I refuse to support this policy of imperial overstretch.

I resign because I refuse to serve as an empire chaplain. I cannot reconcile these policies with wither my sworn duty to protect and defend America and our constitutional democracy or my covenantal commitment to the core principles of my religion faith. These principles include: justice, equity and compassion in human relations, a free and responsible search for truth, and the inherent worth and dignity of every person.