Is Clinton's win a big moment for women and America? Of course — but the weirdness of 2016 has muted its impact 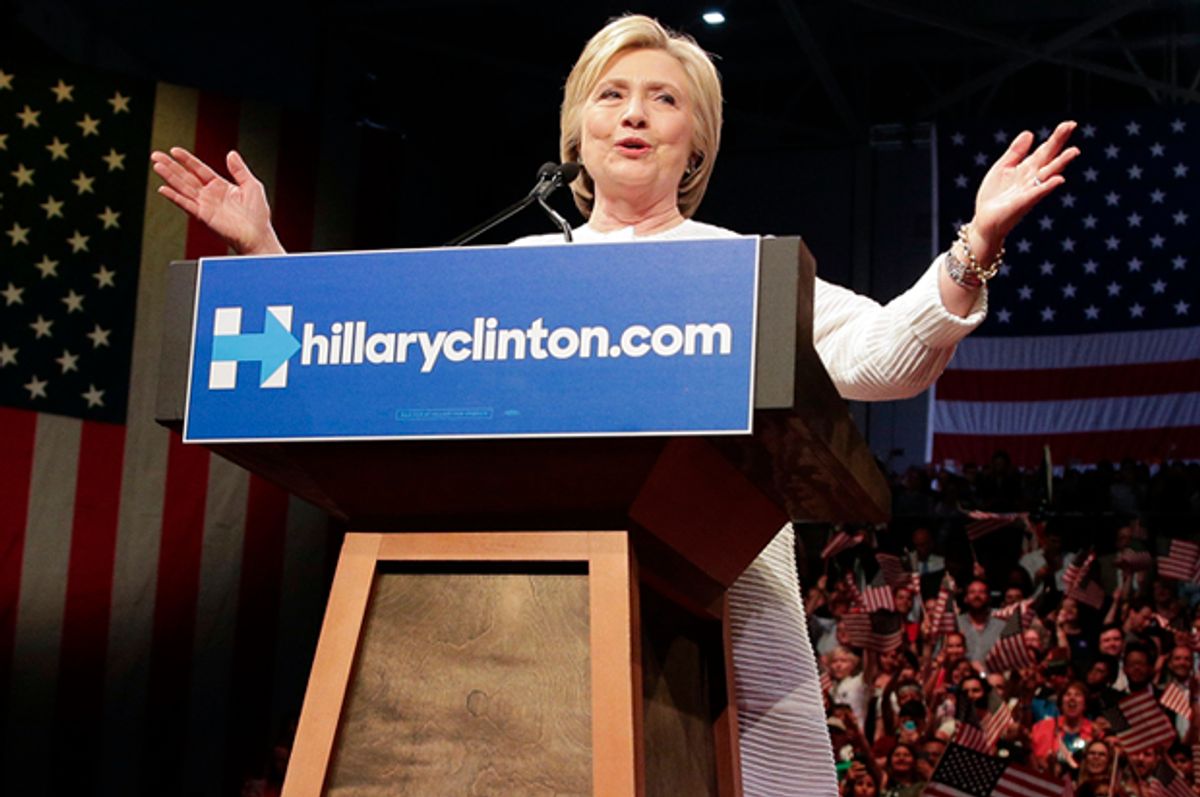 Hillary Clinton swept the two last big prizes on the primary calendar on Tuesday, leaving no room for ambiguity about who the Democratic nominee for president will be in 2016. As I wrote before the results were in (but when the long-term outcome was already obvious), now the bargaining process begins for Bernie Sanders supporters and the left. But let’s not overlook a momentous occasion that American women — and, hey, American men too! — have awaited far too long. Is this a historic moment for women, for politics, for the Democratic Party and for the nation? You bet. Is it sexist or condescending to suggest that its significance has been undercut somewhat by circumstance, by this year’s bitter ideological and political conflict, and by the sheer Hillary-ness of Hillary Clinton? That’s open to discussion.

Did Bernie Sanders cast a begrudging shadow across Clinton’s spotlight on Tuesday night, by refusing to concede the nomination even after it was clear that he had lost both New Jersey and California by large margins? (Defeat in the Garden State was expected, but a big win in California represented the Sanders campaign’s last gossamer strand of implausible hope.) Sure, I guess. Sanders could and should have sounded a bit more gracious on Tuesday, but if you haven’t figured this out, politeness is not really Bernie’s thing. But his poor Brooklyn etiquette won’t matter a week from now or a month from now or whenever the Sanders and Clinton camps eventually reach a peace treaty. And despite all the wailing and moaning on social media right now, it will have no effect on the fall campaign against Donald Trump, which is sure to possess its own delicious and horrible dynamic.

As many commentators have already observed, on the June day eight years ago when it became clear that Barack Obama would be the first African-American major-party nominee in our political history, the New York Times noted that fact in a front-page headline. Some news outlets took a similar approach on Wednesday, but the Times did not, noting in a secondary news-analysis headline that Clinton had “made history” without saying why. Is it somehow less significant, in historical terms, that one of our political parties has finally nominated a woman? That’s a subjective question, but I would say absolutely not. This is an enormous landmark. Is it less surprising that a woman will be nominated this year, and this woman in particular? Does that make it less newsworthy? Yes and yes — there’s just no way around that.

Obama’s unlikely ascension from first-term Illinois senator to Democratic nominee was an unforgettable political drama that transfixed the nation, and unfolded over barely six months. From his electrifying speech on the night of the Iowa caucus to his inaugural address on a famously frigid afternoon in Washington was barely over a year. Hillary Clinton, on the other hand, has been running for president since forever. Or at least that’s how it feels. She has clearly been moving this way since the day she conceded defeat to Obama eight years ago. If you’re feeling uncharitable, you could argue that Clinton has contemplated a triumphant return to the White House ever since the day she walked out the door as first lady in January of 2001. It’s not just that Clinton has already run one serious campaign that raised the prospect of the first female president; it feels as if she’s already been president, and now it’s happening all over again, as in a science fiction time paradox. Hillary Clinton is a supporting character in an episode of “Doctor Who.”

That’s facetious and unfair, but it’s not entirely facetious to raise the possibility that Clinton could end up as a supporting character in someone else’s story. That has been the great danger of 2016 for her all along. I am not suggesting that politics is actually reducible to drama — to a colorful narrative without real-world implications — but that’s how most voters undeniably perceive it, and that’s how elections play out in practice.

This year’s primary campaign between Clinton and Sanders exposed an important ideological and generational gulf within the Democratic Party’s unstable coalition, and the fact that Clinton found herself on the older, stodgier side of that divide unquestionably ate into the appeal of the first-female-president narrative. Even if you don’t much care for Clinton as a candidate or a person (as I do not), the rancor and frustration expressed by her supporters during this campaign was understandable: Was this immensely qualified woman (at least by every conventional standard) going to find herself once again on the wrong side of history, defeated by an unlikely male outsider with far less experience of politics and statecraft?

That obviously didn’t happen. While Bernie Sanders did much better than anyone would have imagined a year ago, and galvanized a new political consciousness most people in the party bureaucracies and the media had not even known existed, I don’t believe Clinton was ever in serious jeopardy. That’s easy to say now, of course, and there were clearly some inflection points (to use current jargon) where the campaign narrative could have twisted in a different direction. If Sanders had won in Nevada after New Hampshire, or had won in Ohio after his big comeback in Michigan, or had made any significant inroads among African-American voters … but with any of those scenarios we get in to the territory of, “If my grandmother had wheels, she’d be a wheelbarrow.”

You can slice and dice the results in various ways, and you can certainly argue that the Democratic nominating process is flawed and that Debbie Wasserman Schultz and the rest of the party hierarchy had their thumb on the scales for Clinton the entire time. But the rules were known to all sides in advance, and there’s no way around the fact that Clinton ground it out, bulldozer-style, in state after state. She won a lot more votes and she won a lot more delegates. Game over. Except — and this is the part that drives Clinton’s fervent supporters nuts — she never seemed like the protagonist of the story. With the exception of his razor-thin victory in Michigan, Sanders only won predominantly white and/or predominantly rural states. But he, and not the candidate who led the race from beginning to end, was perceived as the charismatic figure at the center of the Democratic drama.

Was that media sexism in action, or social-media sexism, or just the ubiquitous cultural sexism many of us don’t even notice? Was it sexist of me to compare Hillary Clinton to a bulldozer, just now? I’m not even sure. (I wouldn’t compare Bernie Sanders to a bulldozer. He’s more of a razorback hog.) Or was it just the intrinsic allure of the underdog, the outsider, the “colorful character” trying to beat the odds? Coupled, of course, with the sheer exhaustion of too damn much Hillary Clinton over too many years. Seriously, has there ever been a major political figure about whom everybody in the country has already made up their minds? Years ago, if not decades?

Hillary Clinton will be the Democratic nominee despite seemingly playing second fiddle to Sanders for many months. Now she’s in danger of serving as the straight man — sexism intentional — in the hilarious and horrifying saga of a certain other candidate soon to be nominated by a certain other party. (Which even now is getting cold feet and yearning for a do-over on the whole damn thing!) It’s a cruel possibility that the 2016 election will loom larger to posterity because the Republican Party set itself on fire and nominated a reality-TV gargoyle who barely qualifies as human than because we might elect our first female president. But let’s give Hillary Clinton full credit today. She has made history, she has demonstrated tremendous resilience, willpower and organization — qualities that, in women, often terrify men — and she has proved that you don’t have to be the star of the show to win the big prize.