Maybe the word "rapist" is a problem: The utility of nouns and verbs, or accepting who we are and what we do

Brock Turner's father and friend can't see him as "a rapist," even after he was found guilty. It's worth asking why 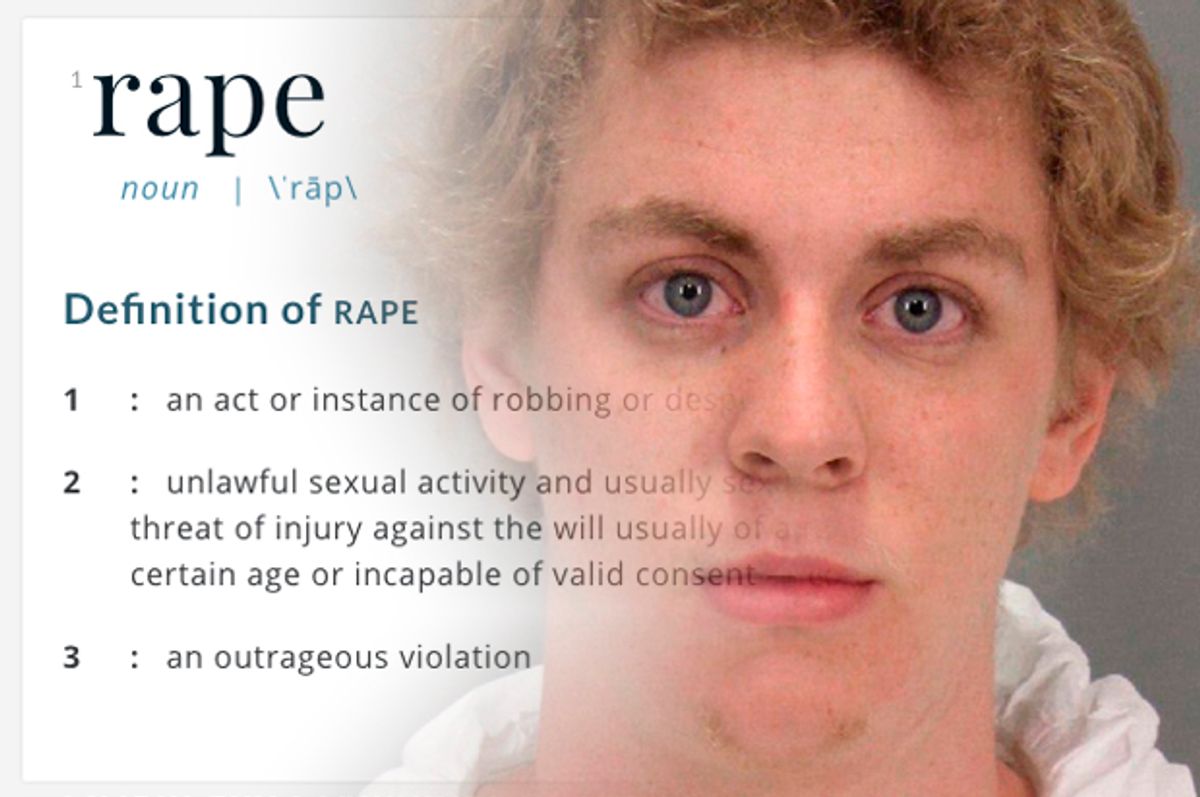 This week I have been thinking about the Stanford rape and about nouns and verbs.

Time is merciless and it moves in one direction. We are bodies in motion; our lives consist of the ceaseless accretion of infinitely small moments. We may look to the past for context and to the future for inspiration, but life is always happening in the precisely-right-now. So while nouns are comforting, firm and fixed and solid, it seems to me that verbs are more honest. We are none of us so steady as to be resolutely this or that. We are up and doing and, through action, constantly revealing ourselves, becoming ourselves.

This is wonderful; I am capable of anything. What separates me from a marathon runner is a hell of lot, but I could bridge that distance. If I get up tomorrow morning and run a mile, and then keep getting up and running miles and more miles for days and weeks and months, it’s not inconceivable that a year from now I could run 26.2, and by then, I might call myself a runner.

To do this might precipitate the radical transformation of my self-concept and public image, but the getting there would be much less existential than practical—it would consist of a lot of running.

Alternatively, if I get up tomorrow morning, run one mile, then never run again, the discontinuity of that event with my past or future won’t erase it from my history. Once I run a mile, I am always the woman who ran it.

This is terrifying; I am capable of anything. What separates me from a murderer is a hell of a lot, but if I get up tomorrow morning and shove someone off the platform at 14th Street that distance will zip itself up quick, long before a cop leads me back above ground to meet my future.

The moment is always a break from the past, but whether it annihilates the past or complicates it is sort of like asking if light is a particle or a wave. I am granular and I am continuous. If I shove a stranger off a train platform tomorrow morning, I will always be the person who did that—but that doesn’t mean I’ll stop being the person I was before. To shove the stranger is to become both.

This is hard. To admit previously unimagined (and, perhaps, unimaginable) possibilities into our definitions of ourselves or others sometimes produces cognitive dissonance. But that we don’t always know how to integrate seemingly contradictory truths doesn’t mean one must be a lie.

You know women who have survived rape, whether or not you know you do. And statistics tell us that the majority of victims know their rapists. A coworker, a friend, a date, an intimate partner. A boy at a party.

Logic tells us this must mean you know men who have raped women. Coworkers, friends, fathers and brothers and sons.

This is harder to accept.

I wonder if our difficulty accepting it has something to do with our desire to think of our identities as firm and fixed and inviolable, allowing for certain kinds of actions and not others.

In a letter to Judge Aaron Persky, Brock Turner’s childhood friend Leslie Rasmussen wrote, “This is completely different from a woman getting kidnapped and raped as she is walking to her car in a parking lot. That is a rapist. These are not rapists. These are idiot boys and girls having too much to drink and not being aware of their surroundings and having clouded judgment.”

She’s comparing what took place last year — read Jane Doe’s own letter to Turner, if you haven’t — with a hypothetical situation she conceives as less ambiguous (never mind the documented fact that most rapes are not committed by strangers), but I wonder if her classification has more to do with her sense of her friend and what he is capable of, than with any serious considerations of what happened that night and what it meant.

If Brock Turner had stolen a car, no amount of protestation from family and friends that “Brock is not a car thief” would confuse police or judge or jury (or Rasmussen, or Brock) about the fact of what occurred. A car thief is a person who steals a car. Even if he never stole one before. Even if he never steals one again. Or say he drove the car and crashed into Jane Doe; his own inability to integrate the horrible event and its irretrievable consequences into the story he’s telling himself about his life wouldn’t make the decision to drive drunk any less unambiguously criminal.

That people want so badly to make Jane Doe complicit in her own rape is, sadly, a predictable reaction, one that reflects our particularly contorted attitudes about women and men and sex, about women's agency over their bodies, about power and entitlement.

In February this year Rebecca Solnit, who has written more frequently, urgently, and persuasively about the cultural forces that promote and enable violence against women than any other writer I know, published an essay about the passive voice called “The Case of the Missing Perpetrator.” She was responding to the release, by the Centers for Disease Control and Prevention, of a new set of guidelines concerning the consumption of alcohol by women, widely viewed as (laughably, troublingly) paternalistic; and to the (curious, dangerous) rhetorical tendency of reporters to disappear, say, fathers from the causal chain of events resulting in “fatherless children,” or rapists from stories involving “victims of sexual assault.”

“…the passive tense,” she writes, “is so often a cover-up and the missing subject in a circumlocutionary sentence is often the guilty party… In sane worlds and grammatically coherent narratives, violence has a cause, and that cause has agency and consciousness.”

It’s is a forceful, nuanced argument for restoring subjects to ambiguous sentences, and perpetrators to the crimes they describe:

“Language matters,” she writes. “We just had a big struggle around the language about rape so that people would stop blaming victims. The epithet that put it concisely is: rapists cause rape. Not what women wear, consume, where they go and the rest, because when you regard women as at fault you enter into another one of our anti-detective novels or another chapter of the mystery of the missing protagonist. Rape is a willful act, the actor is a rapist. And yet you’d think that young women on campuses in particular were raping themselves, so absent have young men on campuses been from the mystificational narratives. Men are abstracted into a sort of weather, an ambient natural force, an inevitability that cannot be governed or held accountable. Individual men disappear in this narrative and rape, assault, pregnancy just become weather conditions to which women have to adapt. If those things happen to them, the failure is theirs. This training begins early. Girls in middle and high school even now, even in supposedly progressive places like New York and San Francisco, are told their forms and garments cause male behavior. Who is responsible for the behavior of boys in these narratives about spaghetti straps and leggings? Girls.”

I agree with her entirely. (It’s troubling to imagine who wouldn’t.) At the same time, lately, when I read the public discourse about stories like this one, I begin to wonder if the word “rapist” is more distracting than useful, more an excuse to stop engaging than an occasion to confront the truth:

“My son/brother/boyfriend/husband/friend isn’t a rapist, so what happened to that woman can’t have been rape.”

Or: "I am not a rapist, so what happened between us that night can't have been rape."

Or even, heartbreakingly: “He is not a rapist, so what happened to me can’t have been rape.”

Verbs seem to permit less space for obfuscation. To rape someone is to penetrate them without their consent. “Without their consent” includes those situations in which a person is not capable of giving it. To commit a rape, you have to rape someone. While you are raping someone, you are committing a rape. After you rape someone, you are a person who has raped. Whether or not this behavior is consistent with your reputation, your past or future behavior, or your self-concept matters not at all, not when it comes to sorting out the facts of what occurred during the moments you put yourself inside another person without their permission.

Our criminal justice system was designed to adjudicate crimes, not people. It is concerned with verbs, not nouns. Brock Turner’s father wants the judge to remember that his son is bright and loving and full of promise, as though proving those things would rule out the possibility of his also being guilty of sexual assault. Women everywhere know those things aren’t mutually exclusive. The fact is, most victims of sexual assault know their assailant. That their assailant may not know himself as such is infinitely more troubling.

Sarah Lunnie is a writer and new play dramaturg in New York.