Stop comparing Bernie Sanders to Ralph Nader: If Clinton loses she has only herself to blame

If the Democrats want to win over Sanders voters, it's going to take more than shaming them for not falling in line 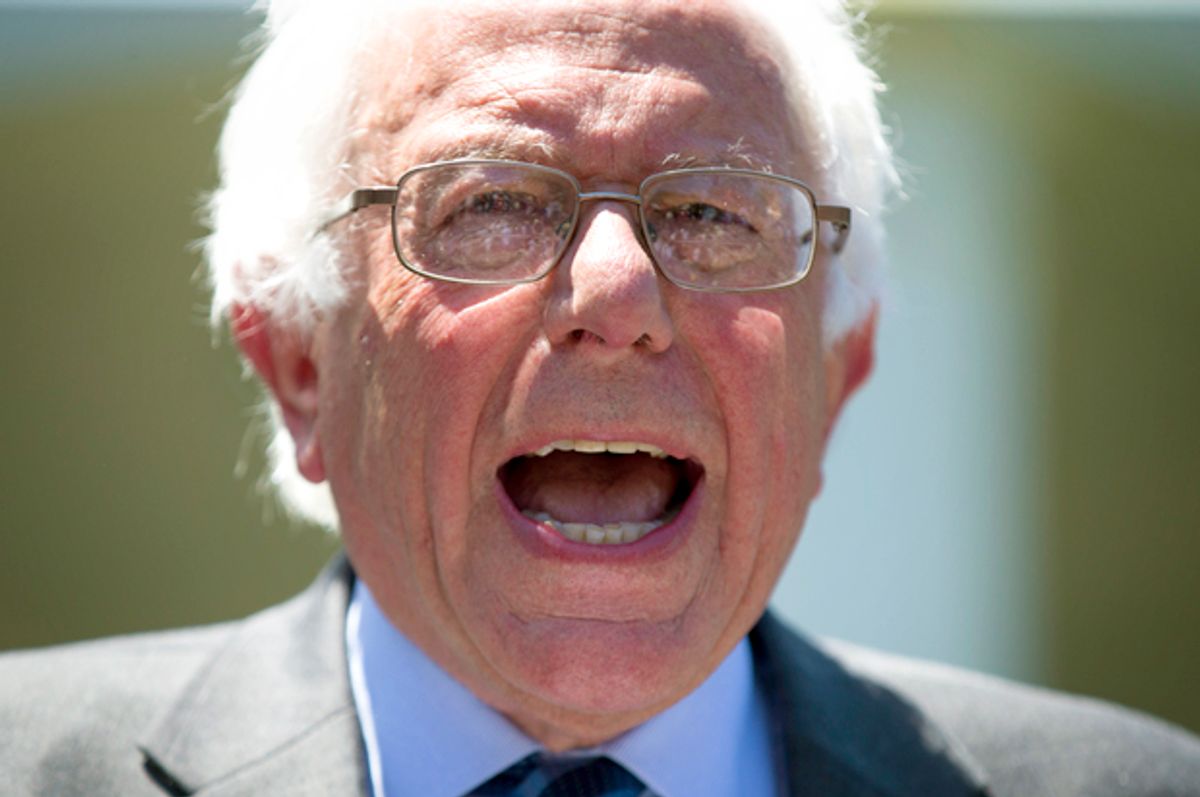 Bernie Sanders' noble effort disgraced by his own stubborn bitterness! And so come the personal Facebook posts and pundit analyses. It's over. Sanders lost, at least in the most proximate sense, because he didn't win enough votes. Sanders knows this. Then why won’t he drop out? Everyone should take a deep breath: he didn't just roll over and endorse Clinton on Tuesday night because what comes next is really complicated. Clinton’s endorsement of Barack Obama in 2008 is frequently cited. That contest, however, was not an ideological battle waged in significant part by people who do not consider themselves Democrats.

And so a political revolution is not an easy thing to unwind, and that’s especially true if the long-term goal is to not unwind it but rather help it transition to a new context with different goals. Angry Clinton supporters and deflated Sanders fans should take a cue from the Clinton campaign: notably, she's been careful not to be viewed as trying to push Sanders from the race. Clinton knows that she and the Democratic Party have a tenuous hold on Sanders voters, especially young people watching an idealistic campaign crash upon the shoals of unpleasant business-as-usual. This makes Sanders' job a very tough one. If he folds too soon and capitulates too much, it will be viewed by many supporters as a sell-out. If he charges on too hard, the media, opponents and even less-ardent supporters will paint him as a sore loser.

This is a hard needle to thread. Pushing Sanders out won’t change the basic reality that Sanders and the Democratic Party have overlapping but by no means identical goals moving toward November, and that Sanders' constituency is a heterogeneous one. Uniting the party is the party’s goal. For Sanders, it’s a small and rather risky piece of something much bigger.

Establishment liberals, however, believe that the left can be won over to their cause via personal insults and fear mongering. But real life is not a hot take, and on the everyday-voter level, political persuasion by hectoring simply doesn’t work. Stop the Ralph Nader comparisons: Sanders ran as a Democrat, not as an independent or third-party candidate, and if Clinton loses she has only herself and the establishment to blame. It’s only June and many are already laying the groundwork to blame Sanders if Trump somehow wins.

At the end of the day, whether you like it or not, most Sanders backers will vote with Clinton to defeat Trump — some happily. A small number of leftists will vote Green, or for someone else, or for no one. Some undetermined number, including a handful of misguided revolutionaries, but mostly, I think, everyday working people, will vote Trump.

Sanders does not decide what happens to his voters, though he does have a lot of influence. At the very least, he must give D.C. residents a chance to cast a ballot: the city that has neither representation in Congress nor the right to self-governance, and Democrats should not deny Washingtonians what little franchise they have. And I don’t quite get why Sanders can’t wait for his delegates to cast a ballot at the convention before conceding. Thousands are coming to Philadelphia, and if the DNC does not give them an outlet for their grievances on the convention floor they will seek one where they can.

Sanders didn’t lose because of superdelegates. He lost because he didn’t win as many votes. That said, Sanders supporters are not wrong to view the deck as stacked: The party, big donors and the media have been dead set against him from day one. Focusing too much on those injustices, however, will make it difficult for the left to see clearly that, despite this campaign’s historic success, it still has work to do to win over a majority. If the left wants to win, that’s a lesson it needs to learn.

The vast majority of Sanders voters want to defeat Trump. But subsuming the Sanders movement to that goal, and to the Clinton campaign, won’t work. Most Sanders voters might vote for Clinton, but they won’t join her campaign. The establishment must accept that the very voters it needs to win over to beat Trump are still committed to their overthrow and the transformation of American politics.

The most important thing that Sanders must accomplish is to help convince young people experiencing their first political defeat that this is truly one of the American left’s greatest victories. Democratic socialism is no longer a dirty word. It’s a mainstream aspiration.