The Art of the Steal: Report suggests Trump cheated hundreds of workers out of pay — he'd screw voters just the same

USA Today found hundreds of workers alleging Trump didn't pay them, fleshing out his image as a cheater and a thief 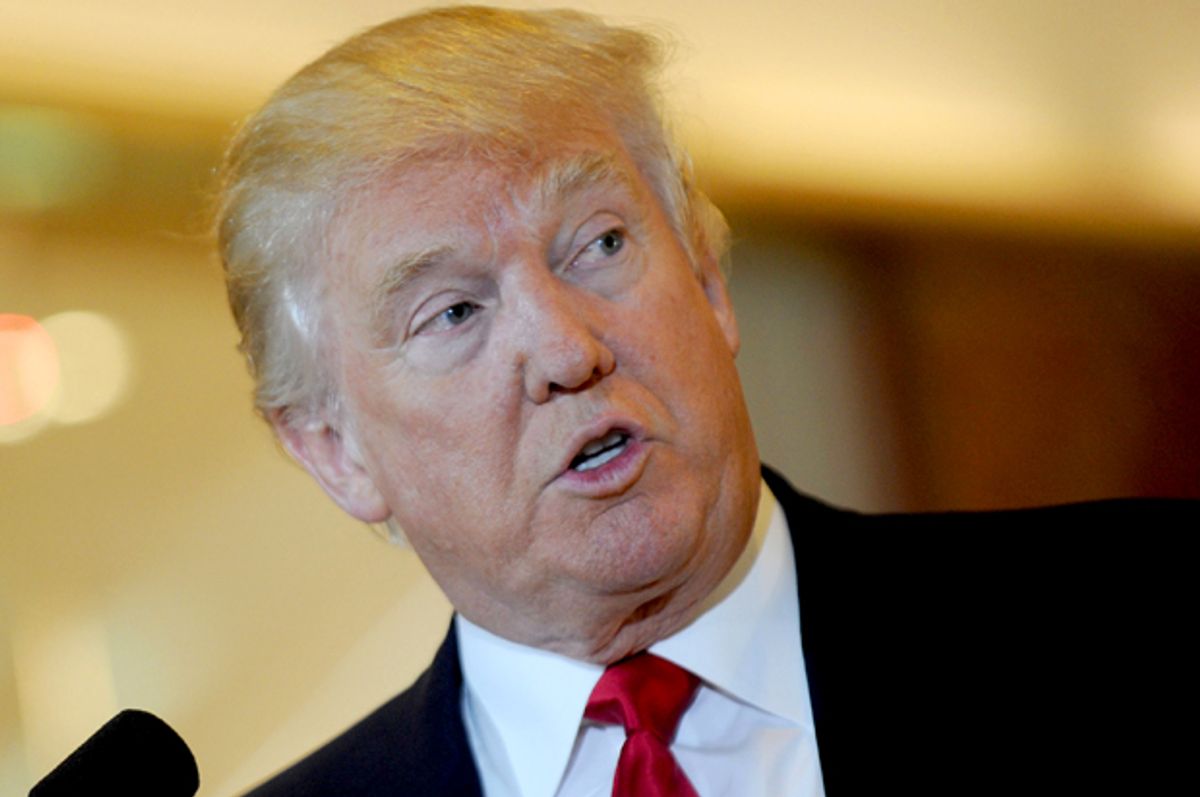 Right on the heels of a week of bad press over his scam school, Trump University, Donald Trump is facing yet another round of accusations that he is in the habit of making people big promises to get something out of them, and then refusing to hold up his end of the bargain.

Steve Reilly of USA Today, in a thoroughly researched expose of Trump's business practices, found literally hundreds of people who say that they did work for Trump in the past and, when the bill came due, he simply refused to pay for much or all of it. If they sued to get their money, Trump simply wore them out in court, using his greater assets to tie them up so long they gave up lest they go bankrupt trying to settle a single bill.

"The number of companies and others alleging he hasn’t paid suggests that either his companies have a poor track record hiring workers and assessing contractors," Reilly writes, "or that Trump businesses renege on contracts, refuse to pay, or consistently attempt to change payment terms after work is complete as is alleged in dozens of court cases."

Reilly found 60 lawsuits against Trump for refusal to pay his bills. He also found that Trump's businesses have been cited 24 time by the Labor Department for failure to pay people. On top of that, there were 200 mechanic's liens, which are filed when a person hires a contractor and then reneges on payment after the work is completed.

"On just one project, Trump’s Taj Mahal casino in Atlantic City, records released by the New Jersey Casino Control Commission in 1990 show that at least 253 subcontractors weren’t paid in full or on time, including workers who installed walls, chandeliers and plumbing," Reilly writes.

Trump's alleged refusal to pay bills doesn't really seem to be about saving money, either. (Not that "saving money" is a good reason to steal from people.) After all, one of his strategies to get out of paying the bills is to tie people up in court so long that they run out of money, a strategy so expensive that it seems like it would just be cheaper to pay them in the first place.

Instead, as one woman, who alleges that Trump shorted her $735,212 in real estate commissions, says, the decision not to pay appears to be based on "whimsy". Which lines up with what we already know about Trump: He likes to dominate people and enjoys feeling like he got one over on someone.

Knowing what we do about Trump's personality, it would make sense that he would enjoy stiffing someone on the bill not to save money, but just to watch how helpless they are and to enjoy how much power he has over them.

As Jesse Singal at New York magazine points out, Trump is on the record bragging about how he wriggles out of paying people in full.

"I've had many people that when they work for me they get very rich," Trump told Reuters back in November, but "sometimes I renegotiate."

"I'll do that with probably 10 or 15 percent of contractors," he said, adding credence to the theory that he stiffs people on the bills arbitrarily.

Now, obviously bargaining and negotiating with people on payment is part of business, but it's usually done before the person starts, much less finishes, the work. But Trump was very clear: He waits until the work is finished before he declares that he's been "overcharged", at which point he reneges on the bill.

This story fits very neatly into the ongoing controversy over Trump University, where Trump is being accused, by prosecutors and former students, of charging people thousands of dollars for a supposed education in real estate investment, an education that they never actually got.

It paints a picture of a man who is willing to make all sorts of promises to get something out of you, and then, once he has it, he takes the money and runs, leaving you with nothing.

Trump is a known bully, after all. He especially loves running around, puffing out his chest and talking about how good he is at "deals", which is clearly code for "screwing people over".

And, like most sleazy people, he assumes everyone else is just as dirty as he is, which is why he runs to court at the drop of a hat, crying foul over business transactions that any sane and sober person would realize were actually quite good for him. But his rock solid belief that everyone's out to get him is rooted not in reality, but almost certainly in the fact that, as a cheater, he thinks everyone else is a cheater, too.

The biggest problem for the opposition team at the Hillary Clinton campaign, if you can even call it a problem, is that Trump offers a plethora of riches for them, when it comes to telling a story of why their opponent is bad for the country. The issue is narrowing it down: Is it a temperament issue? The racism? The sexism? The ignorance? The problem with giving a bully the nuclear codes? His utter rejection of the diplomatic skills necessary to the office?

But the past week suggests that a narrative is shaping up that the Clinton campaign can ride all the way to November: Trump is a bully who loves to cheat people. He makes big promises to get what he wants out of you, and then takes off in the night, having stolen all the silver and leaving you with nothing. He did it in business, and he'll do it to the voters.

Trump's campaign is as much a ruse as Trump University or his promise to contractors that he would pay them for work. His staff is anemic and his strategy appears to be little more than making a lot of lazy phone interviews and tweeting stuff. He has no real policy agenda or ideas about how to run the country.

Trump just intends to bullshit you into voting for him, at what point he'll likely renege on his promise to serve the country, just like he allegedly reneged on the money he owed hundreds of people. Instead, like the cheater and bully he is, he'll probably just use the White House for personal gain while blowing off his actual duties as president.